We are officially designating The Daily Beast as the Worst #NoMames Media Outlet to cover the destruction Hurricane María caused on Puerto Rico this week. Here’s why.

In a Thursday article called “Famed ‘Despacito’ Neighborhood Destroyed by Hurricane Maria as Puerto Rico Struggles in the Dark” (seriously, that is the headline), writers Christopher Dickey, “a veteran foreign correspondent” writing from France (yup, not making that up either) and Puerto Rican journalist Pablo Venes (yup, not making that up, either) produced this copy:

Yes, that is actual copy that was published.

By Friday morning, The Daily Beast removed the text and posted this at the end of the story:

Editor’s Note: This story has been updated to incorporate new reporting and information as of 11:00 a.m. EDT on September 22, 2017. In addition, a paragraph that referenced a lyric in “Despacito” was removed earlier after The Daily Beast concluded that it could be construed as insensitive to the victims of Hurricane Maria.

Here’s the question: why didn’t The Daily Beast realize that it f-ed up in the first place, and while we are asking, is that now weakest editor’s note ever? (“that it could be construed as insensitive to the victims of Hurricane Maria”)

And it’s not like the story changed its headline. It’s still there, or its lede: 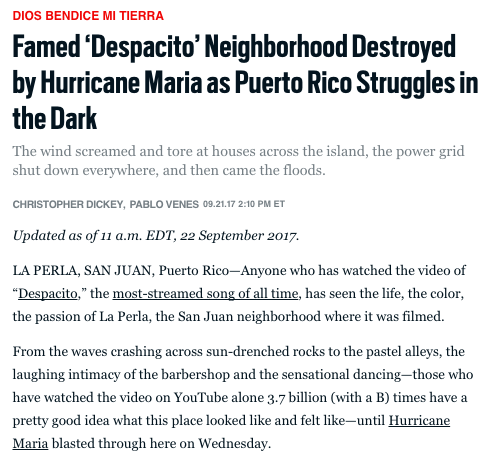 Did we mention that one of the writers is based Puerto Rican, living there?

Because actually REPORTING about La Perla and giving people more historical context about this marginalized neighborhood in San Juan is NOT noble enough? Nah, better to have some guy writing from France and his Puerto Rican sidekick to prove how “diverse” The Daily Beast is, essentially mock tragedy for internet hits.

We reached out to The Daily Beast to share more than their editor’s note. They haven’t responded yet.

And while we are at it, toss in The Daily News for “caring” as well. And you don’t get off the hook, USA Today: 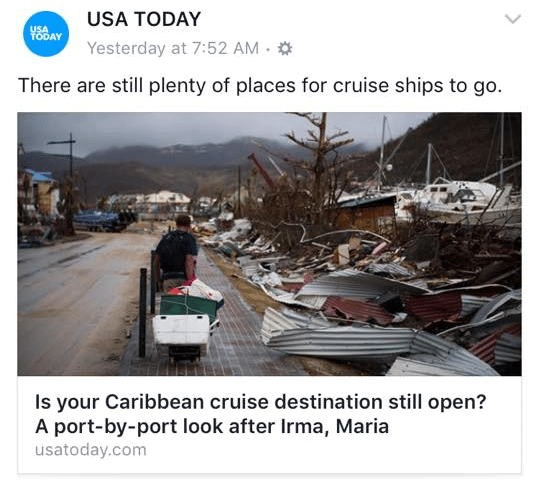