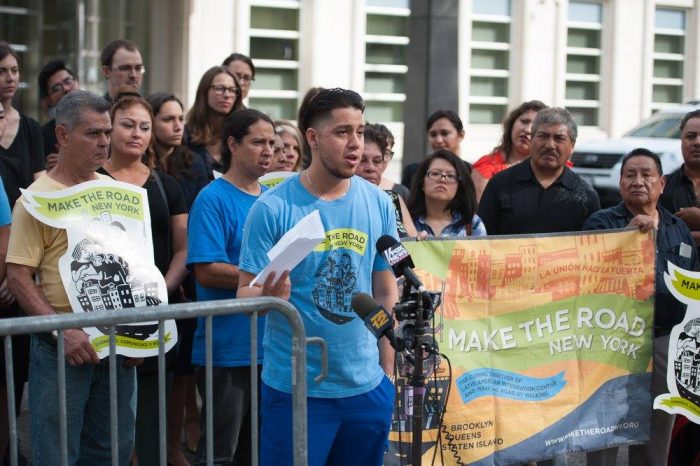 (Via Make the Road New York)

Last week, a federal judge in New York ordered the expedition of a lawsuit filed against the Trump administration for its rescinding of the Deferred Action for Childhood Arrivals program, also known as DACA. U.S. magistrate judge James Orenstein ordered a rapid-fire discovery schedule last Tuesday September 27 in an attempt to improve the plaintiffs’ chances of getting relief from deportation as the government’s March 5 deadline looms.

On September 5, the federal government rescinded the Deferred Action for Childhood Arrivals (DACA), a program that granted worker permits and deportation protection for people who entered the country before the age of sixteen. The government released a deadline that instructs recipients whose status expires before March 5, 2018 to apply for a new permit by October 5. More than 800,000 people are currently protected by DACA in the country.

Martin Vidal Batalla and Make the Road New York filed a lawsuit against President Trump for the termination of DACA in the Eastern District of New York earlier in September. They are suing the government because they claim the decision violates the Administrative Procedure Act (APA) and the Fifth Amendment of the Constitution.

According to the complaint filed by the plaintiffs, APA prohibits agency actions that don’t demonstrate good reasons for changes in policy. The lawyers cite previous government memos filed in 2012 and 2016 that say that immigrant youth lacked the intent to violate the law. They also argue the decision was “unconstitutionally motivated by bias against Mexicans and Latinos and violates the equal protection component of the Due Process Clause of the Fifth Amendment,” according to court documents.

Make the Road is suing on behalf of its 11 staff members with DACA and clients who will no longer be able to file new applications or renewals when the program is withdrawn, according to a press release. The plaintiffs are represented by Make the Road New York, the National Immigration Law Center, and the Worker and Immigrant Rights Advocacy Clinic at Yale Law School.

The expedited discovery schedule, in which each party is required to produce certain documents or make certain officials available for questioning, is an attempt to resolve the lawsuit before the deadline next year. Emily Villano, from the Worker and Immigrant Rights Advocacy Clinic at Yale Law School which represents the plaintiffs, said that an expedited schedule constitutes a win for the legal counsel.

“The magistrate judge James Orenstein green lighted a frisk discovery schedule because the court clearly believes that it is necessary for us to get a full and complete record in order to determine whether the Trump administration terminated DACA based on inadequate reasons and anti-Latino animus, which is what we believe,” said Villano.

The Department of Homeland Security’s memo that announced the elimination of the program cited the program’s “legal and constitutional defects” including the use of executive action by former President Barack Obama. Under the current DACA decision, there will be no more renewals of permits that expire after March 5. Villano says that without their worker documentation, thousands will be vulnerable to deportation.

Villano said that during the court hearing, the defense made it clear that they didn’t think any discovery, expedited or otherwise, was appropriate in the case. A few weeks ago, the U.S. Department of Justice filed a letter to the court arguing that discovery was inappropriate in the litigation. The defense argued that “a court reviewing an agency decision is confined to the administrative record compiled by that agency when it made the decision” and that the fact-finding capacity of the district court is thus “typically unnecessary to judicial review.”

However, the court ruled in favor of the plaintiffs that argued in a separate letter to the court that a stay of discovery would leave insufficient time to conduct discovery, briefing, and arguments prior to the planned termination of DACA which would jeopardize “the livelihoods and well-being of hundreds of thousands of people.”

Plaintiff Martin Batalla, 26, is a DACA recipient that grew up in Brooklyn. He’s lived in the borough since he was 7 years old and is a member of Make the Road New York. He says the elimination of the DACA program has dealt a heavy blow to his plans for the future.

“Losing DACA would have a dramatic impact on my life. It would prevent me from being able to take on major professional or academic goals, make me unable to work legally, and put me at risk of being deported and separated from my family,” said Batalla in a Make the Road New York press release.

“This decision by Donald Trump is a direct attack on immigrant youth like me and on our families, and it’s based on one thing: the racist beliefs of a president who has been attacking Latinos and Mexicans since the first day of his campaign,” he added.

The legal counsel hopes to prove that anti-Latino animus informed the Trump administration’s decision to cancel the program. They hope the expedited discovery schedule will allow them to submit their case in the coming weeks.

“Our position is to prove that the decision to terminate DACA was based on bad reasons and legal analysis and on the racist attitudes of the president. We’re going to need proof of that, and that’s what we’re after during discovery,” said Villano.

Both parties will submit documents for discovery by December 15 and are due back in court on January 18, 2018.

Nidia Melissa Bautista is a journalist and graduate student at New York University. She’s originally from Los Angeles and reports on gender, human rights and migration.