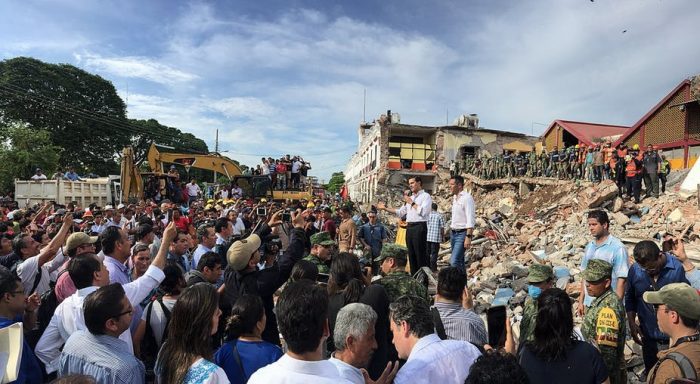 Undocumented migrants are among those helping to rebuild the hardest-hit areas of Oaxaca state, where federal aid has been slow to trickle down. (Presidencia de la República Mexicana CC-by-2.0, CC BY-SA)

After two earthquakes that left more than 450 dead and 150,000 houses damaged, my home country of Mexico faces huge challenges in recovery.

According to official estimates, the country will need more than 30 billion pesos (around U$2 billion) to rebuild. The resources required for Mexico’s recovery are almost double the country’s annual gross domestic product, according to World Bank figures.

Manpower, at least, has not been an issue. Search-and-rescue teams from several countries —including Chile, Colombia, Israel, Japan, Panama, the United States and Spain— arrived in the days after the earthquakes to dig survivors out of the rubble. Dozens of foreigners who reside in Mexico also joined the Mexican volunteers in their rescue efforts.

Among these international brigades was a group of undocumented Central American migrants who, interrupting their travel northward to the U.S., stayed in Mexico to help clean up debris and assist the victims.

Their efforts have been largely focused in two of the cities most impacted by the historic September 7 quake, Juchitán and Asunción Ixtaltepec, in Oaxaca. But after the September 19 Mexico City earthquake, some members also volunteered to help dig out survivors from the rubble of the nation’s capital

With anti-immigrant sentiment on the rise in both the United States and Mexico, which is now deporting Central American migrants in record numbers, these undocumented Good Samaritans are changing the Mexican narrative on migrants—brick by brick, rescue by rescue.

The nearly 50 Central American migrants assisting in Oaxaca’s earthquake recovery effort are staying at Hermanos en el Camino (Brothers of the Road), a Catholic-run shelter in hard-hit Isthmus of Tehuantepec.

Felipe González, a volunteer at the shelter, told me via telephone that after the urgent rescue efforts ended, they have continued their work, distributing aid among those who lost their homes.

The migrants who organized this aid brigade are from Honduras, El Salvador, Nicaragua and Guatemala, and they have diverse backgrounds, but what they have in common —both with each other and with Mexican earthquake victims— is a history of hardship.

According to a May report from Doctors Without Borders, almost 40 percent of the roughly 500,000 Central American immigrants the organization surveyed in Mexico fled their countries after experiencing physical attacks, threats against themselves or their families, extortion or forced gang recruitment.

The Brothers of the Road shelter is located in Ciudad Ixtepec, one of the stops on the main route that Central American immigrants heading north used to follow through Mexico. Normally, the facility serves to provide relief to immigrants who ride atop “La Bestia” —that is, the Beast, the Mexican network of freight trains— to travel to the U.S.

Normally, any savvy immigrant passing through Mexico hopes to avoid detection. At the behest of the U.S., Mexico has been cracking down on undocumented Central American migrants, policing train tops with drones and increasing travel speeds from 18 to 37 mph. As a result, a new maritime route through the Pacific is now opening up.

The Trump administration has kept up the pressure. In a letter sent to Congress and Senate leaders on October 8, the U.S. president requested that the Department of Homeland Security be granted broad powers to assist “partner nations” in “removing aliens from third countries whose ultimate intent is entering the United States.”

Tough border enforcement isn’t the only reason that Central American migrants normally aim to hurry through Mexico under the radar. Nearly one-third of women surveyed by Doctors Without Borders in 2014 had been sexually abused during their journey, and 68 percent of all migrants were victims of violence.

Migrants are among the many victims of Mexico’s drug war. In 2010 and 2011, 265 migrants from Central and South America were murdered by the Zetas cartel in the northern Mexican town of San Fernando, Tamaulipas, just 55 miles from Texas.

Even knowing the dangers presented by both the state and the drug lords, the guests at the Brothers of the Road shelter risked everything to pitch into the rescue effort after the quake that hit Oaxaca and Chiapas, two of the poorest states in Mexico, in September.

“We’re immigrants in search of the American dream,” Denio Okele, an Honduran migrant, explained to NBC News. But, he continued, “we arrived in Oaxaca, and an earthquake occurred. We are thus helping the people who need assistance.”

Their reasons for helping range from solidarity and compassion to gratitude. “We have received a lot support from people, so we want to help them,” Wilson Alonso, also from Honduras, told the Spanish newspaper El País.

The sacrifice of this migrant humanitarian aid team has earned them hero status in Mexico. Like other volunteers who dug their neighbors free from the rubble with their bare hands, they have been lauded on social media and interviewed by reporters. And for once, the legal status of a group of Central Americans was not the story.

As José Filiberto Velásquez, a Catholic priest at the Brothers of the Road shelter, told one Mexican reporter, these migrants have shown Mexicans through their actions that, quite simply, “immigrants are good people.”

Pact of the Defeated

The Central American migrants’ story is just one example of the spirit of national solidarity that carried Mexico through the days after the two killer September quakes.

Social media activists quickly organized, tweeting information on exactly what assistance or supplies were needed, and where, under the hashtag #Verificado19S.

After a frightful year in which citizens also lived through half a dozen high-profile government corruption scandals, one of the world’s highest murder rates and nonstop insults from the president of the United States, Mexico has emerged from its two natural disasters with a renewed sense of national pride.

Even though construction began on eight prototypes of Trump’s proposed border wall in San Diego, California, just six days after the second earthquake, the mood in Mexico today is almost optimistic.

The solidarity on display recalls what Argentinian writer Ernesto Sábato calls “the pact of the defeated.” In a world full of “horror, treason and envy,” Sábato writes in his memoir, “Antes del Fin,” it’s often “the most unprivileged part of humanity” that shows everyone else the path to salvation.

Right now in Mexico, earthquake-impacted locals and undocumented migrants alike are working together to rebuild their futures. In facing the years of hard recovery and U.S. antagonism ahead of it, a “pact of the defeated” may be as good a starting point as any.

Luis Gómez Romero teaches at the University of Wollongong