Editor’s Note: An original version of this post was published on the author’s Medium page. National Nurses United has given us permission to republish the post here. 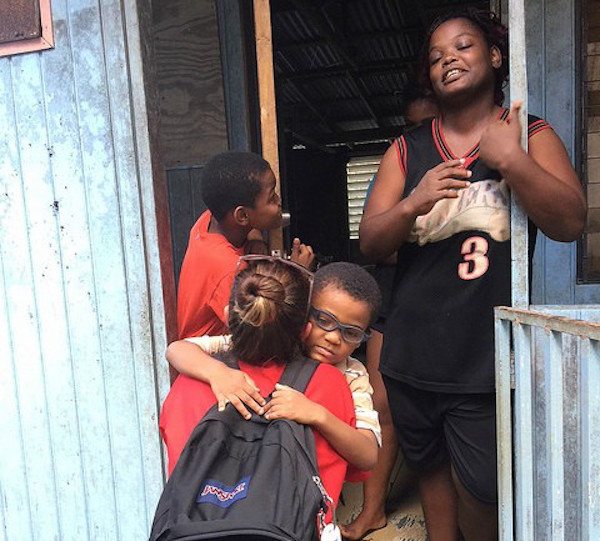 On the southern edge of San Juan municipality, where there has been no contact with FEMA, Red Cross or any official relief, this family has been sleeping in their roofless house on soaking wet furniture for weeks. The youngest child has (unsurprisingly) developed a rash. When volunteer RN Lucia Lopez gave the mother hydrocortisone cream, she burst into tears. (Photo provided by author)

Crowdfunding. A Costco Card. The water in a nurse’s own backpack. These are the resources to which volunteer nurses on the ground in Puerto Rico —where 85 percent of the island is still without power and where the official death toll has risen to 48 (with the real toll expected to rise much higher)—  have been forced to turn in recent weeks, to keep hurricane victims alive, even for a few additional days.

“The people over here in Puerto Rico are dying. We have a healthcare crisis right now,” said National Nurses United (NNU) vice president and Registered Nurse Response Network (RNRN) volunteer Cathy Kennedy, RN. “Nurses have been going out into communities, where all they ask for is water and food. And when you have to make a decision of who’s going to get the food today or the water—we shouldn’t have to do that. The United States is the richest country in the world. Puerto Rico is part of the United States.”

“There’s no power, there’s no clean water, many hospitals are closed, there’s no access to healthcare,” said Cyndi Evans, RN, also a volunteer with the Registered Nurse Response Network (RNRN)—a disaster relief project of NNU. “One of the nurses did a GoFundMe page, and her team found a Costco where ATMs had come back online. That team took $3,000 worth of goods to communities who hadn’t received any aid at all… I’m furious. [The people of Puerto Rico] are going to die.”

While the Trump administration has declared that the island territory of U.S. citizens “can’t be helped forever,” nurses like Kennedy and Evans are reporting back a horrifying reality: Meaningful federal relief for hurricane-decimated Puerto Rico has not yet arrived at all. Not by a long shot.

Kennedy described how one RNRN nurse, Vanessa Soldo, actually camped out this past weekend, sleeping, to keep watch over 20 cases of that were sitting, waiting to be delivered to needy communities desperate for water.

“After being told at one Costco there wasn’t any water yet, they found large flats of water they were willing to sell. Finally, they were able to purchase water [at another store],” said Kennedy. “Water is gold for the people of Puerto Rico, and I ask myself, where is FEMA?” 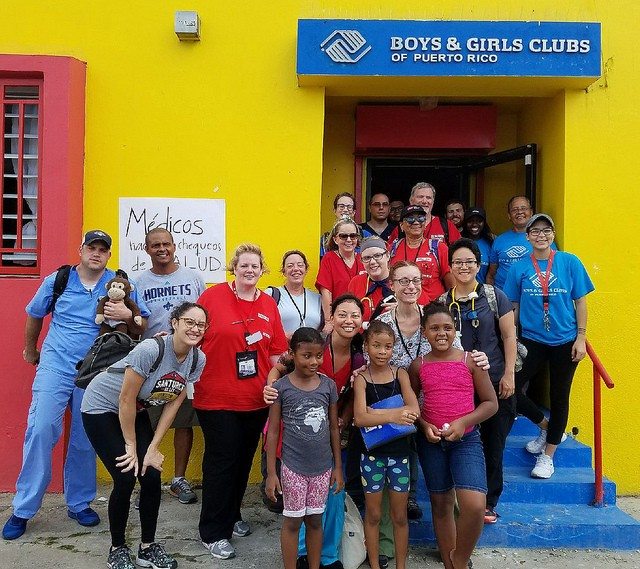 RNRN deployed 50 volunteer nurses to Puerto Rico on October 4, as part of an AFL-CIO deployment of skilled workers, to help with relief efforts. Nurses are beginning to return home, and their eyewitness testimonies should inspire horror, and, more urgently—action.

While the federal government claims that everything is going well in Puerto Rico, nurses describe a FEMA presence on the island that is sparse at best, and many times, ineffective. People are often standing in line for hours in blistering heat waiting for desperately needed water and food, only to finally see federal disaster officials with paperwork “to collect data,” rather than handing out critical supplies.

“FEMA set up a place where people impacted by the hurricanes could fill out an application to start the process to get money. The wait was four and a half hours, and at the end, they got one water bottle and a snack sized Cheez-Its,” said Evans.

Nurses report Puerto Ricans still living in roofless houses with soaked interiors, where dangerous black mold creates respiratory distress and illness—and also report outbreaks of leptospirosis, a deadly bacterial disease that has already claimed lives. According to the nurses, many Puerto Ricans are drinking untreated water from streams, while nurses move from municipality to municipality, desperately trying to do public health education on how to disinfect the water.

“These communities are at great risk of water-borne illness epidemics. They need clean water that is safe to drink,” said RN Erin Carrera, who described a trip nurses took to Utuado, a mountainous region in the center of the island, where weeks after hurricane Maria, many residents had still received no relief. “These conditions would not be tolerated in the 50 states. It is outrageous that we are leaving our fellow Americans with essentially no aid.”

In a letter last week to all members of Congress, NNU Co-Presidents Deborah Burger, RN and Jean Ross, RN called for Congress to take urgent action, calling the response of the federal government “unacceptable for the wealthiest country in the world.”

In addition to expedited government resources, Burger and Ross urged expedited human and financial resources be deployed to overcome the bottlenecks keeping help from reaching those in need, greater support from the Defense Department, including deploying boots on the ground to clear roads and deliver humanitarian aid, and cancellation of all debt to “prioritize the lives of Puerto Ricans over debt payments to Wall Street.” 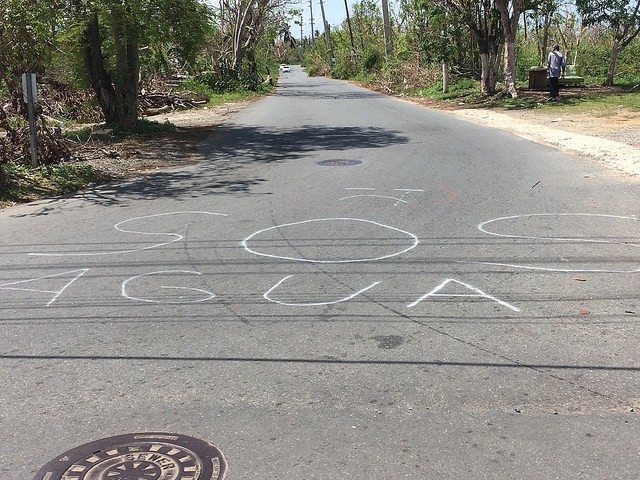 “SOS WATER”: RNs saw this in Vega Baja, Pueblo de Naranjitos, where residents have yet to receive any relief aid and are in dire need of water. (Photo provided by author)

Despite the national narrative that adequate aid is arriving in Puerto Rico, the RN Response Network knows the difference between what a typical disaster response looks like on the U.S. mainland vs. what nurses are seeing now in Puerto Rico.

RNRN volunteers have deployed to help in many major disasters — including Hurricanes Katrina, Rita, Sandy, and Harvey—and they have seen FEMA’s presence, on the ground, distributing supplies in Louisiana, in Texas. No federal rhetoric can gloss over these nurses’ real-life, eyewitness accounts that the Puerto Rico response comes up dangerously short.

“[The U.S. government] didn’t do this with Hurricane Harvey,” said Kennedy. “It’s shameful.”

The RN volunteers who donated their time, skills to help residents of Puerto Rico. (Photo provided by author)

Evans had to return early from Puerto Rico to her home in Santa Rosa, California, which was in the path of the deadly wildfires sweeping through Northern California. As she has driven around to volunteer at area shelters, she says she has been struck by the discrepancy in aid for the wildfire victims and aid for Puerto Rican hurricane victims.

“The response to the wildfires is completely different from the response to Puerto Rico. There are military people there [in Napa and Sonoma counties]. They have FEMA here,” said Evans. “I never even saw people in uniform in Puerto Rico.”

Without meaningful federal action now —today— nurses know the U.S. citizens in Puerto Rico will continue to succumb to the man-made, bureaucratic disaster in the wake of hurricanes Irma and Maria. 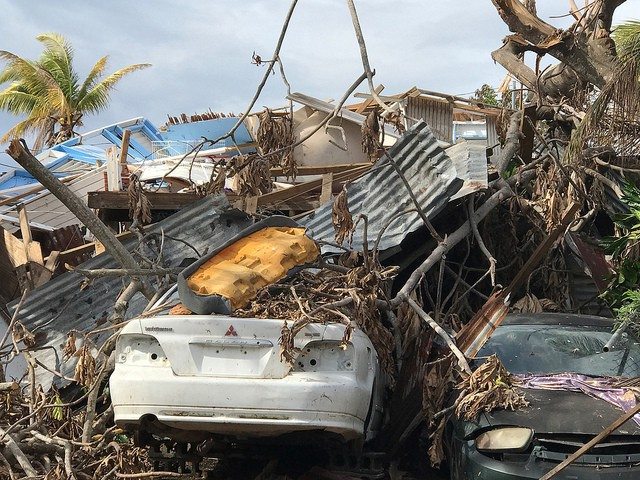 Some of the destruction RNs have witnessed in Puerto Rico. (Photo provided by author)

Today our team traveled into the center of island into the mountain towns of Utuado. These towns are so isolated that relief efforts have not made it into these areas. It was due to impassable roads. But the local community cleared most of the roads. People said we were the first relief group to come into the area … They’re struggling to get basics such as food, water and medicine. —Roxanna Garcia, RN 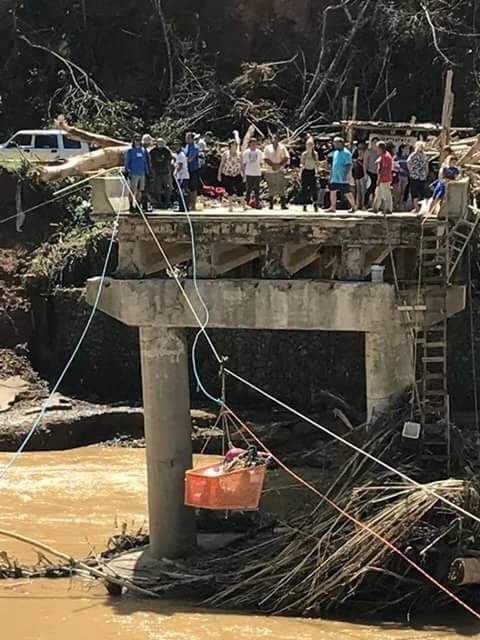 Where a bridge has washed out, community members have rigged a shopping cart on ropes to carry supplies to residents trapped on the other side. Where is FEMA? (Photo provided by author)

We couldn’t believe this is part of the United States. We did home visits in a low-income community with the public health liaisons who identify those in need and help them do basic blood pressure checks, blood sugar checks, refill their meds, etc. They have already had chronic diseases going on and now their environment is full of hazardous materials and sanitation is so poor. —Hau Cheng Yu, RN

[Nurses] went to a man’s home. He had no roof, all his belonging were soaking wet due to the rain and no tarp. He is living in a garage beneath where he’s in a 3×3 area. It’s an impoverished area with no access to clean water. There’s a lagoon behind the house where mosquitos frequent the area. There’s black mold built up in most of the houses on the second floor, which can cause upper respiratory infections, renal failure, and scarring of the lungs. The community center had bottles of water, but it is not sufficient for everyone and most people are using the water in their homes. There is a lack of supplies to even clean the black mold. There is a lack of relief communication and no FEMA in sight.  —Kent Savary, RN, regarding a team in San Juan, Playita near the Playita Community Center

Bonnie Castillo  is the Director of Health and Safety at @NationalNurses, and director of the RN Response Network. She is RN and healthcare champion who believes health care is a human right.