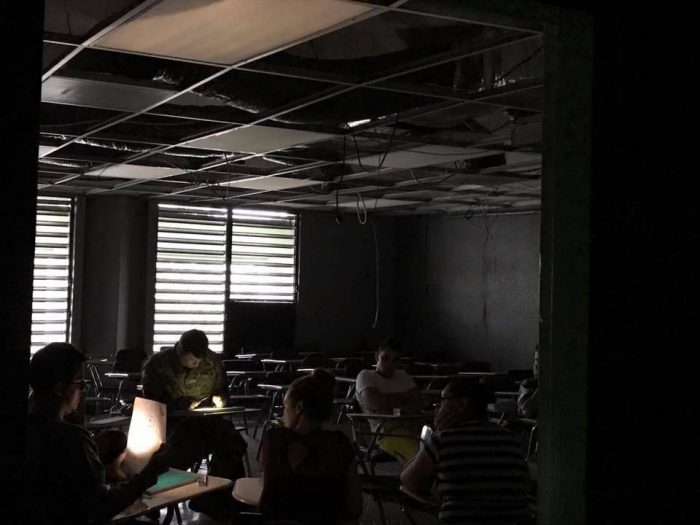 SAN JUAN, PUERTO RICO — By the end of this month, the University of Puerto Rico expects to open its main campuses in Río Piedras and Mayagüez. The Interamerican University resumed its classes on all of its campuses this past Monday. However, universities are facing mounting challenges due to the aftermath of Hurricane María.

The Student Council (CGERUM) at the University of Puerto Rico at Mayagüez is worried about students’ safety and well-being.

“There is a real concern about how students will be able to reach the campus and how they will return to their respective towns. The problem with the communications is something that has us very worried. This is why the CGERUM is compiling information about the status of all our fellow students, to know their concerns and their respective needs” José Andrés Benítez, vice president of the CGERUM, told Latino Rebels via a text message.

Most of the island is still without any electricity (currently just 19% of clients have power), making traveling from one coast to the other extremely tricky due to the lack of traffic lights. Some bridges have collapsed, the most recent near the town of Ciales. Even though most of the students of UPR Mayagüez are from the city and nearby towns, there is a large portion of students who come from all over the island, particularly in heavy affected zones, like the eastern region and the islands of Vieques and Culebra.

“We know a lot of the student housing in the city were greatly affected. It’s the duty of the CGERUM to communicate these facts to the administration so that they can make informed decisions,” Benítez added.

Benítez told Latino Rebels that although the town had been cleaned and power restored to the downtown area, where the campus is located, the latest round of torrential rains that have hit Puerto Rico, causing major flooding problems, have affected student housing areas, particularly the Mayagüez Terrace neighborhood next to the UPR campus.

The university is operational, even though there is damage to parts of it.

According to Benítez, the campus administration is conscious of the situation and “they will attend to every case individually.”

The metropolitan campus of Interamerican University, on the other hand, is dealing with the difficulties that arise from not having electricity. Located in Cupey, a neighborhood of San Juan, nearby road 1, the campus’ electrical generator failed and the university has been unable to fix it. This has created a problem. Most of the building is inoperable, and the different faculties have had to set up shop on the third floor lobby.

Areas like the library and cafeteria are shut down and unable to be used by students. According to an employee of the campus, the administration has made buying replacement parts a priority, but they have yet to arrive.

The administration recently announced they would be placing all their political science master program students in the law faculty building, which is located in Hato Rey, a few miles from the campus.

These examples are just a glimpse of what students in Puerto Rico have to deal with. Some have decided to leave the island, and lose their semester. This is the case of Vianca Rodríguez, a student at UPR Mayagüez and resident of nearby Añasco. Rodríguez has family living in Florida, and decided to leave the mainland and drop out of the university she has called home for the past few years.

“I think it’s selfish that the university has cancelled all exchange programs for next semester when it’s most needed. During Katrina, a lot of students were accepted in other universities while their universities would return back to a safe and normal environments for students physically and emotionally,” Rodríguez told Latino Rebels.

According to Rodríguez, UPR is not allowing students that have left the island to finish their semesters online. But asked about the subject, Benitez said that students need to “contact the Dean of Academic Affairs to work out their individual case.”

“Overall, UPR is not prepared and is doing this in order to not lose federal aid money or accreditations. It’s ludicrous and a lame excuse, because when natural disasters occur, all of that is waivered because these are circumstances out of control,” Rodríguez said.

According to information given to Latino Rebels by a department head at the Interamerican University, Middle States Commission on Higher Education (MSCHE) does give a period of time, but if a school does not resume promptly they are exposed to losing their accreditation.

For the UPR system as a whole, the whole situation with Hurricane María aggravates the accreditation status for its campuses, especially after the system suffered a prolonged strike that forced most campuses to finish their semesters during the summer.