Hours after the publication of a letter from 13 Democratic senators calling for the Department of Homeland Security to formally investigate Puerto Rico’s death count related to Hurricane María, a D.C. lobbyist saying he represented the Puerto Rican government contacted at least two U.S. senators’ offices on Thursday to question why such a letter was even written in the first place, Latino Rebels has learned.

According to sources familiar with the situation, VantageKnight founder Manuel Ortiz, whose bio lists him as “a prominent Democratic strategist and widely recognized as one of Washington’s top lobbyists” and “Puerto Rico’s go to guy in Washington,” made phone calls to the offices of at least two of the U.S. senators who signed the letter, expressing his disappointment that the senators would support such an investigation and citing that it would make the administration of Puerto Rico governor Ricardo Rosselló (also a Democrat) look badly and appear incompetent.

As of Thursday night, the Puerto Rican government still lists the official death count from Hurricane María at 48, although reporting from outlets both in Puerto Rico and on the U.S. mainland indicate that the number of people who died as a result of María could be in the hundreds.

The Thursday morning letter from 13 Democratic senators to DHS Acting Secretary Elaine Duke was part of a press release posted by the office of Senator Elizabeth Warren (MA).

“The official death count is currently 48,” the release said, “but the senators cited a comprehensive analysis of numerous media reports indicating ‘deaths of more than 450 additional people since the hurricane, and 69 people have been reported missing.'” (Editor’s note: the current number of people listed missing in Puerto Rico is now at 109.)

“The need for an accurate death toll is especially important because President Trump seems to be using the number of fatalities to determine the quality of the disaster response,” the release added. “Given President Trump’s recent threat to withdraw relief workers from Puerto Rico, it is crucial that he and the public not receive erroneously low fatality totals.”

When President Trump visited Puerto Rico on October 3, he praised the hurricane’s low death count of 16, a point Rosselló repeated during the visit.

A few hours after Trump left, Rosselló said the death count had risen to 34. It currently stands at 48.

Attempts to reach Ortiz for comment were unsuccessful. Sources who know of the Thursday calls did tell Latino Rebels that Ortiz expressed concern that the senators were trying to undermine Rosselló, a fellow Democrat. Ortiz, the sources said, also insisted that the Puerto Rican government’s official count was correct but offered no evidence that it would remain at 48. According to sources, Ortiz did not address why the letter from the 13 senators suggested that the death toll could be 10 times higher.

UPDATE, MAY 31, 2018
After not responding to Latino Rebels for seven months, Ortiz’ Twitter account engaged LR. Eventually our founder Julio Ricardo Varela followed up with tweet questions. In the exchange, Ortiz does not deny making calls, but he also was not clear about what our sources told him. Our founder had follow-ups. If more answers come out of this, we will share. Here is the full exchange: 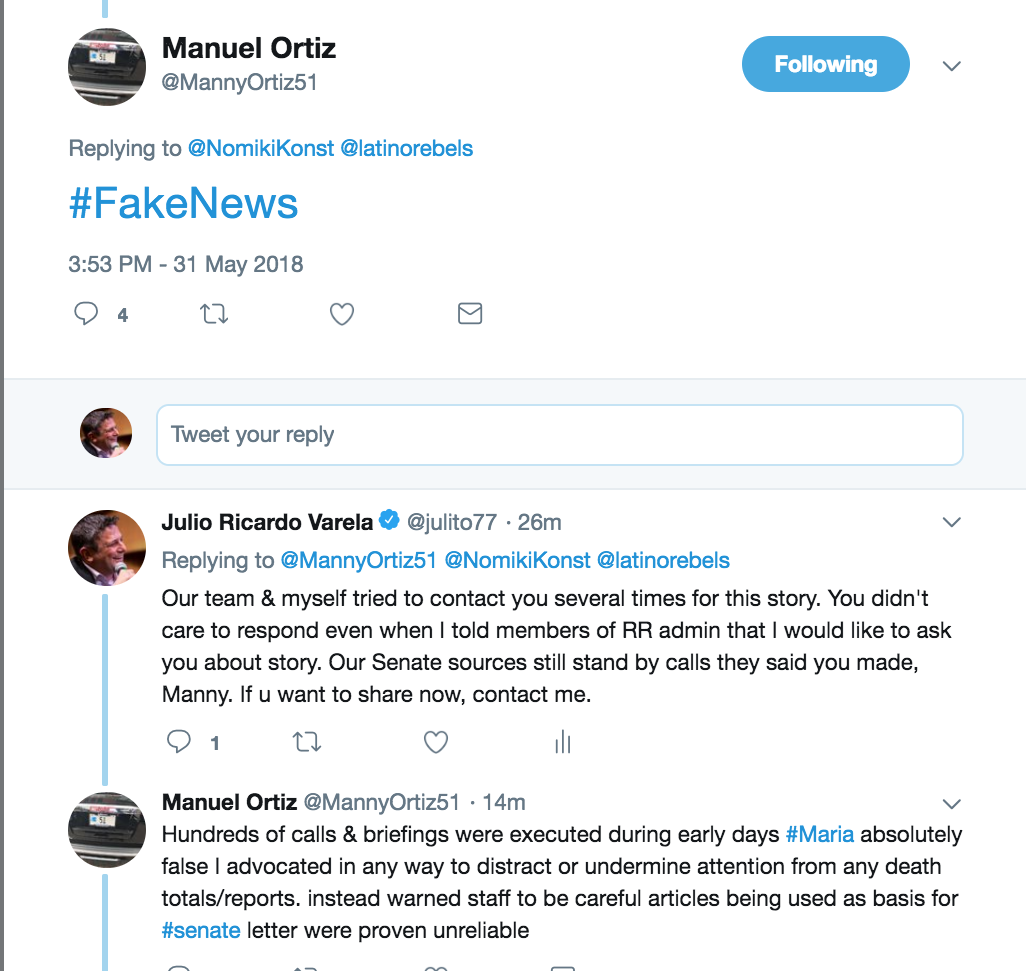 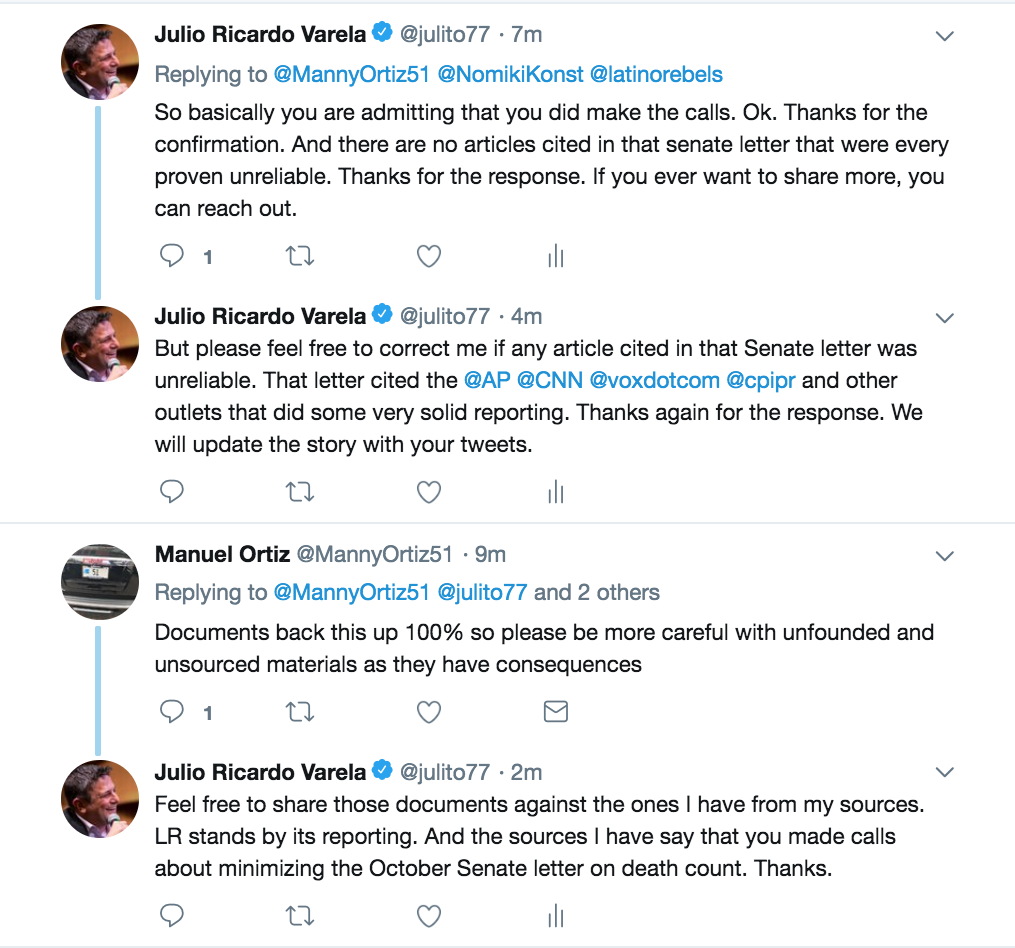 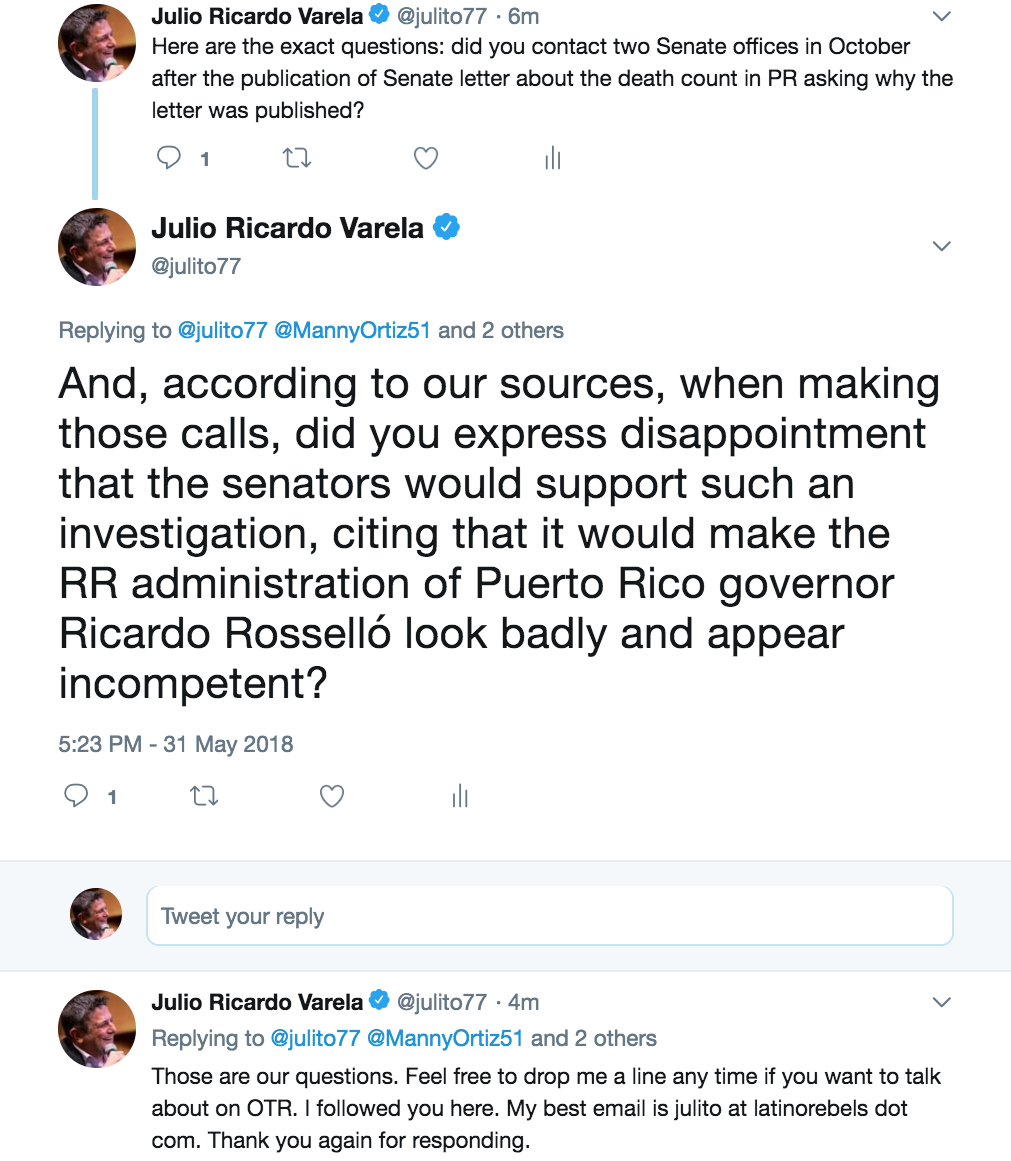 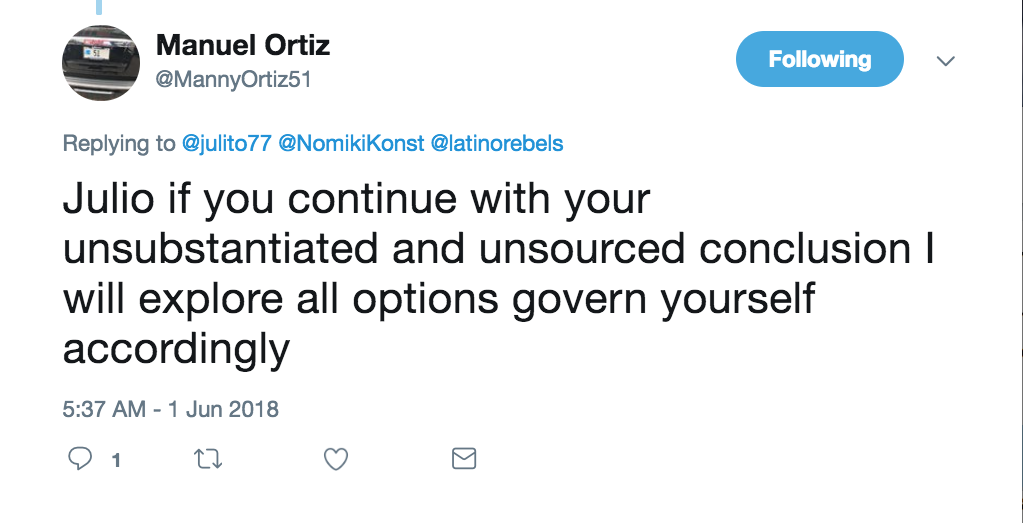 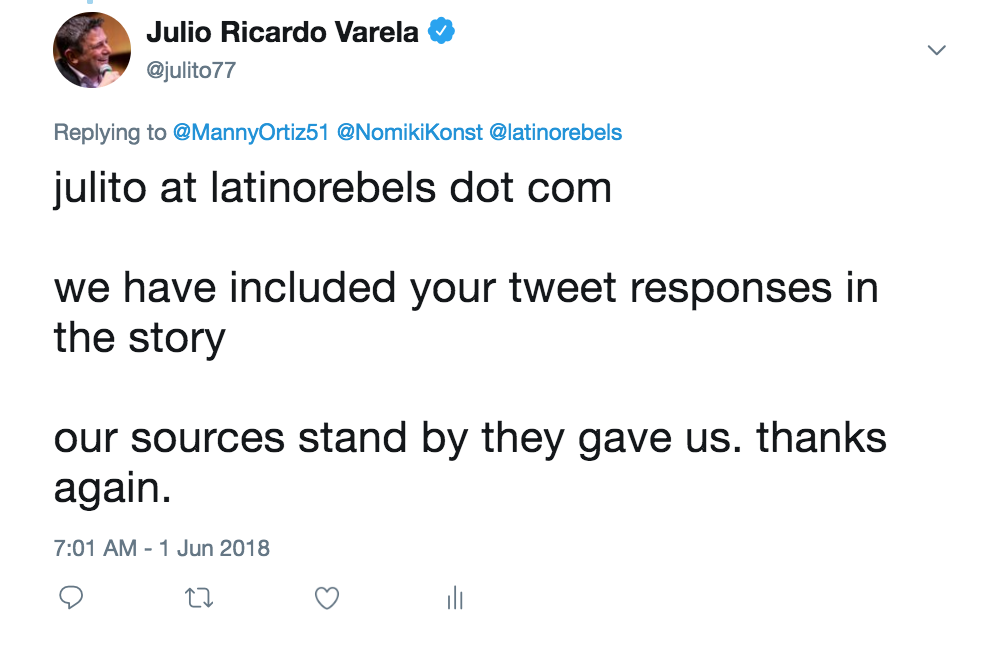 In case you are wondering, we stand by our reporting.

One response to “Sources: Democratic Lobbyist With Ties to Puerto Rico Gov’t Urged Senators to Not Focus on María Death Count”