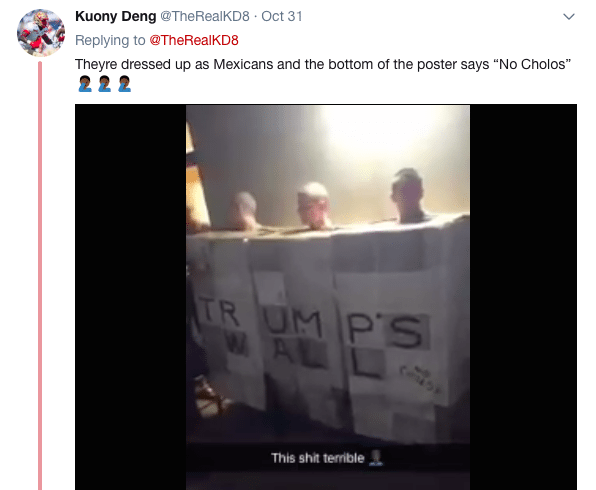 UPDATE: At 3 p.m. ET, Colonel Stewart D. MacInnis of the Virginia Militia and Virginia Military Institute’s Director of Office of Communications and Marketing sent us the following statement. Col. MacInnis also told Latino Rebels that they will not say if the students who did the costume were disciplined.

During the Halloween festivities this past week, a costume portraying “Trump’s Wall” with an inscribed derogatory term was in poor taste and demonstrated a lack of appreciation that it was offensive. This matter raises the issue of civility in both the initial presentation of the costume and in the reaction and counter reaction it has engendered. This lack of civility is inappropriate and does not represent the values of the Institute. As members of the VMI community, we should and will hold ourselves to a higher standard. The VMI leadership does not tolerate this type of behavior and is addressing the matter with the Corps of Cadets.

So disappointed man, this is an embarrassment. These guys won best costume at our schools Halloween Celebration here at VMI. #Thread pic.twitter.com/Jg4xi8F7ay

Theyre dressed up as Mexicans and the bottom of the poster says “No Cholos” ??‍♂️??‍♂️??‍♂️ pic.twitter.com/w1LXneyKfw

We asked Deng if VMI’s administration was contacted about this. He said yes.

So on Thursday morning, we contacted the office of VMI’s Superintendent, retired U.S. Army General J.H. Binford Peay III, for comment about the costume and whether VMI was aware of the videos. As of this posting, the Superintendent’s office told us that our request for comment has been forwarded to VMI’s communications team.

Meanwhile, in case you are wondering, this is VMI’s Statement on Diversity:

The Superintendent’s Statement on Diversity at Virginia Military Institute

We must count the diverse nature of the Corps of Cadets among VMI’s chief virtues. Our time-honored mission is to produce educated, honorable men and women who will serve the nation and their communities as leaders in their personal and professional lives. Perhaps more today than ever before in our nation’s history, the capacity to understand, accept, and motivate people of diverse backgrounds and cultures is integral to successful leadership.

The VMI regimen is demanding and intensive, designed to instill both the spirit and the skills of teamwork. Living, learning, and working together—unified as one Corps—some of America’s finest sons and daughters learn to set self-interest aside for a common good. Many from other countries of the world join us, too, because they seek the values inherent in the VMI experience. Regardless of their backgrounds, no matter their homes or pasts, all of our cadets begin their four-year journey here on common footing. Wearing the same uniforms, they grow together, learning to rely upon each other, their Brother Rats, as they pass together through a crucible that will literally change their lives both collectively and individually.

Race, national origin, gender, social class—none of these sets a cadet apart at VMI. Here, differences blend to enrich our perspective on the world that VMI’s citizen-soldiers will enter following graduation. Let there be no doubt that One Corps comprises Virginia Military Institute, and that our cadets are strengthened by cooperative efforts to sort through differences in search of commonalities.

As for Deng? He’s posting screen grabs of how some think he shouldn’t have posted the video:

@DazminePalmer_ Said it best, the true colors starting to show around here ? pic.twitter.com/MBzWM6hHGs