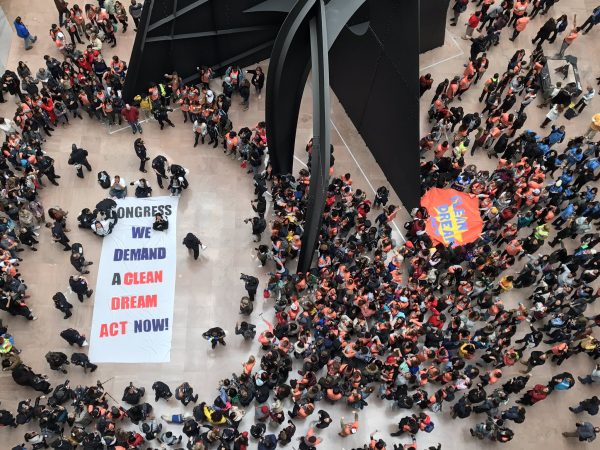 Supporters of a DREAM Act demonstrating on November 9, 2017 at the Hart Senate Office Building in Washington, D.C. (Photo via United We Dream)

With livestreams happening on social media, scores of immigrant youth and their allies demonstrated on Thursday to convince Congress that it must pass a clean DREAM Act before the protections for Deferred Action for Childhood Arrivals (DACA) recipients end early next year.

According to an email from United We Dream, a key organizer in the #DREAMActNow actions, “Immigrant youth just shut down the Hart congressional building to call for a clean Dream Act. Hundreds of activists packed the building and 15 brave freedom fighters were arrested a few minutes ago for holding their ground and refusing to be silenced. They put their bodies on the line to demand protection for millions of immigrant youth, while thousands more took the streets today in cities from coast to coast to also demand Congress pass a clean Dream Act by December.”

Students @PhoenixUnionHS getting ready to walk out in solidarity with #DREAMers across the country #DREAMActNOW pic.twitter.com/9M5rzYerSo

The #DreamActNow hashtag also shows several videos and photos of the Thursday actions.

Senators are also tweeting their support:

#Dreamers, I stand with you. It’s time for Congress to pass the #DREAMAct. Let’s empower young people who are making major contributions to their communities. #DREAMActNow pic.twitter.com/C3tPeL17Ms

Approximately 800,000 Dreamers know no other home than the United States. We must bring the Dream Act up for a vote. #DreamActNow

Thousands of people are rallying on Capitol Hill today to demand that Congress take action to protect dreamers.

To the hundreds of Dreamers I saw on my way to the Senate floor, I am proud to stand with you! We need a clean #DreamActNow pic.twitter.com/93MTeU9rcH

According to another #DreamActNow email, “Congress must vote on a year-end spending bill by December 9th, which will include funding for immigration enforcement. With the repeal of DACA, if protections for Dreamers are not passed this year, those funds WILL be used to deport Dreamers who will lose protection from deportation starting on March 5th.”

One of the DREAMers arrested in DC Thursday was Belén Sisa, who shared the following message and image earlier: 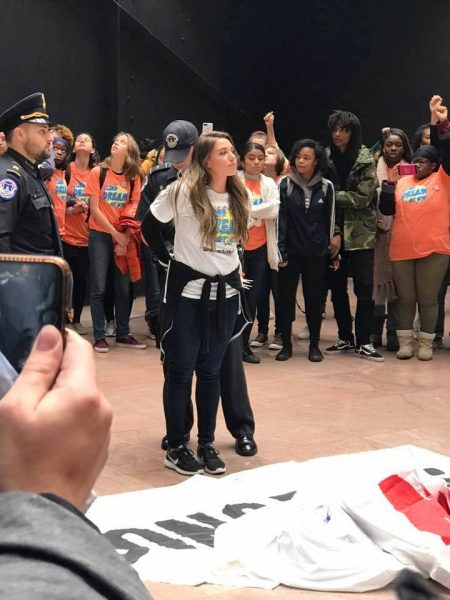 Dear Friends and Movement Family,
If you are reading this, I have been arrested and am in jail for standing up to Congress and the Trump administration in Washington, D.C. demanding that they pass a Clean Dream Act Now before the end of this year.

I participated in this action because my heart led me to commit myself to put everything on the line for something much bigger than myself. Two months ago the Trump administration took away DACA, something we knew would happen, but it opened many old wounds. I could not help but think back to every struggle my family endured for us and for me to be who I am. We cannot and will not go back. As immigrant youth we know the power we hold and we will no longer settle for anything less than permanent protection, respect and dignity, for ourselves, our parents and our communities.

I am willing to put my livelihood and ability to stay in this country at risk, because as a person with DACA it was crucial for me to speak out for justice for all undocumented people. Because I am tired of being used as your political pawn for a white supremacist agenda, and I demand to be seen for my humanity not just what I have to offer you.

I did this for every undocumented person who feels voiceless, for every family that is scared for their children who had DACA, for those who’s future is in the midst of uncertainty counting down to March 5th when work permits will begin to expire and need action. I am doing this because we need change in our immigration system and we will no longer be ignored. We are not victims, we are warriors.

Now more than ever I need you to be in this fight with me. Call your Senators, call your Representatives, and demand a Clean Dream Act Now! Do it for the thousands of undocumented youth who don’t know what is going to happen to them in the next few months.

Send me your love and your rage.