Editor’s Note: The office of Rep. Luis Gutiérrez (D-IL) released the following to the media on Friday. We are sharing the entire release as is because it provides a real look into with life with Deferred Action for Childhood Arrivals (DACA) is like these days. 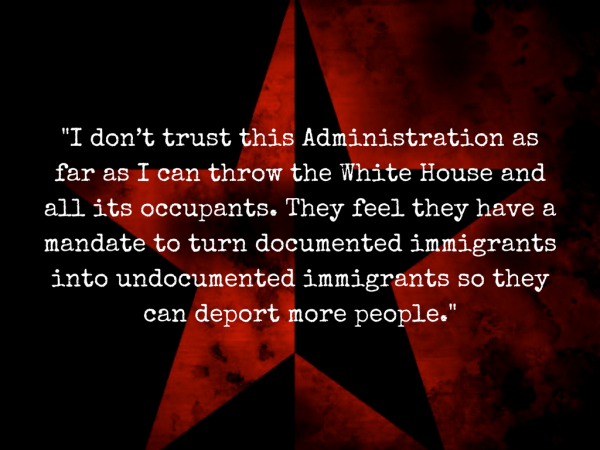 Chicago – Rep Luis V. Gutiérrez (D-IL) has learned of at least 21 cases in Chicago where applicants to renew DACA have been denied because USCIS says they did not accept the applications before the October 5, 2017 deadline.  When the DACA (Deferred Action for Childhood Arrivals) program was killed by President Trump in September, a window for renewal applications was opened for some DACA recipients whose DACA status expired before March 5 of next year.  However, USCIS (U.S. Citizenship and Immigration Services, the branch of Homeland Security that processes applications for immigrants) said the applications had to be “accepted” by October 5 of this year.

But applications mailed to USCIS as early as September 13 were not received or “accepted” for processing, even though they were mailed from addresses in Chicago to the USCIS lockbox address also in Chicago.

In one case, an application mailed to the Chicago lockbox address on September 13 via registered mail was delivered, according to the Post Office receipt, onOctober 5, but USCIS says it did not receive it until the next day, thereby making the application invalid.

In another case, an application was mailed on September 21, which the Post Office estimated would be received by September 29.  The actual receipt, according to USCIS, was October 9.

Cases came directly to Rep. Gutiérrez’s office and through local advocacy groups that helped DACA applicants before the deadline, including the Instituto for Progreso Latino and the Logan Square Neighborhood Association.  It is not clear if the U.S. Postal Service is to blame or USCIS, but that doesn’t matter to Congressman Gutiérrez.

The following is a statement from Rep. Luis V. Gutiérrez a Member of the House Judiciary Committee and the Chair of the Immigration Task Force of the Congressional Hispanic Caucus.

I don’t care if it was incompetence by one federal agency or the other, the DACA applicants did everything right and they are still getting rejection notices and their whole lives in this country and the hopes and dreams of their families are at stake.  I am sure there are many other cases like this across the country, but for the 21 cases that have come to my office so far, because somebody else did not do their job correctly we are taking innocent young immigrants and making them deportable. That is unacceptable.

I don’t trust this Administration as far as I can throw the White House and all its occupants. They feel they have a mandate to turn documented immigrants into undocumented immigrants so they can deport more people.  Killing the DACA program and ending TPS (Temporary Protected Status) are examples of how they are trying to increase the ranks of deportable people.  And in the case of DACA, there is no appeals process or accountability for USCIS or Homeland Security.  So these young people who played by the rules have no recourse.

You cannot trust Donald Trump to keep his word and you cannot appeal to his sense of decency because it doesn’t exist.  The fact is we have dozens of people who did everything right and are still getting nothing, And estimates are that another 22,000 eligible DACA recipients did not beat the application deadline, which means people are already losing their DACA status well before the March 5, 2018 cutoff.