A Letter From Siham Byah, a Single Mom Being Detained by ICE

The following letter by Siham Byah was posted Wednesday at the Free Siham Facebook page:

I am writing these lines from the Bristol County Jail, where I was brought upon my unjust, unwarranted, and uncalled for ambush-style arrest on Tuesday November 7th at the ICE headquarters where I was asked to come in prior to my original check-in date because “they now require people to check-in twice a year.” I have since been detained under inhumane conditions, and my son’s life has turned upside down. He has been forcibly removed from the comfort of his home with a police escort and taken to some complete stranger’s home, totally disregarding my repeated requests to have him placed with the designated people I had picked to care for him! 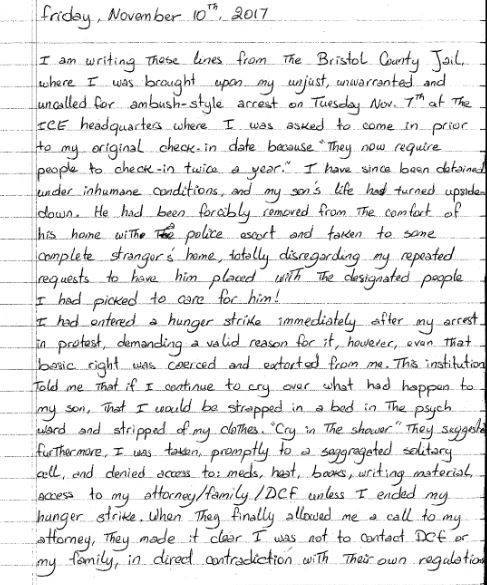 I had entered a hunger strike immediately after my arrest in protest, demanding a valid reason for it. However, even that basic right was coerced and extorted from me. This institution told me that if I continue to cry over what had happened to my son, that I would be strapped to a bed in the psych ward and stripped of my clothes. “Cry in the shower,” they suggested. Furthermore, I was taken promptly to a segregated solitary cell, and denied access to: meds, heat, books, writing material, access to my attorney/family/DCF [Massachusetts Department of Children and Families] unless I ended my hunger strike. When they finally allowed me a call to my attorney, they made it clear I was not to contact DCF or my family, in direct contradiction with their own regulations outlined in the handbook they handed me when I first got here. Faced with this cruel and unusual emotional blackmail, I was forced to take two bites out of my food tray so I could find out, at the very least, where my son is! 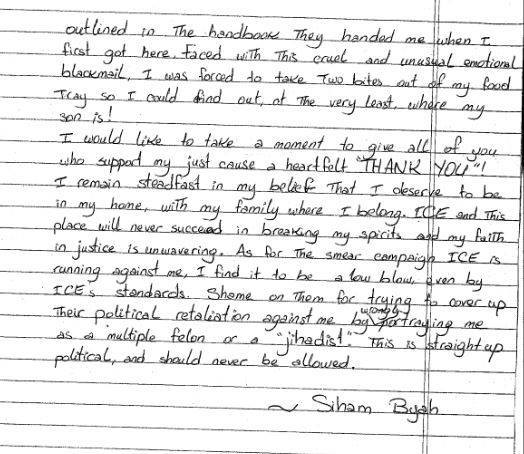 I would like to take a moment to give all of you who support my just cause a heartfelt “THANK YOU”! I remain steadfast in my belief that I deserve to be in my home, with my family where I belong. ICE and this place will never succeed in breaking my spirits and my faith in justice is unwavering. As for the smear campaign ICE is running against me, I find it to be a low blow, even by ICE’s standards. Shame on them for trying to cover up their political retaliation against me by wrongly portraying me as a multiple felon or a “jihadist.” This is straight up political, and should never be allowed.

This update was posted on the page on November 21:

Hi all,
I would like to inform you all that ICE attempted to deport Siham Tinhinan Byah today. They planned to take her to New York airport and ship her to Morocco. Siham stated that she refused to go, and the ICE officer did not wanna force her as they normally do. She was then taken back to Bristol jail county. Siham has been through hell, no sleep and the last meal she had was in Sunday morning. This is very sad and upsetting. Please keep up your support to free her and reunite her with Naseem. In solidarity we stand with Siham.
#FreeSiham

AJ+ also did a video update the same day:

A single mother and her child are torn apart – thanks to ICE. pic.twitter.com/mbrDyVuhSg