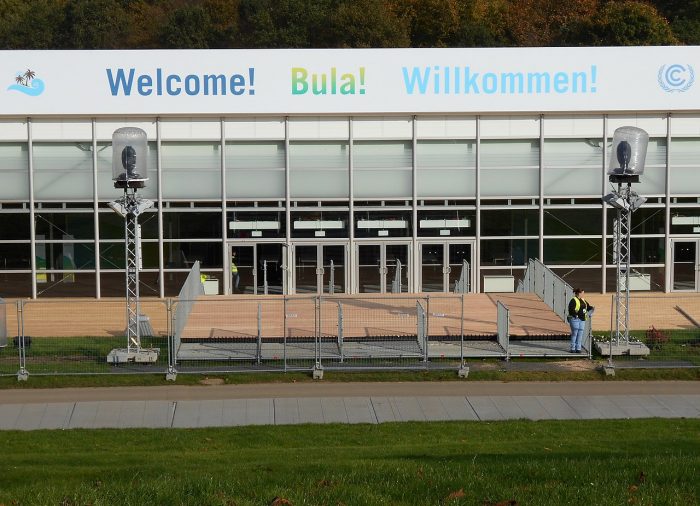 Entrance of the so-called “Bonn-zone” at the Rheinaue park in Bonn, where events, exhibitions and presentation of the countries and UN organizations took place during COP 23. (Photo by Spielvogel/ Creative Commons Attribution-Share Alike 4.0 International)

Latin American countries, regions and cities demonstrated clear ambition and leadership at the United Nations Climate Change Conference (COP23) held in Bonn, Germany over the past two weeks. Their progress appeared in the form of national commitments, participation in global coalitions, subnational action plans, and international awards. With every year, Latin America increasingly appears as a regional leader in efforts to halt and adapt to the warming planet. Several specific countries are playing leading roles and standing out for their work among other developing nations around the world.

Here are just a few highlights from this year’s COP:

Mexico and Costa Rica joined 23 other countries in signing on to a new global coalition committed to phasing out coal and supporting clean power policies and investments, while restricting financing for coal plants. Launched by Canada and the UK, the Powering Past Coal alliance hopes to expand its membership from 25 to 50 countries by next year’s COP. The coalition’s members will share experiences, lessons learned and best practices on diverse strategies to phase out coal.

Buenos Aires, Caracas, Mexico City, Quito, Rio de Janeiro, and Santiago de Chile were among 25 global cities that committed to develop and implement more ambitious climate action plans before 2020. These cities –members of the C40—aim to use these plans to meet their emissions reductions goals and build more climate resilient cities. The results of these actions are expected to bring social, economic and environmental benefits to the nearly 150 million citizens who live in the 25 participating cities.

2. Latin American efforts awarded for being innovative and forward-thinking.

Young scientists from the International Center for Tropical Agriculture (CIAT) in Colombia won the Momentum for Change award at COP23, for their innovative use of information technology and communications to create new ideas. The scientists analyzed meteorological data to understand how climate variation was affecting rice agriculture in the country. Realizing that a drought was imminent, they recommended that 170 local rice producers change their sowing season, thereby helping them avoid US$3.6 million dollars in economic losses.

One Ecuadorian initiative, Sustainable Agriculture with Inclusion and Participation of Gender received the Impulse for Change award, granted by the UN to exemplary solutions for climate change in the world. The project supports families in the Metropolitan Area of Quito to give them access to 2,500 new urban gardens, creating 110 agricultural microenterprises, educating about climate change and prioritizing the presence of women as leaders (85.7 percent out of the 56,000 participants).

3. Countries highlighted the importance of addressing gender in climate action.

Following on a similar note as the previous summary, Costa Rica celebrated the approval of a Gender Action Plan, which the Foreign Ministry hailed as “a triumph for all women and girls on the planet.” As the coordinator and spokesperson on behalf of the Independent Alliance of Latin America and the Caribbean (AILAC), Costa Rica sought to empower women and girls to achieve gender parity in representation within the Convention’s negotiation process, as well as providing an adequate means of implementing mandates of the more than 60 resolutions that address the issue of gender.

Indigenous women were recognized at COP23 on Gender Day for their demands to stop illegal land titling that exacerbates the risks and disasters resulting from climate change. Sonia Guajajara of Brazil criticized Amazonian governments’ extractivist economic model that prioritizes soy monocrops and mining, which become greenwashed as sustainable despite the major threat of deforestation. Ruth Flores, an Aymara leader from Puno, Perustated, “We women are the ones who collect the seeds. We are the guardians of the hills and the water. And now we are the ones that face climate change.”

4. National governments stand by -and increase- their climate commitments.

Argentina proposed an increased unconditional goal of reducing emissions 18 percent by 2030, with a potential of reducing an additional 19 percent conditional upon international funding and technical assistance. The country plans to focus on improving energy efficiency and renewable energy generation, the conservation and restoration of forests, and transportation solutions to reach those goals.

The Dominican Republic submitted its Third National Communication on Climate Change to  the United Nations. Officials from the National Council for Climate Change and Clean Development Mechanism and the Ministry of Environment and Natural Resources delivered the document to Patricia Espinosa, Executive Secretary of the UN’s Framework Convention on Climate Change, and underscored some of the actions that the Caribbean country is already taking to combat and adapt to climate change.

5. Sub-national governments in the region took the spotlight.

The Argentine province of Santa Fe presented its climate change priorities at an event for sub-national COP participants. In his remarks, the Provincial Undersecretary for Renewable Energy, Maximiliano Neri, highlighted the connections between climate-inducing pollution and human health. Santa Fe’s representatives also proposed bringing the rest of Argentina’s provinces into the Under2 Coalition, a forum of 205 states, regions and provinces representing almost 40 percent of the world’s economy who are working together on climate.

Another member of the Under2 Coalition, the Mexican state of Yucatán, shared its experiences working to fight climate change at the subnational event in Bonn. In particular, the state has focused on coastal recovery, encouraging biodigesters in the swine industry, reducing carbon emissions in the public sector, and restoring wetlands to improve “blue carbon” reserves.

It is no surprise that the region is taking a leadership role in global climate conversations, as Latin American countries are among some of the most vulnerable to climate impacts and most are already feeling the pains of the warming planet. Catastrophic droughts, floods and storms hit many countries hard, in 2017 costing untold dollars and, tragically, human lives.