EDITOR’S NOTE: As one of the first Latino media sites that actively pushed for Net Neutrality, we are sharing the news of a new campaign for 2018, organized by Fight for the Future. Here is what they shared on Wednesday: 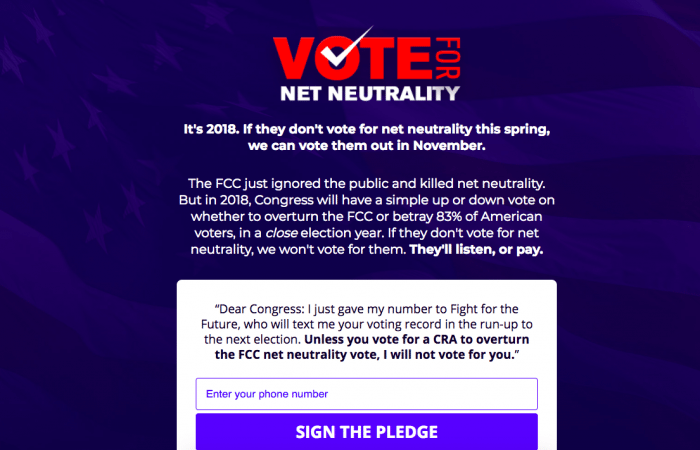 Internet activists are kicking off 2018 with a bang by launching VoteForNetNeutrality.com, a no holds barred campaign calling on Internet users to vote en masse against lawmakers who refuse to overturn the FCC’s deeply corrupt repeal of net neutrality protections, using the Congressional Review Act (CRA). 29 Senators have already committed to support a CRA vote.

Congress has the power to overturn the FCC with a simple majority vote in both houses using the CRA, which can be forced to a vote even without support from leadership. The vast majority of American voters (including 3 out of 4 Republicans) opposed the recent FCC move, taken just as lawmakers head into a close election year. Due to CRA rules, it is virtually guaranteed that every member of Congress will have to go on the record as either for or against.

The campaign page displays a scoreboard showing which lawmakers have already signed on to vote for the CRA to overturn the FCC order, and which ones have not. Once a voter signs the pledge, they’ll receive a text message on the eve of the next election with their local lawmakers’ net neutrality voting record, with a reminder to not vote for anyone who didn’t support net neutrality in the CRA vote.

The fight for digital rights has matured into an election year issue. Millions of people from across the political spectrum who called on the FCC and Congress to keep the rules and were ignored will be taking their anger to the polls in 2018.

Evan Greer, campaign director of Fight for the Future, said: “The public has spoken and voters are demanding that their lawmakers do their jobs and defend net neutrality. Any lawmaker that ignores the overwhelming consensus among tech experts and this level of public outcry doesn’t deserve to be in office. News outlets keep asking whether net neutrality will be an election issue in 2018. We are going to make it one.”

The pledge on the page could not be more clear. It reads, “Dear Congress: Unless you vote for a CRA to overturn the FCC net neutrality vote, I will not vote for you. I have given my phone number to Fight for the Future, who will text me your voting record on the eve of your next election.”

“Lobbyists are foaming at the mouth at the chance to ram through bad legislation that permanently undermines net neutrality.” added Tiffiniy Cheng, co-founder of Fight for the Future. “The FCC just slashed 22 years of net neutrality rules and precedent even though they’re at the heart of what makes the Internet work, and are overwhelmingly popular with voters from across the political spectrum. The Congressional Review Act exists for a reason––for Congress to overturn undemocratic changes at federal agencies. Congress has a moral imperative to use their CRA powers to overturn the FCC’s rogue action to end the basic principle of the open Internet and are supported by the majority of the public. Whoever doesn’t will pay at the polls.”