UPDATE, February 1, 2018: LULAC has responded to the Rocha letter.

Right around the State of the Union was happening Tuesday night, a letter from League of United Latin American Citizens (LULAC) president Roger C. Rocha Jr. that essentially agrees with President Trump’s immigration framework has several LULAC members and other Latinos up in arms.

Here is what Rocha’s letter said: 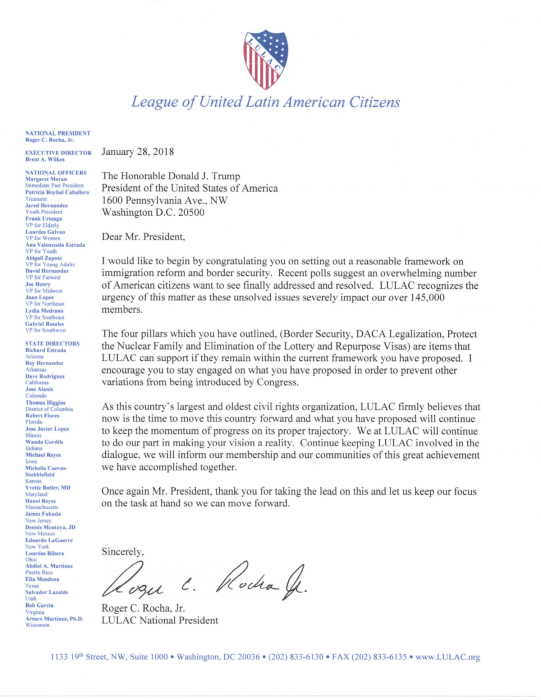 According to TPM, nobody at LULAC knew about the letter. As LULAC policy manager Juan Perez told TPM, “Literally nobody on staff knew about it. He sent that letter on his own. None of the board members knew. We don’t even know whether the letter went straight to the White House or to Capitol Hill as well. We’re getting calls from so many Hill offices about it, and we’re just trying to figure out what’s going on and put out the fire.”

However, Latino Rebels has learned from several LULAC members across that Rocha did mention to some of his supporters that he would be drafting a letter to President Trump.

Response to the letter has been negative to say the least. Here are just some examples:

The following is a collective statement to the community from the LULAC Young Adult Membership:

The League of United Latin American Citizens Young Adult Membership is adamantly opposed to Securing America’s Future Act (HR 4760), RAISE Act (S. 354), and the latest proposal by the Trump Administration – each proposals meant to severely curtail America’s immigration system, or to dismantle the immigration system while at the same time bartering the safety and protection of Dreamers at the expense of same for their families. The rejection of these proposals come from our unwavering commitment to the immigrant community and support for the millions of Dreamers residing in the United States. LULAC’s Young Adults seek a better path forward on these negotiations.

The White House Proposal is an awful attempt at a compromise deal: one that attempts to severely limit immigration and instill fear in current immigrants through increased domestic enforcement in this country. This proposal offers a pathway to citizenship for 1.8 million Dreamers, but at the same time creates steep qualifications to limit the community’s access to this benefit. At the same time, the proposal hopes to gutt the legal immigration system by ending 5 of 7 family reunification categories and ending the diversity visa program. It hopes to increase the number of ICE and Border Patrol Agents while increasing the detention of immigrants in what will likely be the private prison system. All this, while also demanding an additional $25 billion from American taxpayers for a trust fund to help build the southern border the wall – a plan criticized by many experts as ineffective at stemming drug trafficking at the border, and a waste of taxpayer dollars.

The Dream Act of 2017 (S.1615) is the ideal legislation that we as the emerging leadership of our organization stand by. It brings a solution to the Dreamer Crisis without added border protections. This bill would grant current DACA beneficiaries a 8-13 year pathway to citizenship, allow TPS beneficiaries to apply for LPR status, stop of removal proceedings, and change in-state tuition and financial aid access in numerous states. This allows for a two-part immigration solution: a compassionate solution for 1.8 million Dreamers, and further talks on the legalization for 9 million undocumented Americans.

LULAC is clear in its civil rights mission, and in its stance on this issue. As always, the organization and its membership stand for the protections of our young people, their families, and their community members who would not be able to fix their status through the RAISE Act, the Secure Act, nor the White House proposal. More importantly, the LULAC Young Adults would not, under any circumstance, eschew our principles in support of the immigrant community and in support of civil liberties by supporting any agreement that would lead to enlarge and embolden immigration authorities to terrorize immigrants in their communities. The recent ICE raids outside of churches, schools, and places of work are an affront to human decency, and while it may create the illusions of security for some, they serves as a harrowing sign of what’s to come. To increase terror amongst immigrants in exchange for a limited pathway to citizenship for some is no agreement we can live with.

LULAC’s role as a nonpartisan Latino civil rights organization is to advocate for our community in good faith, and represent the interests of all those who encompass it. In that spirit, we reject the current proposal from President Trump, and seek a new path forward that has bipartisan agreement on policies that act in good faith and good will towards Dreamers and their families

A petition by Mijente is also making the rounds:

Sometimes the most helpful thing an organization can do is cease to exist. In this case, LULAC should just go away.

Why is this important?
Roger C Rocha Jr., the President of LULAC just wrote a letter congratulating white supremacist Trump for “setting out a reasonable framework on immigration reform and border security.”

LULAC has proven their time is up and it’s time to go.

Sign this petition and demand that LULAC stop aligning with white supremacy, attempting to speak for our people, and keep their respectability-vendido-outdated selves out of issues and those of the people they have never represented.

A few people have tweeted out #FueraRocha, calling for him to resign as LULAC president.

As a member of #Lulac308 and #LULACIowa, I am ashamed and angry at the betrayal from national #LULAC. It is not enough to be angry, We deserve better national leadership. For our chapters, I say either he goes or we do!! @LulacIowa @lulac308 #FueraRocha

The President of #LULAC fell for Trump’s divide and conquer tactic, praising a President who gave a xenophobic and hateful speech. He also called LULAC the “largest and oldest civil rights organization in the country”. Apparently he was too lazy to Google “NAACP” #FueraRocha

I’m proud of LULAC and it’s work. But Rocha is NOT MY PRESIDENT! #fuerarocha

Latino Rebels has reached out to LULAC for comment. LULAC has told us that it is preparing a formal statement about the letter, and the organization will share it once it is available. We will add it to the end of this post once it is out. (UPDATE: LULAC HAS RESPONDED.)

UPDATE: NBC News reported that Rocha is retracting the letter.

Roger Rocha Jr., president of LULAC, told NBC News the retraction would be issued Wednesday afternoon, although the group’s executive director said it would be Thursday. Meanwhile, the group’s board was to meet in coming days to discuss the letter Rocha sent that contradicted the group’s official stand on Trump’s four-prong immigration framework.

“It will be retracted, the letter I sent out,” Rocha said.