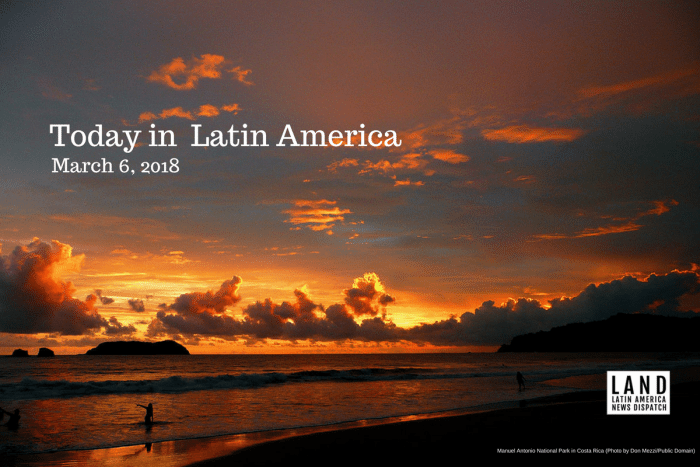 Twenty-four Latin American and Caribbean states signed on Sunday the first legally-binding pact in the region to protect environmental activists, in an event hosted in San José, Costa Rica, by the U.N.’s Economic Commission for Latin America and the Caribbean. Costa Rican President Luis Guillermo Solís labelled the pact as “crucial for the very survival of our species.” The treaty requires states to investigate and prosecute attacks and killings of nature defenders, and it protects the rights of access to information and public participation in environmental matters.

The treaty comes two years after environmentalist Berta Cáceres was killed in Honduras, one of 14 such deaths recorded in the country in 2016, ranking Honduras as one of the most dangerous countries in the world for nature defenders. Cáceres was fighting to stop the construction of a hydroelectric dam on the Gualcarque River, ancestral territory of the Lenca indigenous community. The pact also comes two days after the arrest of dam executive David Castillo Mejía on charges that he is the intellectual author behind the death of the celebrated environmental and indigenous rights activist.

Mexican intellectuals addressed a letter to President Enrique Peña Nieto asking that he stop what is being perceived as a politicized investigation of Ricardo Anaya, the second-runner in the July 1 presidential race. The signatories—that include former government officials such as Jorge Castañeda or Arturo Sarukhán, and political scientists such as José Woldenberg, Enrique Krauze or Denise Dresser—denounced the use of the Attorney General’s Office to persecute an opposition leader.

U.S. President Trump said yesterday that if Mexico and Canada agreed to new terms on the North American Free Trade Agreement, known as NAFTA, he would rethink tariffs on aluminum and steel. Earlier in the day, he complained on Twitter about the “large trade deficits with Mexico and Canada” and said NAFTA—which is currently being renegotiated—had been “a bad deal” for the United States.

For the second year in a row, the number of monarch butterflies that migrate from the United States and Canada to winter in Mexican forests decreased to 6.12 acres, in a disparaging tendency that has remained constant since the late nineties, when they covered 44 acres of forest, an official study revealed yesterday. Potential factors behind this decline are the busy hurricane season and the increased use of herbicides across the butterflies migration route, as well as a cold snap and wind storm in the reserve in Mexico.

Cuba will send 100 workers, including engineers, to help with the reconstruction of the hurricane-battered island of Dominica. Hurricane Maria caused devastation through the island located in the Lesser Antilles, killing 30 people and damaging 95 percent of the buildings. Dominican Prime Minister Roosevelt Skerrit said that his administration is currently “finalizing an agreement with the government of Cuba” in order to increase reconstruction efforts.

After a 12-day standoff, armed police and a judicial official evicted Trump Organization staff from Panama City hotel and stripped the now-U.S. president’s brand from the building’s façade. Majority-owner Orestes Fintiklis celebrated his victory by playing “Accordeon” on the piano, a traditional anti-fascist Greek song. This latest development means that Trump has effectively surrendered physical control of the only Trump-brand hotel in Latin America.

Following Guatemalan President Jimmy Morales’ remarks last Sunday, a Guatemalan diplomat toured Jerusalem scouting for potential locations for the new embassy before its May 16 move. Ambassador Sara Castañeda was seen at a real estate office in west Jerusalem, close to the U.S. and Guatemalan consulate, Reuters reported. A member of the Palestine Liberation Organization (PLO)condemned the move as an “illegal strategy” that seeks to “undermine peace.”

The armored SUV of Colombian presidential frontrunner Gustavo Petro was attacked on Friday.

There is disagreement on whether the bulletproof glass was cracked by gunshots or rocks: while Petro said immediately after the fact there had been no gunshots, yesterday independent experts said there were (swaying the candidate’s opinion) and the Attorney General’s Office said there weren’t. Petro, a demobilized leftist guerrilla, said yesterday that he suspected the “attempted assassination” was ordered by a local ex-mayor who is currently serving a prison sentence for murder and paramilitary collusion. The attack brings back memories of the presidential elections of 1990, when after the end of a peace process similar to the one that concluded last year, four presidential candidates of different parties were murdered along with thousands of militants of the left-wing party Unión Patriótica.

A team from the Pan-American Organization of Health arrived in Paraguay’s capital Asunción yesterday to verify whether the country has indeed become the first in South America to effectively eradicate malaria. The team collected documentation from Paraguayan officials and will spend the next eight days touring the country to evaluate the health system’s capacity to deal with potential outbreaks.

Brazilian authorities arrested yesterday the former CEO of the world’s largest poultry exporter on charges that he and other executives helped cover up the widespread bribery of food safety inspectors. Pedro de Andrade Faria was taken into custody in the southern city of Curitiba, along with former BRF SA Vice-President Hélio dos Santos Júnior, who resigned from the company last week. The bribery scandal, exposed last year through the sprawling “Car Wash” corruption probe, led the U.S., E.U., and China, among others, to temporarily ban Brazilian meat imports.