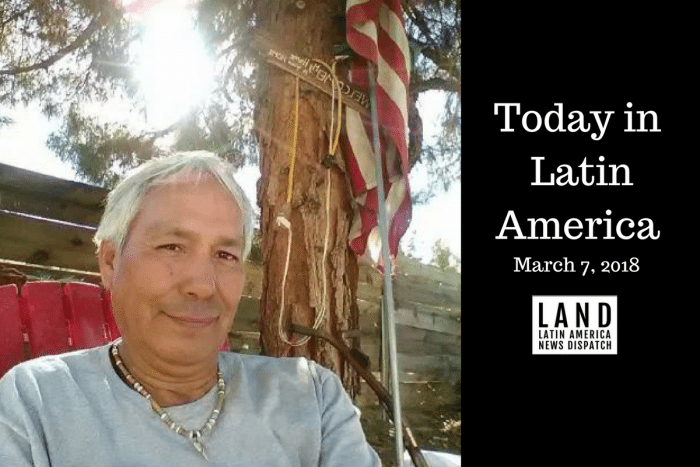 A 2017 photo of Emilio Gutiérrez Soto, courtesy of his lawyer.

Attorneys are demanding the release of Emilio Gutiérrez Soto, an award-winning Mexican journalist who is being held at an immigration facility in Texas after escaping death threats in his home state of Chihuahua, Mexico. Gutiérrez Soto fled to the United States and sought asylum with his son in June 2008, after learning that a military officer had ordered his killing due to his reporting on corruption in the Mexican military. Since then, he has fought for political asylum in the U.S., at times managing to obtain work permits and at times living on the verge of deportation. This past July 2017, Gutiérrez Soto was denied asylum request, triggering deportation proceedings for both him and his son.

Mexico is a notoriously dangerous country for journalists, and at least 89 Mexican journalists have been killed since 2000. Attorneys and activists claim that deportation will essentially be a deathsentence, and on Tuesday the Committee to Protect Journalism sent a letter to ICE officials urging for Gutierrez Soto’s parole.

In the midst of NAFTA renegotiations, Mexico’s Economy Minister Ildefonso Guajardo stated that the trade deal must remain trilateral. US Trade Representative Robert Lighthizer proposed making two separate bilateral trade deals with  Mexico and Canada citing a lack of time as a justification. Guajardo emphasized the conditions of integration between the three countries when rejecting this approach.

The president of Mexico’s National Commission on Human Rights(CNDH), Luis Raúl González Pérez, said on Tuesday that femicides, which are the killing of women because of their gender, are on the rise. Citing figures from the National Executive System of Public Safety, which showed a 72.49 percent increase of femicides since 2015, González stated that more measures, such as strengthening the public ministry and police forces, must be taken to tackle this problem.

Chilean airline Latin American Wings (LAW) announced it will temporarily suspend its flights between Haiti’s capital Port-au-Prince and Chile, following the mounting number of Haitians that travel to the South American country with a valid 90-day tourist visa but then do not return to the Caribbean island. Between 2016 and 2017 there was a 138 percent increase in the number of Haitians entering the country.

PBS NewsHour profiled a garment factory in El Salvador that hires ex-gang members, people with disabilities or high-school dropouts, and combines school and work to give these Salvadorans normally left in the fringes of society a chance at a brighter future.

Four months after the polarizing Honduran presidential elections, the European Union’s electoral observer mission urged the country to strengthen protection measures for threatened journalists and to end criminal charges for defamation and libel in a report released yesterday. Opposition candidate Salvador Nasralla has contested the results that gave the victory to second-term President Juan Orlando Hernández.

In regards to the upcoming Colombian parliamentary elections, the government issued an official decree to shut down the border with Venezuela from March 8 to 11 at 4pm. Amongst other stipulations, the decree also prohibits the consumption of alcoholic beverages and the civilian use of cellphones and cameras at polling stations. Colombian elections for Congress will be held on March 11, where 102 members for Senate and 166 members for the House of Representatives are to be elected by popular vote.

Bolivian ex-president Jaime Paz Zamora announced he would not join the party of former presidents and foreign ministers that are attending the upcoming court hearings for Bolivian maritime access at the International Court of Justice, which will commence at The Hague on March 19. Paz Zamora said that there will be no sea without a democracy that is respected and respectable, referring to current President Evo Morales’s bid for reelection and his supposed disregard for the popular referendum held in February 2016 which barred him from running again. Vice-president García Linera has accused Paz Zamora of betraying Bolivia, asserting that the country seeks both “the sea and democracy too.”

Brazilian Justice Luis Barroso ruled in favor of  lifting the bank secrecy of President Michel Temer in response to ongoing corruption investigations. Temer is suspected of receiving bribes from Rodrimar, the company that owns the largest port in Brazil and is comprised of many of Temer’s former advisors and friends. Temer is the first Brazilian president to have his bank secrecy lifted by the Supreme Court of Justice.