COMMENTARY: What It’s Like to ‘Run’ With Beto O’Rourke 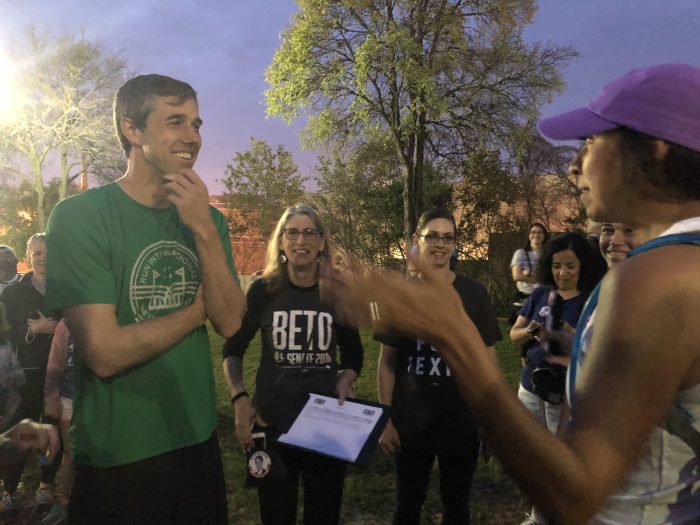 SAN ANTONIO, TEXAS — I woke up groggy to the sound of my alarm and let out a groan when I realized I had already lost an extra hour of sleep due to daylight savings. The time? 6:45 a.m. on a Sunday, a day when I usually enjoy sleeping in. But I mustered up the courage, put on some running shoes, and drove to the Flood Control Tunnel Inlet Park on East Josephine St. when it was still dark out. All of it just so I could run alongside a guy named Beto O’Rourke, a Democrat Congressman from El Paso who is challenging Republican Ted Cruz for the U.S. Senate.

And I wasn’t alone. Around 200 other San Antonians also decided that this was all worth it—just to get to know O’Rourke and hear him speak about his vision for Texas. As we all gathered in the dark at 7:30 a.m., a tall man with thin legs, ashy hair, and a green t-shirt walked up the path as everyone circled him amid camera flashes.

“Good morning; ready to run?” O’Rourke told a few children lined up to meet him. Applause filled the air, a kind of fervor you hear of when presidential candidates visit. Fueled by donuts, Twinkies, and cheap coffee, O’Rourke has been getting little sleep and traveling all across Texas to hold town halls that have drawn crowds in even some of the most conservative enclaves.

“Thank you for getting up this early, especially after losing an hour,” he told hundreds of experienced runners Sunday, who were joined by curious Texans on bikes, families pushing strollers with babies, and even dog owners who brought their pets to run alongside them. “It doesn’t matter if you’re a Republican, an independent, where you came from or who you love… we just care that you are here and we want to work together to do something better for this state.” 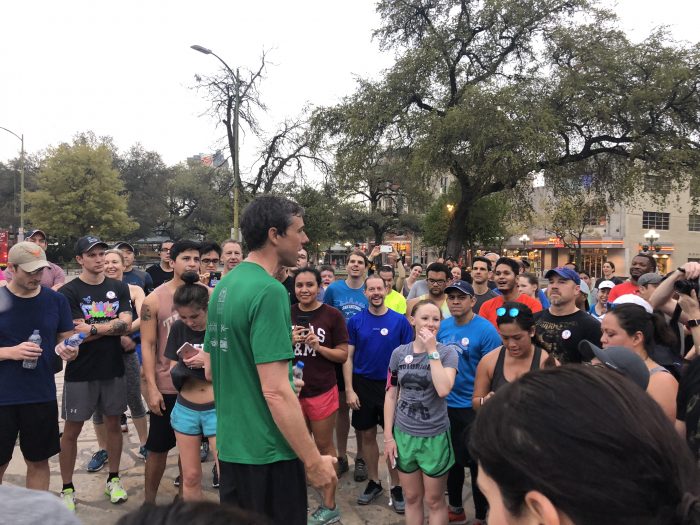 As we started the jog en masse and began to run toward the Alamo in downtown San Antonio, Beto moved about seamlessly, holding conversations with multiple people while we all funneled through the paths on the Museum Reach that line the River Walk. The pace was perfect to hold conversation with the eager voters who came to tell O’Rourke their concerns.

“We’re not running against anyone and we don’t even mention anyone else’s name,” O’Rourke said to one runner as beads of sweat dripped along his forehead. “We are running for the big ambitious, positive things.” Not once did he mention his opponent by name.

While O’Rourke claimed the Democratic primary over two opponents earlier this week, his margin was less than expected. For over two decades, Texans haven’t elected a Democrat to statewide office. He’s got a long race to run come the general election in November, but he’s definitely giving Cruz a run for his money. O’Rourke has visited more than 200 of Texas’ 254 counties and his impressive fundraising has shown he’s a relentless campaigner. Only time will tell if it’s enough to overcome a majority red state, but there’s no denying he’s amping up the conversation.

His nickname “Beto” is the Spanish-language nickname for Robert, and the way O’Rourke, 45, has chosen to best identify himself. His opponent, whose real name is actually Rafael but chooses to go by “Ted,” has accused him of pandering to Latinos even though O’Rourke has used the nickname since he was a child. O’Rourke is not Latino, but his family has lived in the El Paso area for four generations.

Mid-run, I decided to greet O’Rourke and test his foreign language skills. “Hola, Beto,” I said. “Buenos días,” he responded in almost perfect Spanish. “Gracias por estar aquí.” He sounded sincere and authentic, like someone who understood El Paso and its history. Beto has run binational 10K races that start from downtown El Paso, wind down through the community, and pass through bridges that take runners into to Ciudad Juárez, Mexico. Around three million people from these two border cities make up the largest binational community in the hemisphere, O’Rourke said. 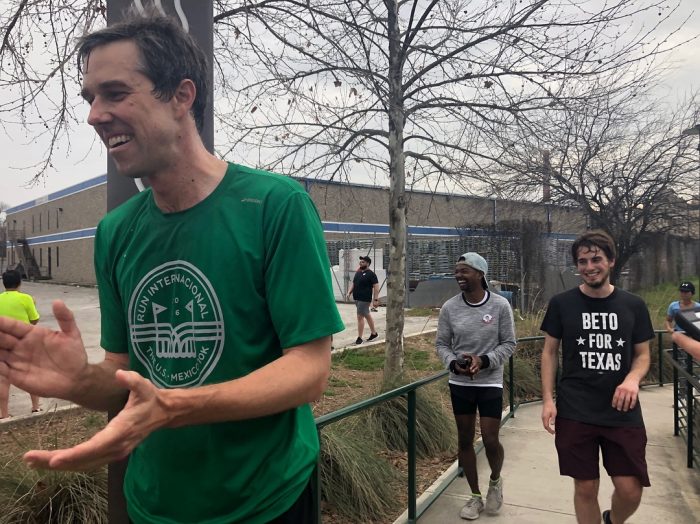 As breathless joggers finally made it to the pit stop at the Alamo, O’Rourke took questions during an impromptu town hall and made sure to highlight the importance of trade with Mexico and other countries. He mentioned the anger Americans feel toward China for “dumping steel below cost” in the U.S. but said we should fight the problem not by imposing taxes on other countries.

O’Rourke talked of boosting education funding and affordability and making health care more accessible for all citizens, but he also emphasized the importance of immigration reform and answered questions about gun control. He also high-fived a young girl and talked to her about Harry Potter books as they ran together.

“I think that Texas, given this terrific record of service, gun ownership, and gun safety, can be the state that leads the country in doing something sensible and sane like universal background checks,” O’Rourke told everyone at the Alamo. “We can save lives without taking away anyone’s constitutional rights while supporting the Second Amendment.”

He was answering a question from Raymond Torres, a local San Antonian who served in the military and claimed to be a staunch supporter of the Second Amendment. He said he came across O’Rourke on YouTube and decided to come on the run to hear him out. O’Rourke strongly argued that the AR-15, which he called “a weapon designed for war,” should not be on the market for citizens to buy at their leisure.

“I don’t know why Washington doesn’t think we can revamp the Second Amendment,” Torres told O’Rourke. “People keep losing their lives and it’s getting old. I back the Second Amendment, but responsibly, and we’re not doing anything. I’ve never been to one of these rallies but I believe in you.”

Stephen Ramirez drove all the way from San Marcos to meet O’Rourke in San Antonio. He said he never felt a personal touch from a candidate until he ran alongside O’Rourke and had an honest conversation with him.

“He’s absolutely an approachable person and I feel like he’s listening to everybody’s thoughts and his no PAC campaign really speaks volumes,” Ramirez said. “It’s not even about party. It’s becoming more about people as individuals and as Texans. It’s dissolving these party lines which have been so toxic.”

Nicole Chavez, who has lived in San Antonio for most of her life, said she felt motivated to contribute to O’Rourke’s campaign after she saw how humble and approachable he was with locals during the Sunday run.

“Ted Cruz would not be doing a morning run with people,” Chavez said at the conclusion of the run. “Beto is different and it’s a next generation thing. It’s all about the people —the collective— and it feels refreshing. We all need to be involved because it’s going be hard-fought. The most important things are at stake.” 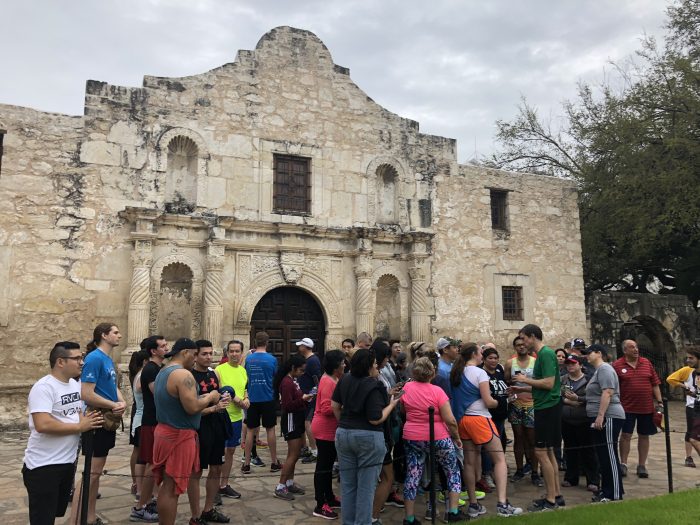 I’ve personally never been more excited to support a candidate in Texas. The fact that he can speak my native language is special. The fact that he gets social media and does Facebook live videos for most of his events so that we remain informed is exciting. As a millennial, the fact alone that O’Rourke is literally running with people across Texas motivates me to believe in something different. It makes me feel that there are politicians out there who will listen and talk to you on the side of the road and make you feel like you matter. Ted Cruz has got some catching up to do, because right now O’Rourke is leading the race in my book by listening to the common person who shows up for a Sunday run.

“I have no hope of being able to represent you and serve you, whether it’s jobs or affordability of education or being able to see a doctor or leading the way on immigration, if I have not shown up and listened to you and heard you,” O’Rourke said after answering questions from participants. “Every single month as your senator I will be back in Texas holding town halls throughout the state where you hold me accountable for the things that we talked about today.”

Rocío Guenther is a bilingual, bicultural journalist currently based in San Antonio, Texas. She enjoys writing about immigration, the U.S.-Mexico relationship, bilateral trade and travel. Her work has been featured in the Rivard Report, DemocracyNow! and PRI’s The World. Rocío also works as a volunteer Spanish translator for National Geographic’s Out of Eden Walk, spearheaded by Pulitzer-Prize winning journalist Paul Salopek. She tweets from @RocioGuenther.