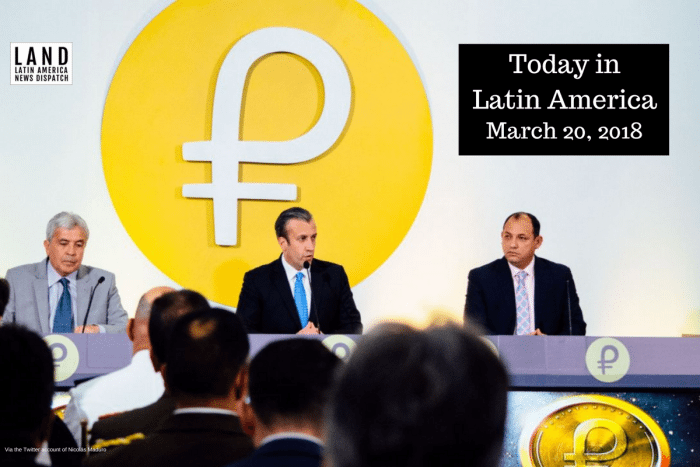 The Trump administration banned all U.S. transactions with Venezuela’s backed cryptocurrency yesterday, arguing it was created to bypass the financial sanctions slapped unto the cash-stripped South American country. The petro, as the new bitcoin is called, was launched February in a move that President Nicolás Maduro hailed was a way to “overcome the financial blockade” that prevents Venezuela from issuing new debt. It is the world’s first state-backed digital currency.

While the Trump administration can’t stop Venezuela from developing the petro —backed by the country’s crude oil reserves— the executive order may have far-reaching consequences due to the global reach of the U.S. financial system, a senior official said yesterday.

In an interview with AP, the 27-year-old chief strategist of the blockchain technology said the petro is not one of the debt instruments targeted by the U.S., even though the financial instrument doesn’t generate interest.

Seven years after the 2011 Allende massacre at the hands of the Zetas cartel in the Mexican state of Coahuila, the country’s governmental human rights agency determined yesterday that the Zetas operated with the acquiescence of municipal police, and called on authorities to make amends to the victim’s families. The agency’s issued recommendation follows a request from late February in which Democrat leaders from the house and senate asked that DEA-led operations in Mexico be investigated, finding the drug enforcement agency’s surveillance activities were linked to violent retaliation from drug cartels.

Victims and social organizations in Mexico City held a minute of silence yesterday to remember the September 19 earthquake that killed 369 people. Six months in, residents from Mexico City who lost their homes still live in makeshift tents outside their damaged buildings, fearful of looters who might steal their remaining possessions and wary of the dwindling solidarity from neighboring communities.

The first ever wholesale market opened in Havana last Friday. The market, known as Mercabal, will sell basic staples as sugar and cigars at a discounted price to 35 worker-owned cooperatives in the island’s capital. Cuba, where the state-run economy accounts between 70 to 80 percent of the economy, has allowed more than half a million people to open private enterprises since 2010.

After declaring a state of public emergency on Sunday, 241 participants in the Jamaica National Service Corps have been deployed to assist in the operations of security forces at the St. Catherine Police Division, south of Kingston. Prime Minister Andrew Holness said the State of Emergency would last for 14 days. Mainly related to gang violence, St. Catherine has recorded a total of 49 murders since the start of 2018.

President Evo Morales traveled to The Hague yesterday to support Bolivia’s bid for access to the Pacific Ocean. What form that access would take in practice is still an open question. For now, Bolivia, which has been land-locked dating back to a late 19th century war with Chile, says it is asking only that the International Court of Justice to order its Andean neighbor back to the negotiating table. Chile’s legal team was present during Monday’s hearings and will have the opportunity to respond before the court this Thursday.

Colombia’s Ministry of Justice announced Monday the combat deaths of nine members of a dissident faction of the Revolutionary Armed Forces of Colombia (FARC) rebels, which signed a peace agreement with the government in 2016. The First Front, active in the southern Amazonian foothills of Guaviare department, brought the issue of FARC dissidence to the forefront last May, when it kidnapped a U.N. contractor sent to monitor illicit crop substitution programming. Minister of Justice Luis Carlos Villegas said authorities were in the process of identifying two rebels, who he claimed were leaders of the front.

The year’s first G-20 summit kicked off in Buenos Aires yesterday amid fears that U.S. President Donald Trump’s import tariffs on steel and aluminum could provoke a global trade war. Speaking to reporters on the sidelines of the summit, which brings together financial policymakers from 20 select world powers, Brazilian Central Bank Governor Ilan Goldfajn encouraged his counterparts to support the international free trade consensus. The meeting is the first of five that will be held in Argentina, culminating in the main G-20 summit on November 30.