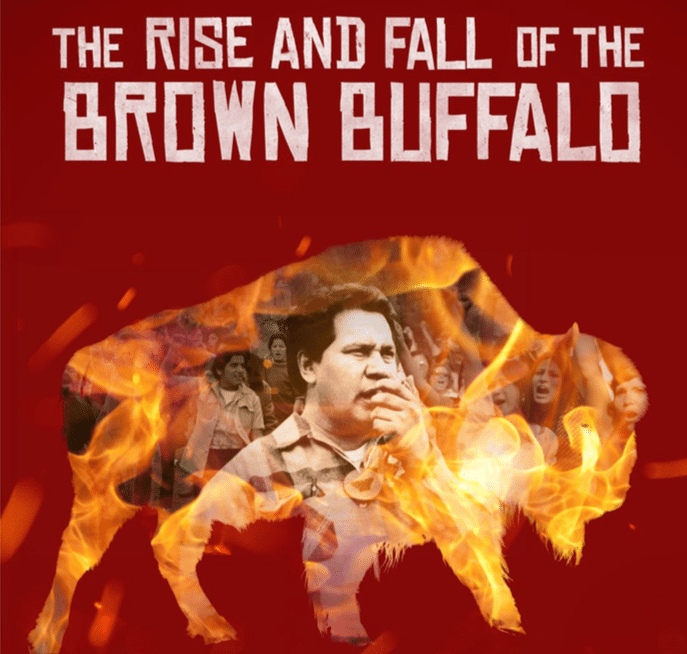 We will be really honest with this review: when the team behind the new PBS The Rise and Fall of the Brown Buffalo documentary (premiering tonight March 23) reached out to us for a sneak peek of the film, we were really skeptical that a nonfiction project about the life of Chicano lawyer activist Oscar Zeta Acosta told mostly in a dramatization style with actors and actresses was not going to work at all.

How skeptical were we?

Very, because in our minds, the story of Acosta’s life —specifically his role in the Chicano movement of the late 60s and his surprising turn as the inspiration for Hunter S. Thompson’s Dr. Gonzo in Fear and Loathing in Las Vegas— merited a very comprehensive and fascinating traditional PBS-type documentary that spoke to the history of those times.

We were dead wrong.

The creative risk director, producer and writer Phillip Rodriguez took to make the narrative arc of his documentary (don’t worry, there is still plenty of archival footage and facts in Brown Buffalo) feels more like a True Hollywood Story than a PBS documentary was brilliant.

As the film starts, it might take the viewer a moment to feel comfortable in this dramatization documentary space, but Rodriguez and team make sure that the message is clear: Acosta was a BIG character in real life, a Brown Buffalo, and this film’s voice will be BIG as well. There is no subtlety here, and rightly so.

Immediately, we are drawn into the Acosta’s fictional character, actor Jesse Celedon, the film’s narrator and lead actor—because as the film begins to share Acosta’s life story, we have literal acting scenes (there’s even a young Acosta character). Once the viewer willingly embraces the format of the film, Celedon’s performance is as humanly imperfect as Acosta himself. The technique of an actor telling and living out the life of the subject he is portraying will fully satisfy the viewer, so take the trust fall and revel in the storytelling,

A perfect example of how the documentary wins you over is the character of Hunter S. Thompson, played by Jeff Harms. At first, it feels almost sacrilege to see Harms play Thompson with uncanny genius, from the expressions to the voice to the drinking. Don’t give us Harms, you might think, give us those classic clips of Thompson in the 70s, high as a kite. But as we begin to see the Thompson character woven into Acosta’s story, Brown Buffalo‘s best moments rise to the top. It was clear that Thompson’s whiteness and Acosta’s browness come to conflict, to the point that Thompson was as racist to his friend as much as any Los Angeles judge. But to Thompson, the racism was not as overt, and the portrayal of that relationship will lead to future discussions of white privilege and microagressions.

“When I finally got around to reading Fear and Loathing in Las Vegas, I was incensed that a white counterculture hero like Thompson would resort to the demeaning, racist characterization to which he subjected Oscar, a person who I considered Thompson’s better,” Rodriguez said in his director’s statement about the film. “Acosta was no sidekick. I figured someone should correct the record. Turned out to be me.”

Other parts of the film show Acosta’s almost mythical portrayal (hence the dramatizations) that questions what is real and what was not. But isn’t that the point?

Granted, the pacing of the documentary might have needed another 30-45 minutes to let it breathe, and some of the dramatization characters feel a bit like overkill (you have to keep track a bit, so be prepared to pause your TV and rewind), but Rise and Fall of the Brown Buffalo is indeed a documentary people need to see and support. It isn’t the typical PBS fare (welcome, young people), and it never hurts to see the history of the Chicano movement in Los Angeles on screen, especially in 2018, when issues of race, class, politics and ethnicity continue to impact society.

We’s sure some will look at this doc and pick it apart because they will probably feel the dramatization choice will trivialize the history of a marginalized community, but that would be grossly unfair to Rodriguez and the film. The film also could have explored Acosta’s misogyny some more, because that topic needed more screen time.

“I want the audience to share in Acosta’s courage, disorientation, rage, and joyfulness,” Rodriguez added in his director’s statement. “I want to introduce to audiences a significant and transformative figure in California and American legal, literary, and cultural history. The goal is to rescue this important historical figure from obscurity and provide context for a man whose complexity is emblematic of today’s Latino: young, urban, impatient, and ready to rumble.”

Rodriguez made an original and genre-bending documentary that speaks to the creative force of Latinos who are taking chances. We should all be applauding that, and here’s hoping PBS and other outlets keep encouraging these types of risks to get made.

P.S. The documentary has some surprise cameo appearances for those who follow California politics. We won’t reveal who made the cameos (it’s more than one person), but let’s just say this: they weren’t bad, but wait until you see who they are.

The Rise and Fall of the Brown Buffalo premieres on Friday night, March 23 on PBS. Check local listings.

And if you can’t get enough (like us) of this story, check out the ZETA podcast, which digs deeper into Acosta’s story.