The following media release was shared Wednesday by ACLU of Northern California: 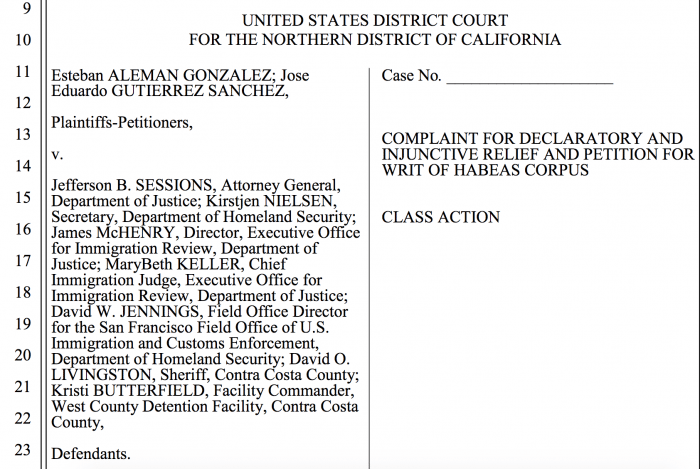 SAN FRANCISCO — Two Bay Area fathers who have been detained for over six months at the Contra Costa West County Detention Facility in Richmond, California sued the federal government today in a class action lawsuit challenging their unlawful and prolonged detention.

Aleman Gonzalez and Gutierrez Sanchez were arrested by Immigration & Customs Enforcement (ICE) officers in the Bay Area in the fall of 2017. They are seeking protection in the United States, and asylum officers with the Department of Homeland Security have determined that both men have a reasonable fear of persecution or torture if deported. Because of this determination, the federal government does not have the authority to deport them.

Nevertheless, the government has kept them in detention and refused to provide bond hearings—proceedings where immigration judges determine whether they can be released back to their families and lives. Both Aleman Gonzalez and Gutierrez Sanchez have young U.S. citizen children and are the primary providers for their families.

“Esteban and Jose are part of our Bay Area community, and their families, including their children, are suffering while they remain detained,” said Alison Pennington, Senior Staff Attorney at Centro Legal de la Raza. “They are simply asking for the opportunity to show a judge that they should not be detained while they pursue their case. What the government is doing to them and to so many others should shock the conscience.”

“When immigration judges refuse to provide these bond hearings, they are grossly misinterpreting federal law,” said Amalia Wille, attorney at Van Der Hout, Brigagliano & Nightingale, LLP. “The Ninth Circuit Court of Appeals has already decided that individuals like Aleman Gonzalez and Gutierrez Sanchez are entitled to bond hearings. Immigration judges are not free to ignore clear binding precedent. Just like all of us, they must follow the law.”

In February of 2018, the Supreme Court ruled in Jennings v. Rodriguez that federal laws do not authorize bond hearings for certain immigration detainees. The Court remanded the case to the Ninth Circuit Court of Appeals to decide whether due process requires a bond hearing. Plaintiffs argue that this ruling, which dealt with a different group of immigrants detained under different laws, provides support for their case.

“The Supreme Court’s recent decision strongly supports Esteban and Jose’s claims,” said Michael Kaufman, Sullivan & Cromwell Access to Justice Senior Staff Attorney with the ACLU Foundation of Southern California. “Jennings makes clear that the federal laws at issue here must be interpreted to require a hearing in cases of prolonged incarceration. This is a basic and fundamental due process protection.”

Attorneys for the plaintiffs estimate the class size numbers in the hundreds. The class is comprised of people detained throughout the Ninth Circuit who have been or will be detained for six months pursuant to a particular immigration statute and denied a prolonged detention hearing before an immigration judge.

“The federal government’s deportation machine is tearing families apart,” said Matthew H. Green, an immigration attorney representing the proposed class in today’s suit. “I see this every day. Time and time again, my clients are held in a cruel and unnecessary limbo while the government keeps them locked up and withholds their right to a hearing.”

The suit was filed in the U.S. District Court for the Northern District of California.