U.S. 2020 Census to Include Citizenship Question 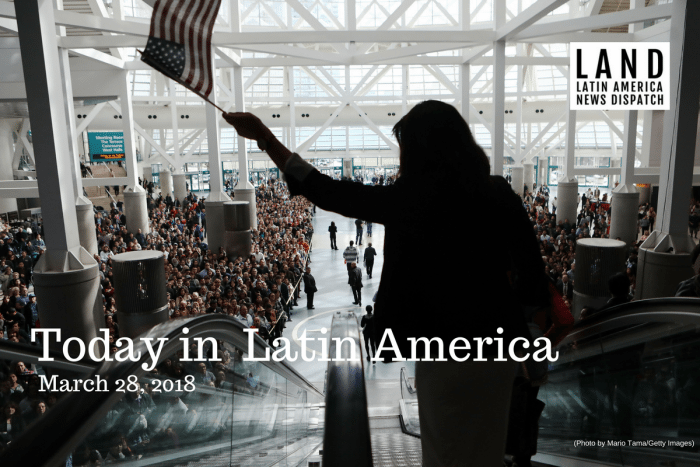 The U.S. Commerce Department announced Monday that it plans to include a question about citizenship in the 2020 census. The Constitution requires that every resident be counted, no matter their citizenship and although the Census Bureau,  part of the Commerce Department, says on its website that the information it collects cannot be used by any government agency or court, the change could lead immigrants (both undocumented and legal) to avoid answering the survey as a precaution. The White House said on Tuesday that it hadn’t made the decision to include the question, but that it supported it.

The argument to introduce the question is that it will allow the Justice Department to enforce the Voting Rights Act. But critics say it is unnecessary as the American Community Survey, a voluntary poll conducted yearly, asks this question to a smaller fraction of the population. The census determines the number of seats each state has in the House and the distribution of federal dollars and critics argue the citizenship question “directly targets” states with large immigrant populations, as New York State Attorney General Eric Schneiderman said. At least 12 states, with California and New York as spearheads, are filing lawsuits against the question, which was introduced at the last possible moment and has not been properly tested.

The Mexican Navy issued a statement on Monday denying any fault in the deaths of civilians during a confrontation with drug gangs in the city of Nuevo Laredo, in the northern state of Tamaulipas across the border from Laredo, Texas. Local media reported that a woman and her two children were killed on Sunday, when Marines were ambushed by a local offshoot of the Zetas Cartel called the Northeast cartel and a helicopter was called as reinforcement. One marine and four alleged gunmen also died and 12 marines were injured.

In order to ensure payment of $4.7 million to retired teachers of Catholic schools in Puerto Rico, a judge ordered yesterday the U.S. territory’s Roman Catholic Church’s accounts be embargoed. The judge considered the 66 plaintiffs suffered “irreparable damage” after the Archdiocese of San Juan eliminated pension payments in June of 2016 alluding to economic recession in the archipelago.

Journalists and activists denounced the passivity of Haitian authorities in the disappearance of photojournalist Vladjimir Legagneur, who went missing last March 14 while working on an independent project in the gang-ridden neighborhood of Grand Ravine, in the capital city of Port-au-Prince. While the head of Reporters Without Borders Latin America bureau decried the intimidation and physical violence journalists in Haiti are subjected to, police authorities said on Monday they feared a “fatal outcome” for 30-year old Legagneur.

A U.S. immigration judge is expected to decide on March 30 whether to deport Juan Samayoa, a Guatemalan accused of paramilitary activities during the country’s civil war in the 1980s and who immigrated to the United States in the early 1990s. Guatemalan authorities claim Samayoa is responsible for dozens of war crimes including rape and murder and are waiting for him with an arrest warrant in hand, while Samayoa argues he is innocent and could be tortured if deported.

Crude oil has been leaking uncontrollably from an oil well near Barrancabermeja, a city in central Colombia, since March 2. Ecopetrol, Colombia’s public oil company and the owner of the Lizama oil camp, has been unable to stop the leakage or determine its cause and yesterday local communities denounced crude oil had started leaking from another hole in the ground near the oil camp. Twenty four thousand oil barrels have been spilled.

A team of journalists from the Ecuadorean newspaper El Comercio was kidnapped yesterday near the international border with Colombia. The team, consisting of a reporter, photographer and a driver, were last seen in Mataje in the northern province of Esmeraldas when two explosions went off . The kidnap has not officially been attributed to any group, but drug  cartels and rearmed former FARC guerrilla combatants operate in the area. The Ecuadorean Ministry of the Interior banned people not local to the border area from going there and said there was a “corresponsability” in the kidnapping of the journalists.

Kenji Fujimori, a Peruvian lawmaker and son of former dictator Alberto Fujimori, finally gave public declarations after a video of  him allegedly offering other lawmakers government contracts in exchange for voting against the impeachment of then president Pedro Pablo Kuczynski. The scandal forced President Kuczynski to resign but Kenji Fujimori now maintains his innocence, promising to act as a witness “in whichever cases it is necessary”. Speculations suggest he might be referring to the corrupt payments his former party Fuerza Popular, led by his sister Keiko, received from Oderbrecht construction giant.

Father Amaro Lopes, a well-known advocate of the the Landless Workers Movement in Brazil, was arrested yesterday on charges of extortion and sexual harassment. Father Lopes was close to American nun Dorothy Stang who was killed in 2005 by landowners, and had recently warned the media he was also in danger. Local police chief Mattoso Ribeiro said that Lopes has been under investigation for over a year. He claims there is evidence linking Lopes to extortion and an alleged recording of a man forced to have sexual relations with the priest.