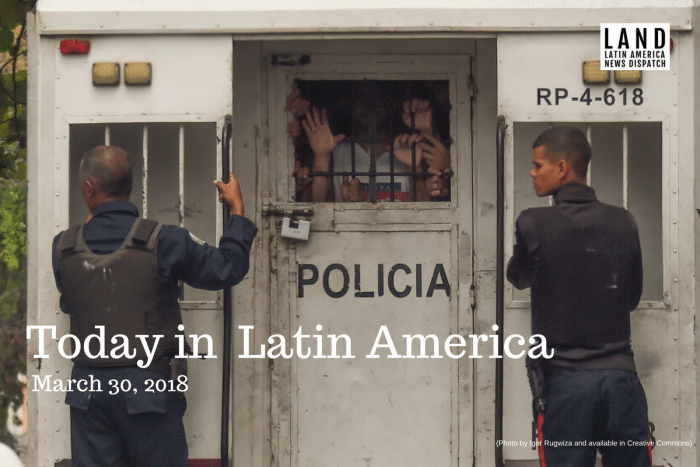 Families of the 68 people killed during a blaze this week in an overcrowded Venezuelan jail demanded information yesterday as to what led to the fire. But many relatives were hit with tear gas as they gathered outside a police station to call for answers.

The family of one of the victims, most of whom were prisoners, claim they were alerted of guards pouring gasoline in holding cells shortly before the fire began Wednesday. Early media reports indicate the fire in the city of Valencia began after a fight between guards and a gang that was holding a party, with an officer reportedly being shot in the leg.

U.S. Defense Secretary James Mattis and President Donald Trump have discussed the possible use of military funds for a border wall with Mexico, the Pentagon said yesterday. The discussion shows the president is looking at other sources of funding for his biggest campaign proposal after receiving only a fraction of the wall budget from Congress last week.

Despite their disagreement over a proposed border wall, the United States and Mexico will join efforts to target drug smugglers off South America’s Pacific coast. The Associated Press reported yesterday that the two countries, as well as Colombia, will begin an operation this Sunday. Given recent tensions, this partnership is a major step toward information sharing and collaboration between the two North American nations.

New York authorities indicted this week a suspected Mexican drug kingpin, claiming he was in charge of trafficking enough fentanyl to kill 10 million people. Francisco Quiroz-Zamora, 41, who’s being held without bail, is known as “El Gordo” and is a presumed member of the Sinaloa Cartel —the same group that was once led by El Chapo Guzmán, who’s awaiting trial in a Manhattan jail.

The discovery of a mangled body part and a hat in the slums of Port-au-Prince has offered more leads to the Haitian police into the disappearance of freelance photojournalist Vladjimir Legagneur, who vanished on March 14 while on assignment in one of the capital’s most dangerous neighborhoods. A police spokesman said that only DNA tests will confirm if the human remains belong to Legagneur. The case has sparked protests over an apparent slow response from authorities.

Costa Rican voters will head to the polls Sunday for the second round of the 2018 presidential election, following a divisive campaign centered around same-sex marriage. Recent surveys suggest frontrunner Fabricio Alvarado Muñoz, an evangelical songwriter who gained popularity after opposing a ruling that supported gay marriage in Costa Rica, is favored to win the election with 55.1 percent of voter support. His center-left rival, Carlos Alvarado Quesada, holds 44.9 percent of support.

Nelson Edilberto Martínez Meléndez, a Honduran community leader and environmental rights campaigner, was gunned down Wednesday morning in his hometown of Las Minas. His death adds up to the growing list of more than 120 land and environmental defenders who have been killed in Honduras since 2010.

Frogs and toads, some of which were presumed extinct, have started croaking again in some parts of Panama after a deadly fungal disease wiped out their populations from 2004 to 2007, a new study reveals. Even though the amphibians are recovering, the fungus can still be found in their bodies. But now some species have developed defense mechanisms against the pathogen, giving scientists new hope.

Two close friends to Brazilian President Michel Temer were among several people arrested yesterday as part of a federal probe into whether he received bribes in exchange for preferential treatment to companies operating in the country’s largest port. Temer has denied the allegations against him, but the arrests indicate prosecutors are zeroing in on the president, who survived a Congress vote last year on a separate corruption case.