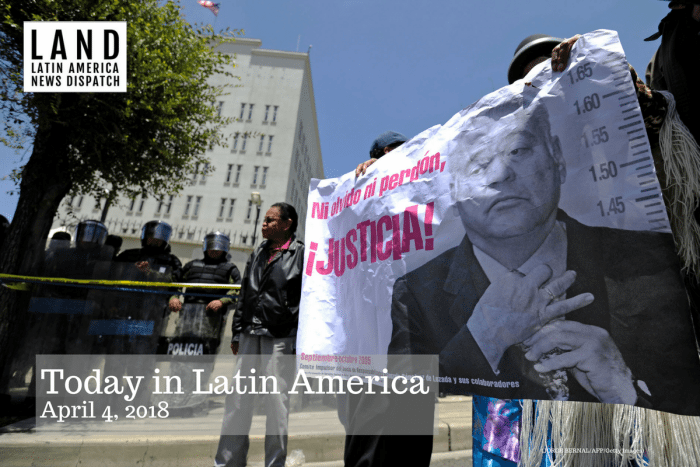 Yesterday afternoon, a United States jury found Gonzalo Sánchez de Lozada, the ex-president of Bolivia, and his then foreign minister Carlos Sánchez Berzaín, responsible for the killings by the Bolivian military of more than 50 indigenous peasants in the city of El Alto during the October Massacre of 2003. The verdict was the result of a three-week-long civil trial held in the Florida Southern District Court in Fort Lauderdale. Goni, as Sánchez de Lozada is generally known, and Berzaín, sometimes called by the nickname El Zorro, the fox, are to pay 10 million dollars in compensatory damages to the plaintiffs, who are the families of eight of the lethal victims of the massacre.

This is the first time in U.S. history that an ex-head of state has been held legally responsible for human rights violations. The rare trial was filed under the Torture Victim Protection Act (TVPA), which grants U.S. federal courts jurisdiction to hear lawsuits filed by non-U.S. citizens for crimes that violate international law. This verdict is an enormous victory for indigenous rights activists both in Bolivia and in the United States.

To read more, check out “Goni and El Zorro Fall, As $10 Million Is Awarded to Indigenous Bolivian Survivors in Landmark Human Rights Case” by LAND staff writer and editor Jacquelyn Kovarik, who was in Florida for part of the proceedings.

UNITED STATES AND MEXICO: Trump told reporters yesterday that he is considering sending troops to monitor the Mexican border until a wall is built. While the use of active-duty service members inside the U.S. is prohibited under federal law, it can be approved in certain situations by Congress. On the other side of the border, Andrés Manuel Lopez Obrador, Mexico’s leading presidential candidate, said during a campaign speech that if this were to happen, Mexicans would answer by forming a human chain of pacific protesters  along the border.

CUBA: The U.S. Department of Transportation allotted several U.S.-Havana flight routes to five major airlines, as demand for flights from the United States to Cuba slowly recovers. Prior to this, airlines witnessed a lull in activity ushered in by Hurricane Irma, the alleged sonic attacks on U.S. diplomats in the Caribbean island and the backpedaling of the Trump administration on former President Barack Obama’s Cuba policies.

COSTA RICA: Epsy Campbell Barr was elected on April 1 as Costa Rica’s first black female vice president, after a presidential campaign that polarized the country around the issue of same-sex marriage making this historical event fly under the media’s radar. An economist and longtime politician, Campbell ran on the same ticket as winner Carlos Alvarado Quesada from the ruling Citizen Action Party, from where she reached out to black Costa Ricans and women.

EL SALVADOR: What felt like a pivotal moment for women’s rights in El Salvador could come undone, as time closes in on the efforts to overturn the country’s total ban on abortion. Two bills introduced into Congress aiming to allow abortion in certain cases could be cast aside this upcoming May by the right-wing Nationalist Republican Alliance, known as Arena, when they assume office. Since 1998, Salvadoran women accused of having abortions can be sentenced up to 50 years in prison and dozens have been convicted after having miscarriages.

COLOMBIA: During the Easter weekend, coastguards of the Colombian navy rescued off its Caribbean coast a total of 100 African and Asian migrants in three different events. The migrants had been robbed and abandoned at sea by human traffickers and were found in the Urabá Gulf,  near the limit with Panamá where South America becomes Central America.

ECUADOR and COLOMBIA: The journalistic team kidnapped last week near the Colombia-Ecuador border appeared in a proof-of-life video released yesterday by Colombian news network RCN. “President Lenín Moreno, our life is in your hands,” reporter Javier Ortega pleaded in the video. The captors have been identified as members of the Oliver Siniesterra Front, a faction that broke off the FARC guerrilla when it put down its arms last year. In the video Ortega asked the Ecuadorean president to free from prison three unidentified members of the group and to end anti terrorism cooperation with Colombia in exchange for their release. The Ecuadorean government criticized the publication of the video, arguing it might spur a media hype that could damage the rescue efforts.

ARGENTINA: The continent-wide Odebrecht corruption scandal has finally reached Argentina. Julio de Vido, former Minister of Planning of Cristina Fernández de Kirchner, is being processed for illicitly providing Odebrecht with contracts for the construction of gas pipelines between 2006-2008. Odebrecht officials confessed to having paid 35 million dollars in bribes in Argentina, however Justice Daniel Rafecas informed that De Vido’s prosecution is based on evidence gained from a local investigation named Skanska II.