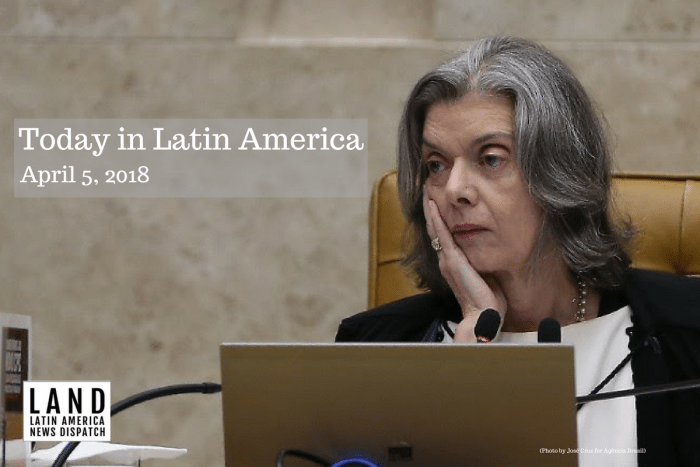 Early this morning Brazil’s top court ruled against former president Luiz Inácio da Silva’s request to remain out of jail while he appeals a 12-year jail sentence for corruption. After nearly 11 hours of televised debate, the court voted 6-5 to deny da Silva’s habeas corpus request, meaning he could be jailed as early as next week. Despite the fact that he faces six additional corruption cases, Lula, as da Silva is affectionately know, leads all polls for the upcoming October presidential elections. The left-wing former president denies any wrongdoing and has argued that all accusations are a ploy to keep him from running again. Last night’s ruling doesn’t technically take him off the ballot as that is for the country’s top electoral court to decide in early August .

Da Silva’s heir and protégé, Dilma Rousseff, was impeached in 2016 for breaking budget laws and was replaced by her right-wing Vice President Michel Temer, who being investigated for corruption.

MEXICO: In response to Trump’s border militarization plans, yesterday the Mexican Senate unanimously decided to suspend bilateral relations with the U.S. in matters of migration and the fight against organized crime. The pronouncement, read by the president of the Foreign Relations Commission Laura Rojas Hernández, demands Trump’s respect for the Mexican people.

PUERTO RICO: The justice department in Puerto Rico filed a lawsuit yesterday against pain-pill giant Purdue Pharma, blaming the company for the U.S. territory’s opioid crisis. The suit, which seeks to hold the company accountable for all government damages related to the opioid crisis, charges the Connecticut-based drugmaker with misrepresenting the risk of addiction. There have been more than 1,600 fatal overdoses in Puerto Rico in the past decade.

PUERTO RICO: A federal court in Puerto Rico ruled to allow transgender people in the U.S. territory to change the gender on their birth certificate. The ruling was issued in response to a lawsuit filed last year by Lambda Legal, a New York-based nonprofit, calling a previous ban on such changes unconstitutional. The Puerto Rican government does not plan to appeal the ruling.

HAITI: Authorities in Haiti are questioning two people in connection with the disappearance of a freelance photojournalist who vanished March 14 while on assignment in Port-au-Prince. Police said those individuals, whose identities are being withheld, were found with a cellphone belonging to the journalist, Vladjimir Legagneur. The case led to protests last month over what critics described as a slow response from authorities.

HONDURAS: The Honduran government responded to U.S. President Donald Trump’s threat to cut foreign aid to the country by highlighting Honduras’ steady reduction in illegal migration to the United States. The Honduran Foreign Ministry noted in a news release that there was a 30.8 percent decrease in illegal migration to the U.S. last year compared to 2016 and that the Central American country has also strengthened its border security. Trump’s threat was in response to the large migrant caravan that has since been disbanded, according to the Mexican government.

COLOMBIA: In a televised debate in Medellín on Tuesday night, Colombian presidential candidates Gustavo Petro, Sergio Fajardo and Germán Vargas Lleras vowed to respect the peace deal signed by the current government if they are elected to office. The peace deal, which demobilized the FARC and ended the longest armed struggle in Latin American history, has been a subject of debate in the upcoming May 27 presidential elections. Right-wing candidate and front-runner Ivan Duque, who is running for former president Alvaro Uribe’s party, opposed the peace agreement as is and vowed to make “structural modifications to the agreement” if elected.

ARGENTINA: Argentina’s Football Association announced Wednesday that it plans to closely monitor youth player boarding houses, following a sex abuse scandal involving two of the country’s most popular clubs. Earlier this week a referee was arrested for suspected involvement in a child prostitution ring of players in the Independiente youth club and a local NGO reported that youth players were allegedly abused between 2004 and 2011.