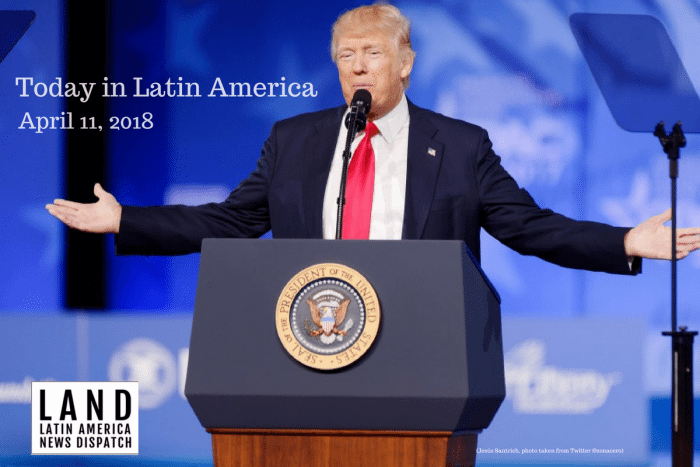 UNITED STATES: President Trump will not attend the 2018 Summit of the Americas in Lima later this week, instead sending Vice President Mike Pence to represent the U.S. delegation. Trump will remain in Washington to monitor the response to the apparent chemical weapons attack on Syrian civilians. Trump’s absence later this week will mark the first time that a U.S. president not attend the summit since Bill Clinton started it in 1994. Though Trump has never traveled to the region, this will be Pence’s second visit after he visited leaders in Colombia, Argentina and Panama in August of last year. Leaders from around the region have had a lackluster response to Trump’s absence, and according to AP some leaders of the region even welcome his absence amidst unease concerning his anti-immigration rhetoric and renegotiation of trade deals.

UNITED STATES: Arizona’s Supreme Court upheld a 2017 Court of Appeals ruling stating that DACA recipients are not eligible to receive in-state college tuition. The fee changes will be implemented immediately and will affect more than 2,000 students. In Arizona, DACA students do not qualify for state or federal financial aid, rendering it impossible for many DACA recipients to achieve higher education.

PUERTO RICO: The U.S. government will grant Puerto Rico $18.5 billion to help restore the archipelago that is still struggling to recover more than six months after Hurricane María, with 54,000 people still without power. According to Deputy Secretary Pamela Patenaude, this is the single largest amount for such assistance the U.S. Department of Housing and Urban Development has ever awarded.

DOMINICAN REPUBLIC: A Dominican court sentenced a businessman for the 2011 murder of a journalist in Santo Domingo yesterday. The journalist, Jose Silvestre, had planned to publish a report detailing the defendant’s alleged drug trafficking activity, and his is the first Dominican case of a journalist killing directly linked to statements made against members of organized crime.

NICARAGUA-TAIWAN: Three ships from Taiwan’s “Friendship Flotilla” arrived to Nicaragua’s shores on Monday, marking the beginning of a two to three-month tour of the island’s decreasing diplomatic allies just weeks after China urged Nicaragua to cut ties with Taiwan, which mainland China views as a renegade province. After Panama cut its diplomatic ties in favor of Beijing in June last year, Taiwan was left having formal relations with only 20 countries, more than half of them located in Central America and the Caribbean in part due to Taipei’s generous aid programs.

BOLIVIA: Luis Almagro, secretary of the Organization of American States, tweeted on Monday that re-election is not a human right and, as such, impeding reelection is not a human rights violation. Almagro had requested a report on the matter from the Venice Commission, an advisory body in constitution matters of the Council of Europe. Bolivian President Evo Morales is currently bidding for his third reelection after claiming that term limits violate a leader’s human rights and the Bolivian Minister of Justice, Hector Arce, dismissed Almagro’s declarations, pointing to his statements as politically motivated and questioning the legitimacy of the Venice Commission as an institutional organization.

BRAZIL: Twenty people were killed and at least four were injured in an attempted prison break in Para, Brazil yesterday. The deaths were the result of a gun battle between police and a group of gunmen who attacked the prison in an attempt to stage a mass inmate escape. According to a statement from Para’s public security secretariat, the inmates were also armed at the time of the attempted breakout and it remains unclear how many of the deaths were of inmates and how many were of gunmen. Last year in Brazil prison gang wars lead to at least 125 deaths.

BRAZIL: Carlos Alexandre Pereira Maria, a cited witness in the investigation of the assassination of city councilwoman Marielle Franco, was found dead on Sunday night in a car near Curumau, east of Rio de Janeiro. Pereira, like Franco, was a known activist and lobbyist and had previously worked as a city advisor for Marcello Siciliano. Franco and her driver, Anderson Pedro Gomes, were assassinated on March 14 while returning home from Rio de Janeiro after an event called Young Black Women Moving Structures. The investigation of her death continues.