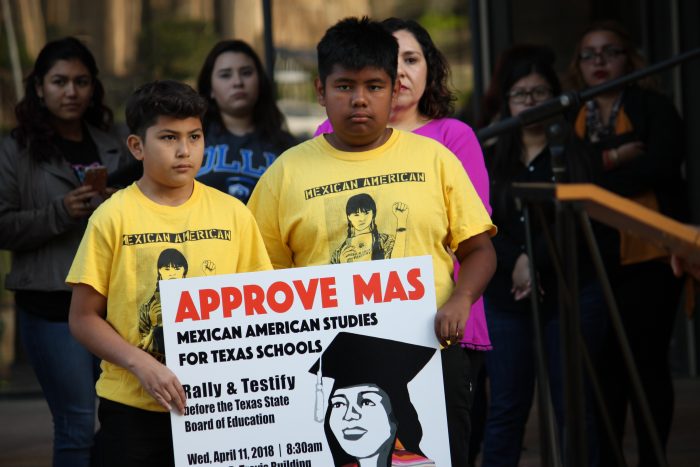 Two of the students at the MAS rally in Austin on April 11, 2018 (Photo by Christine Bolaños)

AUSTIN — Following a Wednesday rally and after hearing testimony from about 30 supporters, the Texas State Board of Education (SBOE) gave a preliminary green light to establish a standard high school elective course for Mexican American studies. However, despite pleas from all Latinos sitting on the board, most members voted to call the course “Ethnic Studies: An Overview of Americans of Mexican Descent,” thereby removing “Mexican American” from the class’s name.

Four of the five Democrats on the board, including Marisa Perez-Diaz of Converse, Ruben Cortez of Brownsville, Erika Beltran of Fort Worth and Lawrence Allen of Houston, voted against the new name.

The course was a culmination of the advocacy of several organizations, leaders, educators, students and parents working since 2013 to ensure a fair and accurate representation of Mexican American history and culture was integrated into Texas school curriculum. The board elected for the course to model the curriculum already in place in Houston school district’s Mexican American Studies, or MAS, course.

The course allows students to explore “the complexities of the Mexican American experience” while adhering to Texas Essential Knowledge and Skills standards. Advocates said more than 70 school districts in Texas expressed support for the course. If the board gives final approval for the class, educators across Texas will now have state-approved guidelines to follow.

Juan Tejada of Somos Mas/Mexican American Studies in San Antonio created a campaign on Change.org to draw support for approval of the course.

He pointed to research that shows positive educational outcomes for students who take MAS courses, including higher grade point average, retention and graduation rates. The campaign made the case the course helps students develop critical thinking skills and a “more humanistic understanding” of their own history and culture and that of other ethnic groups in Texas and the United States.

According to testimony from Sophie Torres, vice president of government affairs at the San Antonio Hispanic Chamber of Commerce, which is part of the Responsible Ethnic Studies Textbook Coalition along with scholars and groups like MALDEF, Latinos now make up 54 percent of the 5.4 million Texas public school students.

“As our world becomes more diverse and interconnected, the need for more diverse classroom courses is needed,” Torres said. 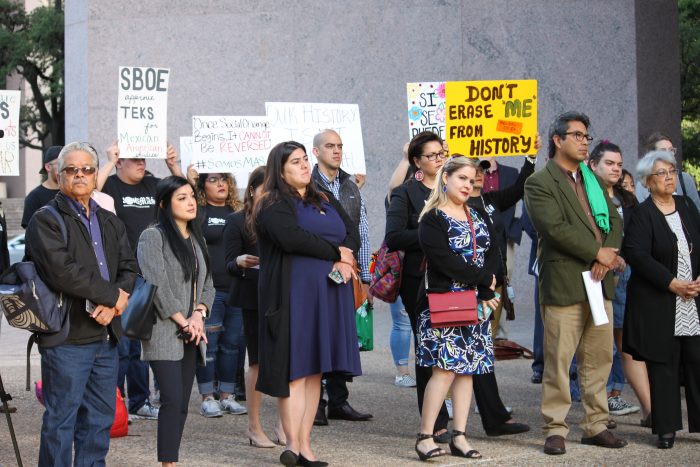 MAS Supporters outside William B. Travis building in Austin on April 11, 2018 (Photo by Christine Bolaños)

The percentage of Latino students is expected to increase to nearly 70 percent by 2050.

“The success of our current students is vital for the success of Texas’ future. They are our future workforce. We must encourage them in any way we can,” she said.

Part of that encouragement comes from teaching them about their ethnic group’s contributions to inspire them to make a difference someday as well, supporters argued. For students like Jaelynne Mendola some day is now.

“People in our community don’t really know about their culture. Growing up they probably hid it because they didn’t want others to know or judge them based on what they do in their culture,” the seventh-grade student at KIPP Camino Academy in San Antonio said at Wednesday’s rally, held in front of the William B. Travis building in Austin where the SBOE held its meeting.

She believes the course will help youth become more open, honest and proud of their heritage. Non-Latinos also have the potential to become more open-minded and accepting of others if they choose to take the course, she said.

Mendola and three of her classmates traveled to Austin with their teacher on an excused absence to testify in support of the course. Their teacher Lucero Saldaña said the students have written essays in support of MAS and rallied for petition signatures at their campuses. Despite how time-consuming and expensive it can be, teachers like Saldaña have offered their own MAS courses in lieu of a standard statewide class.

High school freshman Clara Perez is planning to take MAS dual credit course in the fall. Perez was filled with emotion as she addressed the crowd of supporters and reporters gathered for the rally shortly before the start of the meeting Wednesday.

“This course, I don’t just want it in my school. I need it,” Perez said through tears, as she mentioned learning about historical figures such as labor rights activists Dolores Huerta and César Chávez.

Perez was joined by dozens of other witnesses who testified about the benefits of a standard MAS course in Texas, including Jayme Mathias, who serves as executive director of the Mexican American School Boards Association.

He praised the Fort Worth school board for “making history” in Texas on Tuesday night by declaring a student holiday and day of service in honor of Huerta and Chávez.

“Our kids deserve Mexican American studies,” he said, as others cheered in support.

State Board member Marisa B. Perez-Diaz (D-Converse) has long supported a MAS course and expressed how her feelings of comfort discussing the topic with her colleagues meant they were making headway.

However, she did express reservations about the course’s name change.

“Time and again we’ve heard that research supports the positive progress that students see with any kind of ethnic study when it’s specific” she said.

Board member David Bradley, a Republican representing Southeast Texas proposed the name change, and said he couldn’t support “hyphenated Americanism” because he believes it leads to divisiveness.

Perez-Diaz said as someone who identifies as Mexican American, her experience was different from Bradley’s and the course’s original name would have better reflected that.

“I’m asking you to be inclusive. I think a vote in this direction sends a message we are not about inclusivity,” she said.

Supporters of the MAS course were also disappointed in the name change with some, such as Angela Valenzuela, who serves as director for the Texas Center for Education Policy at the University of Texas at Austin’s College of Education, calling it paternalistic decision of the SBOE’s part to “name us in their own image.”

“Not only did their naming us rob us of any true sense of accomplishment, it also spoke volumes about what the SBOE thinks of Texas’ Mexican American community, including the children and college students assembled there,” she wrote in a blog post.

However, she promised that advocates will continue pushing for a course name of their own choosing. 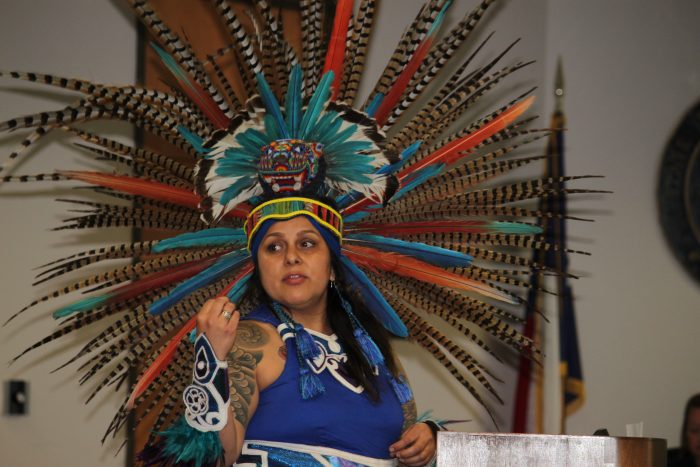 One of the MAS supporters who spoke at the SBOE in Austin on April 11, 2018 (Photo by Christine Bolaños)

Today’s vote is in sharp contrast to 2014 when the state board rejected implementing a Mexican American studies course. The board hasn’t adopted a MAS textbook and has considered and rejected two proposed textbooks, because one was considered racist and the other not comprehensive enough by the board.

According to the Austin American-Statesman, if the board officially approves the course, Texas will be the only state beside Arizona to have implemented a MAS course in public schools.