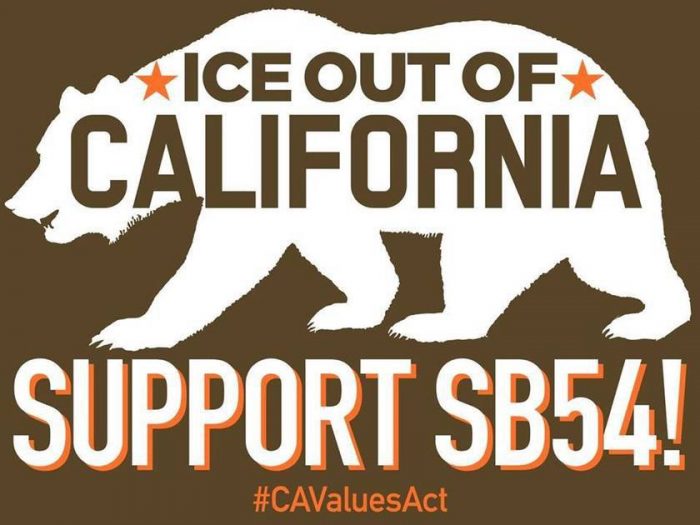 At city council meetings across Southern California about Senate Bill 54 (The California Values Act), community members have been uniting against racism and anti-immigrant sentiment. We’ve been calling for immigrant rights and ICE out of our neighborhoods, including the assurance that schools, libraries, hospitals and other places are accessible to all. This solidarity is in stark contrast to the hate and anger coming from much smaller groups of people wearing red hats and waving anti-immigrant posters in opposition to SB 54. Few mainstream media outlets are documenting these important differences. But, for those of us committed to building, living, and working in welcoming communities, such disparities in actions and numbers are significant.

Only a handful of SB 54 opponents were at San Dimas’ city council meeting last week. Outside, before the meeting, two continually invaded people’s personal space and yelled insults at the large circle of community members who were demonstrating their support for undocumented immigrants. In response to these verbal attacks, supporters of SB 54 from children to elders locked arms in a powerful display of solidarity.

What a great day to be a #Californian!@LosAlamitos takes on #SB54 head-on, rejects #SanctuaryState, welcomes #ICE into its city limits. @kdeleon faces another epic defeat, along with @ocdemparty @CA_Dem pic.twitter.com/FqckXtnmhk

About twenty-five SB 54 opponents attended West Covina’s council meeting a week earlier. They were outnumbered there too. But, throughout the meeting, when supporters of SB 54 spoke during the open session, they often shouted anti-immigrant epithets, and a few waved inflammatory posters. Many anti-SB 54 speakers used rhetoric criminalizing immigrants as making cities unsafe. The reality has been the reverse. Nationally, as the Southern Poverty Law Center reports, the number of hate groups and hate crimes have increased during Trump’s presidency. This has fueled division and reduced a feeling of safety for many.

During a short break in the four-hour West Covina meeting, vocal opponents of SB 54 rushed California State Senator Kevin de León and started shouting at him. My family and I were nearby, and people were badgering us and others as well. Rather than work to restore civil discourse, much of this hostile climate went unaddressed by city officials. At times, the chambers felt like an anti-immigrant rally and not a place for city business.

Showing so much strength in the face of hate, supporters of SB 54 have been educating. One at a time, parents with young children, teenagers, educators, college students, veterans, lawyers, first responders, members of the faith community approached the podium in San Dimas and West Covina. Each providing testimony, speaking with conviction and from our own positions. Educating about the linkages between US imperialism and migration, calling for due process for all, and correcting the record about crime and the fallacy about not paying taxes. Much of the emphasis has been on unity and community over division and exclusion.

While the anti-SB 54 demonstrators going from city to city are a small segment of Southern California, they are vocal. And, some politicians and others in power are emboldening them by perpetuating xenophobia, along with anti-Mexican and anti-Central American ideologies and policies. However, as Kopetman and Goulding highlight in a recent Orange County Register article, “Most of California either supports or has taken no action to voice its position to SB 54.” This is significant, and it cannot be overlooked. At both West Covina and San Dimas city council meetings, supporters of SB 54 and immigrant communities have been the overwhelming majority.

We must continue to stand in solidarity against attacks on immigrants. We were strong and triumphed in West Covina, ensuring that the city does the right thing by following what is already California policy. We must do the same in any other place that aims to use immigration as a wedge issue to distract us and to fuel exclusion, division and inequality.

Gilda L. Ochoa is Professor of Chicana/o-Latina/o Studies at Pomona College. She researches and writes on Los Angeles-area communities.