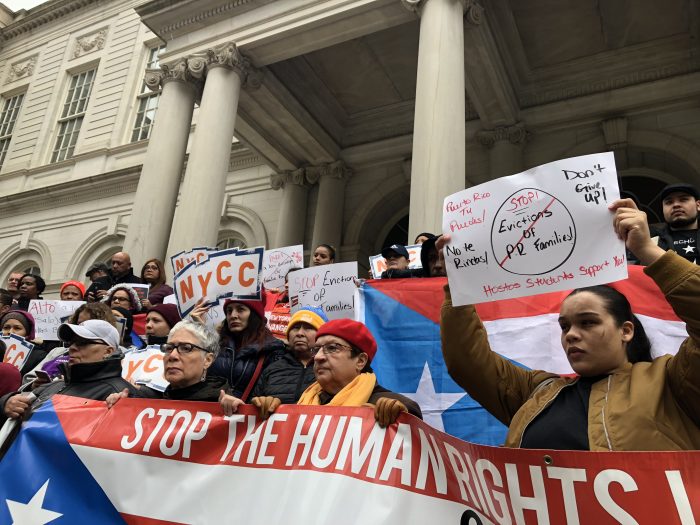 Dozens of activists, community leaders and displaced families assembled at New York City Hall on Thursday, April 19, 2018. The demanded an extension of FEMA’s Temporary Sheltering Assistance program and demanded the city to provide tools and services to guide them establish a new life in New York City. (Photo by Claudia Irizarry Aponte)

NEW YORK — New York City Mayor Bill de Blasio announced in a Thursday statement that the city will be picking up costs for temporary housing of 83 displaced Puerto Rican families to “make sure they don’t get thrown out on the street.”

This announcement comes almost a week after the Federal Emergency Management Agency (FEMA) said that it would not extend its Temporary Sheltering Assistance (TSA) program for 83 families living in hotels in the city.

FEMA will pay for their lodging until April 20. But over the next few days, the city will get in touch with each of the hotels where these 83 families are staying and let them know they will be picking up the cost, according to José Bayona, a spokesperson for the Office of the Mayor. These 83 families amount to over two hundred people.

“We know these people won’t be there forever because they need to restart their lives,” Bayona said.

The costs, according to Bayona, will be taken from the city budget.

“We are establishing a deadline,” he added. “The idea is to help them and see how we will continue helping these families.”

City Hall announced they will cover the living costs of displaced families:

“The Federal Government abandoned its responsibility to U.S. Citizens by failing to extend FEMA’s Temporary Shelter Assistance for 83 families in FEMA hotels in New York City." (1/3)

City Hall announced they will cover the living costs of displaced families:

“The Federal Government abandoned its responsibility to U.S. Citizens by failing to extend FEMA’s Temporary Shelter Assistance for 83 families in FEMA hotels in New York City." (1/3)

"We remain committed to helping these U.S. citizens who are already here in New York get back on their feet and will pick up the costs for temporary housing to make sure they don’t get thrown out on the street.” (3/3)

A FEMA spokesperson said that the 83 families who are being asked to check out likely did not meet the eligibility criteria for TSA. Survivors who can’t verify their occupancy, confirm their primary residence, have duplicate applications for assistance, and who have not claimed sufficient structural and utility damage are not eligible for TSA. If they are considered ineligible for TSA, they are given a 5 to 7 day notice to check out of the hotel.

As of April 16, there are 171 families living under TSA in New York state and over two thousand families in 35 states and Puerto Rico, according to the same FEMA spokesperson.

“This timeline will permit our displaced residents the additional time they need to have their children complete school and return home,” the letter, written on behalf of Governor Ricardo Rosselló, said. 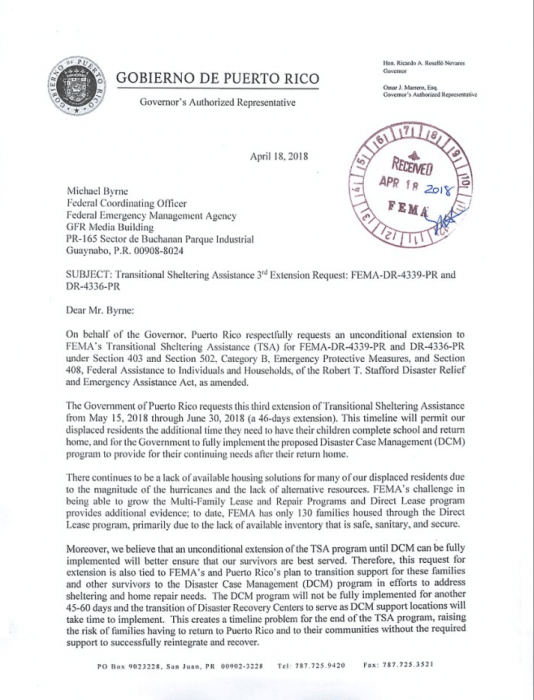 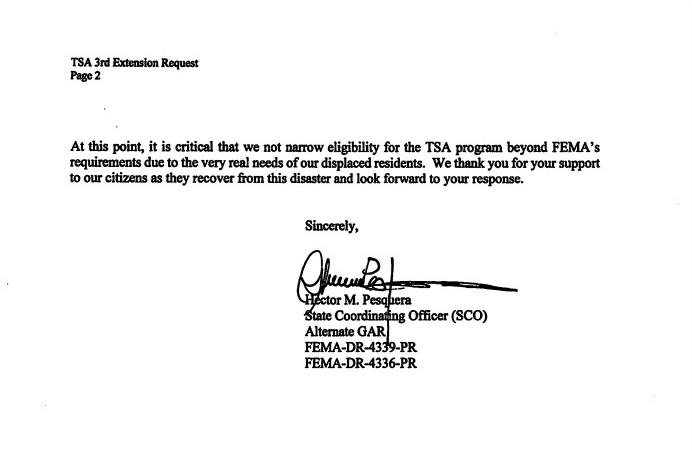 The TSA program will expire for 50 additional families in New York City on May 14 unless Rosselló’s request for an extension is granted.

On April 19, several dozen of activists, community leaders and displaced families gave a press conference on the steps of New York City Hall to demand an extension of FEMA’s TSA program and for the city to provide more tools and services to guide them establish a new life in New York City.

In a prepared statement, Sonja Shield, the President of the Legal Services Staff Association, asked New York state “to intervene today and end this homeless crisis.”

“All we are asking is for our government and state to live up to their promise to help.”

“We saw as hundreds of thousands of Puerto Ricans had to leave the island not because they wanted to, but because they had to,” Gustavo Rivera, a New York State Senator representing the Bronx, said. “We are about to see another failure of our federal government.”