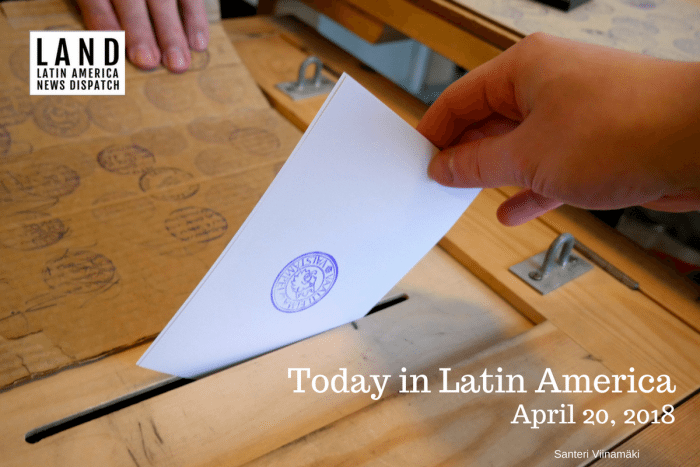 PARAGUAY: Paraguay is holding elections for president, governors and all seats of both the upper and lower houses of Congress this coming Sunday. The favorite to win the presidency is Mario Abdo Benítez, the candidate for the ruling conservative Colorado party—which has won all but one election since the return to democracy in 1993.

Abdo is the son of the private secretary of former dictator Alfredo Stroessner, who ruled Paraguay for 35 years. Recent polls show he’s up by 25 points, but his party is projected to lose seats in Congress to the leftist Frente Guasu coalition, led by former president Fernando Lugo, who was impeached in 2012.

Paraguay is the world’s fourth biggest soybean exporter and its economy has steadily grown in the last five years, but one quarter of the country’s population still lives in poverty.

MEXICO: Mexico’s Chamber of Deputies unanimously approved a bill yesterday that would eliminate judicial privileges and exemptions for presidents and public servers. The decision is part of a wider effort against corruption within public offices and governmental administrations. The bill, which amends different segments of eight articles of the constitution, now goes to the Chamber of Senators for revision.

MEXICO: Mexican immigration agents discovered yesterday a total of 191 immigrants, mostly from Guatemala, crammed into a truck and a bus in conditions described as “inhumane.” In the state of Veracruz, 103 immigrants were found in a truck, after spending two days without food or water; 55 of them are underage. The remaining 88 immigrants were found in the state of Hidalgo on a bus designed for 42 people; 45 members of this group are underage. Since the start of an immigrant caravan in March, immigrant mobilization has been notoriously constant. The caravan is still on the move northward and a group is set to reach the U.S. border in Tijuana and ask for asylum.

CUBA: Cuba’s new President Miguel Díaz-Canel was celebrated by the island’s allies yesterday, with Russian President Vladimir Putin and Chinese president Xi Jinping extending their congratulations and expressing a desire to extend deeper political ties with the country. The United States, on the other hand, expressed “disappointment” over the change and Cuban-Americans in Miami do not expect to see change under the new leader.

PUERTO RICO: A federal control board overseeing Puerto Rico’s finances approved new austerity measures yesterday, saying the actions will vitalize the U.S. territory’s economy and create new jobs. But Gov. Ricardo Rosselló immediately vowed not to impose the cuts, potentially setting the stage for a court battle. The measures include cuts to pension systems, closure of prisons, consolidation of state agencies and reductions in government subsidies.

GUATEMALA: Guatemalan prosecutors and a United Nations anti-corruption commission again accused President Jimmy Morales of illegal campaign financing yesterday. Prosecutors said there is evidence that Morales received more than $1 million in campaign donations when he was secretary general of his National Convergence Front party and that the donations were not reported to the electoral court. Yesterday’s accusation is the second phase of a graft investigation against Morales that was first announced in August.

COLOMBIA: Over 270,000 people in southwest Colombia were left in the dark after the ELN rebel group attacked electrical power lines on Wednesday evening. Towns along the Pacific coastline between the border with Ecuador and the port city of Tumaco were affected. This is the third time this year the region’s electrical infrastructure has been attacked by armed groups.

VENEZUELA: Finance ministers from the United States and 16 Latin American and European nations met at the sidelines of the International Monetary Fund’s spring meetings to discuss Venezuela. They talked about measures to find and expropriate the proceeds from corruption and to provide assistance if and when the government of Nicolás Maduro is replaced. The Colombian minister, Mauricio Cárdenas, said a $60 million rescue package was in the works for the time when a government willing to follow “the correct economic policies” was in power. Meanwhile, the Venezuelan government announced the normalization of its diplomatic relations with Spain, with the reinstating of each other’s ambassadors, whom had been expelled in January.

CHILE: Thousands of Chilean students marched yesterday to protest a decision by the country’s Constitutional Court to allow for-profit companies to own universities. In Chile higher education is by law non-profit, but critics claim that some companies turn profits by exploiting loopholes. Organizers calculated 100,000 students marched in Santiago and 250,000 nationwide, but police said there were only 30,000 in the capital. This is the first major protest since right-wing millionaire President Sebastián Piñera returned to power last month. His first term, from 2010 to 2014, was marked by massive student protests.

CHILE: A man believed to be the world’s oldest person died Wednesday after falling out of a hospital bed in the Chilean town of San José de Mariquina. Celino Villanueva Jaramillo, who was 121 years old, fractured three ribs when he fell and one of them punctured his lung. The centenarian was born on July 25, 1896, but the Guinness Book of World Records did not recognize him because his date of birth lacks official verification.