Nicaragua Today: The Country That Hurts and Matters to Me 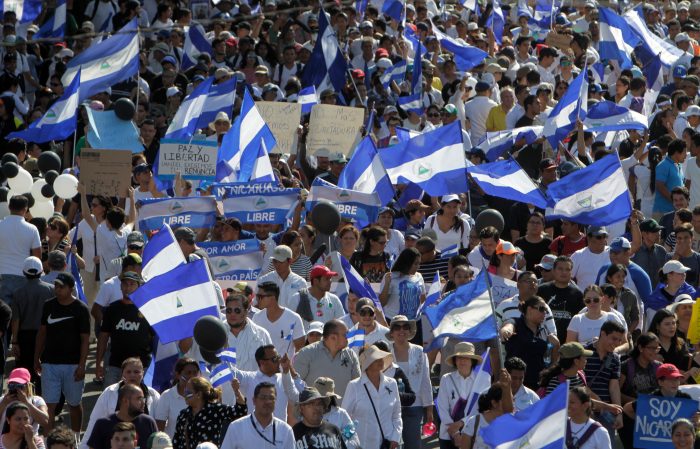 Part of the “Walk for Peace and Dialogue” in Managua on April 23, 2018. (INTI OCON/AFP/Getty Images)

Chinandega, Nicaragua, 22 April 2018: When Daniel Ortega returned to power by popular vote in 2007, he promised not to turn to the same old repressive and anti-democratic tendencies of the 1980s. A good part of the population believed him and gave him the benefit of the doubt. Personally, I did not really believe it. Still, because we were no longer at war and were 16 years into democratic governance (governance marked by many serious acts of corruption as well as practices that impeded full democracy, but democratic nonetheless), I thought that Daniel Ortega wouldn’t have the wiggle room to play tricks. I thought he would have to submit to the principles of Western democracy in its fullness and with all of its many faults. I thought that even that would be the best option given the state of our modern world.

Ortega began to show signs of his authoritarianism during his first term (2007-2012), the only legal term of the three that he has served up to now. For time’s sake, I won’t unpack each and every one of his authoritarian and anti-democratic acts. Rather, I will highlight the most exemplary and disastrous of them all: he was successful in getting the Supreme Court of Justice to dismiss the article in the Nicaraguan Constitution that prohibited re-election for consecutive terms and that prevented anyone who had already served as president twice from serving a third term as “anti-constitutional and in opposition to human rights.” The latter was exactly the position in which Ortega then found himself. He first overcame the legal stopgap, thanks to Sandinista judges (read: Orteguistas) who modified the Constitution at their discretion and implemented indefinite re-elections. In other words, anyone could now be an eternal candidate for their party until that person either grew tired of the role or died.

Numerous openly fraudulent municipal elections (2008, 2012, and 2017), as with the rigged national elections that took place in 2011 and 2016, form part of the “prestigious track record” that Ortega and his entourage claim. There have been plainly obvious and scandalous acts of corruption; these include those committed by Ortega’s general and who knows how many more of his inner circle in the Augusto C. Sandino International Airport; in the Internal Revenue Services (DGI), the tax-collecting institution led by Director General Walter Porras and his closest associates; in the Ministry of Education through the granting of fraudulent licenses to Orteguista contractors who never completed the projects for which they were hired but nonetheless took the money meant to build and repair schools; by functionaries with blatantly corrupt track records so bad they merited international sanctions (as happened with the United States); through the Magnitsky Law that designated as president of the country’s electoral institution Roberto Rivas Reyes, an openly corrupt individual who makes no attempt to hide his corruption put on display by his luxury-laden social life.

Ortega has further rewarded Rivas Reyes by relieving him of his responsibilities but keeping him in charge. Since this past December, he hasn’t shown his face in public. There are many, many more signs of corruption in Ortega’s government that have won us an “honorable” mention on the list of Latin America’s most corrupt states and a spot near the bottom of the worldwide list of corrupt countries, according to an annual report issued by the ONG Washington Transparency International (TI).

Ortega exercises absolute control in all of the state institutions. The General Comptroller of the Republic] (CGR) totally “colorless, odorless, and flavorless” and “blind, deaf, and dumb”—there is never a single act of corruption listed on its annual reports. The judicial system is comprised of judges and magistrates totally at Ortega’s disposal. The National Assembly is made of legislative representatives who have pledged to serve Ortega and don’t even change a single comma in the proposed bills that Ortega sends them. In all, 92 representatives, Orteguistas and members of the opposition, are entirely at the beck and call of Ortega’s interests and whims.

The INSS is supposed to look after the interests of the millions enrolled in the Nicaraguan system. But with Roberto López Gómez at the head, and after more than 11 years of Ortega’s leadership, the INSS is one of the clearest signs of corruption in Ortega’s government. Its fraudulence is so scandalous that the institution is on the brink of collapse, endangering the pensions of those who already receive social security and those of us who are next in line.

The signs are many, among them millions in fraudulent self-authorized loans made by and for INSS directors; financial expenditure toward works of dubious origin and for capital reimbursement; overpriced spending on medical clinics; grossly inflated salaries for INSS employees as compared to workers of the state’s other institutions; and an extraordinarily high annual bonus for INSS employees.

Each December, all of Nicaragua’s workers receive a bonus called a “tip” or the “thirteenth month” wage. However, INSS employees receive what’s akin to a thirteenth-plus-fourteenth month bonus. Off-the-record employees who are, in general, faithful Orteguistas are rewarded with under-the-table funds from INSS. Facing a bankrupt system, its directors decreed various reforms in the shape of a tax aimed at rescuing INSS from collapse. They did so in instead of following any of the recommendations made by independent expert economists. Their counsel included reducing administrative costs, selling some of its acquired assets or cutting back on any of the large disbursements made by the INSS that failed to result in returns (e.g., a condominium building in which the INSS invested more than $12 million but that has yet to sell a single apartment due to high price listings), eliminating the “fourteenth” month bonus paid to INSS employees, or reducing supernumeraries and off-the-record employees from its payroll, among other recommendations.

All of this began with protests that were initiated by students of UCA—these were peaceful protests that took place on the university campus, at the Camino de Oriente mall, and at various other sites in Managua. These peaceful protests were violently disrupted by the Sandinista Youth (JS), who attacked the university students. The Police supported the JS by protecting and equipping them.

On April 19, the second day of protests, other universities joined the demonstrations, which extended to Masaya in the neighborhood of Monimbó, where a lot of violence occurred—the first three deaths took place that day. On Friday April 20, now the third day of protests, demonstrations spread to more cities, among them Chinandega, where I personally joined. ‘

I marched as a Nicaraguan citizen.

Meanwhile, Vice President Rosario Murillos called us “vampires” because we were supposedly bloodthirsty and “vandals” who bowed to other interests. Under the slogan “No to the reforms” (“No a las reformas”) and “Daniel, Somoza: one and the same” (“Daniel y Somoza: la misma cosa”), we peacefully marched from the city entrance into the city center. The JS harassed us, and the police protected them. We paid them no mind and continued to march in peace, bearing our white and blue flags. At 6pm, in the old part of town called Ferretería Navarro, they assaulted us with rocks. We withdrew to the church of San Antonio, where we stayed. On Saturday the 21st, the fourth day of protests, Chinandega marched again, this time with more participants: people of all ages took part, but young people formed the majority. They made it clear that they were no longer simply demanding the abolition of the disastrous reforms to INSS, but that the protest was now an escape valve for tensions that had built up as if in a pressure cooker, accumulating over the course of 11 repressive years that we had silently endured. Now we were marching for changes in the nation at large—changes to all of the disastrous circumstances that I recounted above. And why not? The head of the dictator, too: his resignation.

This Sunday, the struggle manifested in calmer demonstrations in Chinandega. Those of the Orteguismo let us march without their violence. We continued despite the fact that the dictator had discarded the INSS reforms: the struggle has become larger than that. The reforms were just a flashpoint. The people now want more, including a seat at the table for a dialogue to be headed by Cardinal Brenes. He will incorporate on the meeting agenda the most salient talking points and those which the Nicaraguan people demand: prison for Roberto Rivas; the firing of all those corrupt officials elected in fraudulent elections; autonomy for all local governments; the reinstitution of the nation’s various agencies, among them the powers of attorney, army, and police; reforms to the Constitution, including the repeal of the article that permits consecutive and indefinite re-election; as well as early elections, among other important aspects necessary for the re-establishment of peace and social justice in Nicaragua.

The struggle continues. We hope that we can meet at the table of dialogue. We don’t want to return to the streets except to celebrate. If the dictator thinks that the repeal of the INSS reforms were enough to quiet our people and that we would be content to return to our houses and business as usual, he’s mistaken. We’ll be here, in the struggle. The INSS reforms (the stupidest political mistake of those old, sly foxes) were only the trigger for a new liberation of Nicaragua—and the equivalent (with all due respect) to the assassination of Dr. Pedro Joaquín Chamorro some 40 years ago, in 1978, whose criminal death resulted in the overthrow of the last dictator, Somoza.

This is my opinion and that of thousands of Nicaraguans, regarding the last five days. The events since April 18 initiated protests from young people and university students in Managua. I hope this account provides helpful context.

Translated by Catherine María Rodríguez
New Haven, CT, US, 23 April 2018
Translator’s note: The following is the personal testimony originally written in Spanish by Carlos René Cruz, a family friend on the ground in Nicaragua. READ & DISTRIBUTE WIDELY. If you are a member of the press interested in publishing, please contact me via Twitter: @latinadramaturg