Meet Manuel, a Participant in the Refugee Caravan Arriving at the US-Mexico Border This Week

For over a month, Manuel has been waking up every morning close to 7am to walk, march, jump on trains, and grab a few buses on a long 2,000 mile journey to the U.S.-Mexico border. He has been traveling from El Salvador on the Viacrucis Caravan as a result of being forced to flee his home country and seek asylum in the United States.

Manuel was deported from the U.S. about a year ago. He left and tried to figure out how to live a dignified life in El Salvador while separated from his wife and children. However, living in El Salvador has proven too dangerous because gang members have been extorting Manuel for so much money, that he cannot afford to live. Additionally, if he refuses, if he can’t afford to pay or he misses a payment, the gang will make an example of him, and threaten his life. Because the entire country of El Salvador is so heavily gang populated, he has nowhere to flee to. The only safe place he has left is with his family in the U.S. 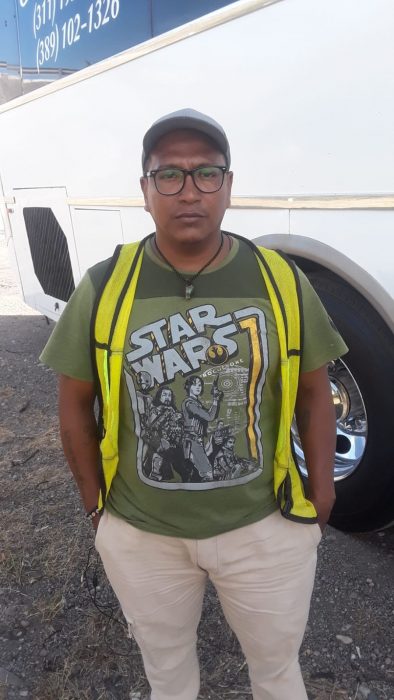 Manuel is 34, born in El Salvador and returning to the U.S after being deported. He is seeking asylum to escape gang violence and crime in El Salvador.

For years, he created a stable life in the United States. He has three children, two of which have autism. They have been without a father for longer than any family should be. Manuel is the main breadwinner for his family, and they have been struggling financially without him. He is also a loving husband, a friend, a father, and a mentor and guide to his children. He recognizes how important it is for him to be present for his family, his autistic children must develop the confidence, courage, and independence they are capable of achieving—but this is only possible if they have a strong unit to support them.

Now, in order to reunite with his family, he finds himself traveling with other migrants on the Viacrucis Caravan, which is organized by Pueblo Sin Fronteras. The caravan is the safest option for migrants traveling through the treacherous territories of Mexico, where murder, rape, beatings, robbery, and kidnapping by the cartels and corrupt police are common.

“We are people. We are as valuable as anyone. We just want the rights, the safety, and the opportunity to survive. We want to be looked at as humans,” Manuel tells us.

Manuel has a main objective: to seek asylum from El Salvador and be safe with his family. Sadly, Manuel’s country of origin has been crippled with government corruption, human and drug smuggling, violence and gang-infested neighborhoods to a point where violent deaths have become a societal norm.

Ironically, a lot of the country’s problems originate from the U.S. During the civil war of the 1980s in El Salvador, the U.S. aided the Salvadoran military for years—contributing to violence, rape, and the El Mozote massacre.

In the 1990’s, gangs that originated in the United States by Salvadoran immigrants, spread down to Central America, initiating a gang-controlled region. The country has never recovered and its people find a way out by immigrating north. But it is also necessary to highlight that El Salvador is not the only Central American country with these dangerous conditions and to survive, many have to flee.

It is time for the United States to take responsibility for its actions. Decades of U.S. foreign policy that devastates local economies and destabilizes governments is at the root of the causes of migrations. The United States must begin helping the people it has directly affected. Including the 270,000 Salvadoran TPS holders that will lose status if TPS is terminated. This includes people like Manuel who have deep roots in the United States and cannot imagine a life outside of it. Not because he doesn’t love his country, but because he understands that returning to a gang and violent-plagued country will make it extremely difficult for his family to thrive in peace.

He knows this is what his family deserves, they are people trying to survive and build a prosperous life.