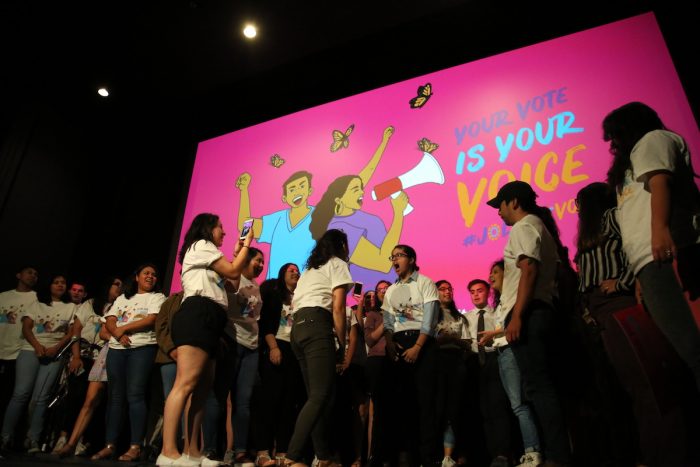 Some of the Jolt members on April 29, 2018 in Austin (Photo courtesy of Ashley Nava)

“From supporting access to health care for all Texans to committing to comprehensive immigration reform that allows our families to live free from the fear of separation, these candidates have shown their commitment to improving the lives of Latinos,” said Cristina Tzintzun, who serves as Jolt’s founder and executive director in a press release following the conclusion of the #JoltTheVote Town Hall.

Colombia native Daniela Rojas, a Jolt youth organizer and member of the University of Texas at Austin Jolt student chapter, helped recruit Latino students from across Texas to the event. The DACA recipient said she gave a presentation at the town hall on how to build and recruit membership for student chapters.

Like many Latinos, she was devastated when President Donald Trump was elected to office. Then, Senate Bill 4 (SB 4), which requires local government entities and law enforcement officials to comply with federal immigration laws, passed in Texas.

“I didn’t know how but I knew I had to be involved somewhere and somehow,” Rojas said. She began volunteering at Jolt and quickly found a support system of like-minded individuals.

“The people I’ve met are really passionate about turning out the Latina vote and getting more Latino political power in Texas,” she said. “I’ve found a way to have my voice heard at a time when this administration is trying to undermine the community.”

Rojas hopes that Latino youth who attended the town hall will realize the power they hold in their vote and take it a step further by becoming politically active.

“We are becoming the majority in Texas and in the country. That’s not what’s being represented in our leadership. We need people representing us and working for our needs,” Rojas said.

Emily Pinal, president of the Jolt student chapter at the University of Texas at Tyler, hopes to work in immigration or human rights, and maybe one day run for political office.

Like many young Latinos, she is the daughter of immigrants and passionately embraces her Latino heritage. She worked to educate her conservative community in Tyler on the plight and contributions of immigrants before she found Jolt. Her mother was deported to Mexico when she was in the fifth grade, which set her on a mission to increase the Latino vote and Latino participation in democracy.

She questioned White on his immigration plans during the town hall.

Town Hall With a Purpose

That question may have been the deciding factor in Jolt’s endorsement of White versus Valdez, a Democratic Latina lesbian, in the May 22 runoff for the Democratic nomination for governor. Valdez avoided going into detail about her Dallas county record on immigration citing ongoing lawsuits, but, said the state government must enforce federal policy. She said she opposed SB 4 when most Texas leadership supported it.

White agreed on state’s limitations in acting on its own behalf when it comes to immigration, but, said the governor’s office can show its public support for the immigrant community. For his part, White was questioned about his ownership of border security company, Geovex Security, but defended the technology, stating that it can detect if a person is a victim of human trafficking or may be dying of heat exhaustion, for example.

“We want a smart border not a fear-mongering border,” he said.

Marco Mejia, the lone male Jolt student chapter leader (University of Texas at El Paso), is only in his first year of college, but is already advocating for increased participation of Latino youth in the political process. He believes women of color and the LGBT community have taken charge and fought for progress, but they need more support from their male counterparts.

“I understand some Latino males believe in machismo and I don’t think that’s healthy. I think we need to be politically engaged and make sure we’re making our voices heard,” he said.

He recalls a conversation with his father about the importance of voting. Mejia reminder his father there was a time he couldn’t vote and a time when Mejia’s mother could’ve been deported. 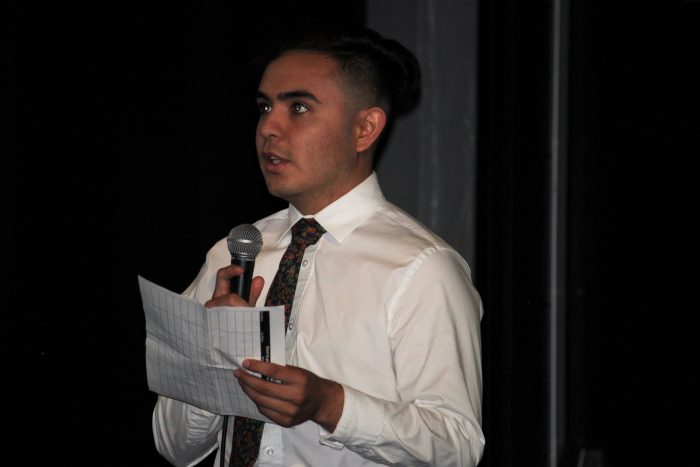 “The reason I’m politically active is I don’t want what happened to my generation to happen again. I think I really want this to be the last time I have to come up on a stage and say, ‘We need to stop terrorizing Latino communities,’” said the Dallas-Fort Worth native with South American roots.

Candidates were also asked about their plans for accessible and affordable healthcare, quality education and combating the school-to-prison pipeline that significantly affects black and brown men, Hurricane Harvey recovery efforts, lowering student debt and plans for DACA recipients and Dreamers.

O’Rourke said he will work to move the conversation away from protecting DACA recipients to offering them a pathway to citizenship.

“And not at the price of their parents or at the cost of a wall or ending immigration, whether you call it chain migration or family migration or just America, not ending it in order to do that,” he said.

Only the First Step

Jolt leadership said the town hall is the first step toward ensuring the Latino community gets the dignity and respect it deserve by changing Texas. That change comes from increased voting and higher numbers of Latinos running and being elected to office.

Voter turnout for Hispanics has been significantly lower than other groups, with only 48 percent of Latino eligible voters casting a ballot in 2012. But Latinos broke its voting record totaling 11.2 million that year.

According to a Jolt press release, Trump carried Texas by 9 points in 2016, compared to 13 points in Ohio. The opportunity for change is viable in a state where 1 in 3 voters is Latino, the press release said.

Jolt was founded in 2016 to mobilize Latino millennial voters and has already pushed thousands of people to action and established high school and college chapters across the state.

After learning that she did not get an endorsement from Jolt Texas, Valdez issued the following statement to the press:

I know the distrust and conflict between law enforcement officials and the communities they serve, because I lived it. It troubles me every day.

When I first entered law enforcement, my father was angry. He told me I would become one of “them”. Someone who thought they were better than the community they served. Someone who cruelly wielded power over others. You see my father and my brothers were beat by local law enforcement. Later in life, I was proud to show my father that I stayed true to who I was. I was tough, but compassionate as a law enforcement official.

This weekend, I fell short. A young woman asked me a question at a forum over the weekend regarding my track record, and she did not get the answer she deserved. I am sorry and I understand why people are disappointed.

Standing up for immigrant communities has been a staple of my life. I am the daughter of migrant workers, and I have experienced first hand the cruel and inhumane treatment that so many immigrants too often experience in our country. I have lived it, and it is my goal to make sure that young Texans don’t face that same treatment I witnessed years ago.

We have a broken immigration system and a criminal justice system that too often results in the immigrant/vulnerable communities being used as bargaining chips. Federal and state officials are pressuring local law enforcement to follow policies that rip families apart. Local law enforcement is often torn between repairing trust with communities they serve and jeopardizing public safety funding that state and federal officials hold hostage to get their way. That’s not how government should work.

I have remained steadfast in my commitment on the need for immigration reform and building trust in the immigrant community. I had a high-profile disagreement with Governor Abbott on this issue. I went down to Austin several times during the last session to testify against the discriminatory SB 4 and similar legislation in previous sessions. Greg Abbott directly threatened me and Dallas because he viewed me to be a trendsetter on this specific issue.

Communities and local law enforcement officials need partners in state and federal government, not threats and ultimatums. Ultimately our efforts in speaking out against SB 4 weren’t enough.

While I was Sheriff of Dallas County, I complied with detainers or else we could have risked funding for a range of resources, including drug courts, juvenile justice programs, and body cameras. I didn’t have the ability to change federal or state policy and Governor Abbott got his way.

I wish we could have done more, and that is why I am such an outspoken advocate for comprehensive immigration reform with a pathway to citizenship. It is why I spoke out forcefully against Governor Abbott’s fear-based policies that attack our immigrant communities. I have stood side-by-side with immigrant communities and fought against cruel and shameful policies. I have done what I believed to be possible. I have been fighting for years, and I am not stopping now.

As Sheriff, I enacted policies to ease detentions for minor offenses, helped push for a practice that would allow law enforcement to assess ICE holds, rejected having our officers be delegated immigration authorities via the 287(g) program and I supported Dallas’ “Welcoming City” resolution to create a more humane system of enforcement, affirming the county’s stance that undocumented residents are “integral members of our community” and encouraging local law enforcement to “end nonessential collaborations with ICE.” During my tenure, I also sought to address the mistrust between law enforcement and the communities they serve to protect. Dallas County was among the first to implement community outreach efforts, which served to make our policing methods more collaborative and in harmony with local stakeholders.

As governor, I will continue to be on the front lines of fighting for immigrant communities and against cruel policies like SB4 – a policy based on fear that only serves to tear our communities apart. I will strive for a Texas that cherishes the diverse heritage of our people and champions equal rights for all.

In response to Valdez’s statement, Jolt Texas issued this statement:

“We appreciate Lupe Valdez’ statement, but there are still many questions that need to be answered about the policies that she implemented as Dallas County Sheriff. The policies that Valdez adopted allowed ICE to have access to jails she oversaw, and led to the deportation and separation of immigrant families across Dallas. We think that one of the best ways for her to address all outstanding questions is by debating her opponent Andrew White. Texans deserve to hear from both of them.”

Karla Quiñones is a member of Jolt’s candidate endorsement committee. The committee is comprised of student leaders from across Texas.