New data published Monday by Syracuse University’s Transactional Records Access Clearinghouse (TRAC) immigration team showed that use of U.S. Immigration and Enforcement (ICE) detainers in 2017 by the Trump administration has increased since 2015-2016, but were nowhere near the levels of the Obama administration during 2012–2013.

According to TRAC, “While ICE detainer usage is up since the FY 2015-2016 period when ICE’s Priority Enforcement Program (PEP) was in place, ICE’s current use of detainers is well below the levels existing during the Secure Communities era under President Obama. On a fiscal year basis, for example, FY 2017 detainer usage was 48 percent lower than five years ago. Table 1 compares the number of detainers prepared each fiscal year, from FY 2012 through FY 2017.”

Detainers are a tool used by ICE when local, state and federal law enforcement agencies have unauthorized individuals in custody, with that hope that these agencies turn over the individuals to ICE so deportation proceedings could begin. The 2017 data is somewhat similar to 2014, but much lower that 2012 and 2013: 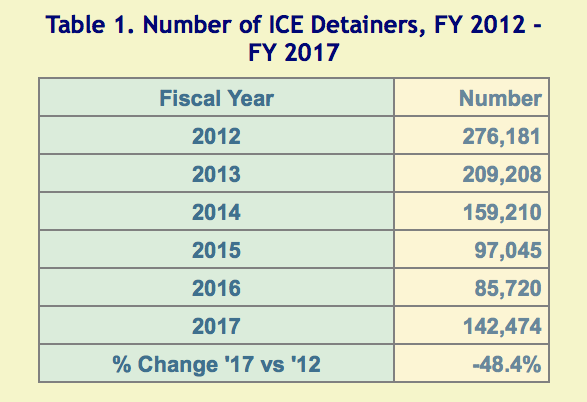 Nonetheless, the reasons why the detainers are so law can be complicated. TRAC states that ICE is not being up front with its data, and is one of the reasons why it filed a suit last year so that ICE disclose more information. As of right now, ICE claims that it doesn’t have to disclose more information about declined detainers and why there were declines.

Despite this lack of information, TRAC still concluded that “the rate of [detainer] refusals during the March 2017–November 2017 period was up 32.1 percent over the same nine month period in 2016. However, the recorded rate of ICE refusals remains quite low. Only 5.3 percent of detainers ICE prepared are recorded by the agency as being refused by the LEA while the rate in 2016 was a refusal rate of just 4.0 percent.”

For more about this new data and the TRAC analysis, go here.