UPDATE, MAY 22: It took him one week to apologize.

Here’s the latest example of of white man anger, this time from midtown Manhattan. According to a video posted Tuesday afternoon on Facebook by Eduardo Suazo, an unidentified dude lost it. The reason? Employees serving lunch were talking in Spanish to customers who were speaking to the employees in Spanish. Which, last time we checked, happens EVERYWHERE in Manhattan, it seems. Here’s the video:

This is a quick transcript of what transpired:

WHITE DUDE: …your staff are speaking Spanish to customers, when they should be speaking English.
EMPLOYEE: Sometimes they do…
WHITE DUDE: Every person I listened to. He spoke it. He spoke it. She’s speaking it. It’s America.
VOICE 1: It is America.
VOICE 2: That’s fucked up.
VOICE 1: He’s very ignorant, and he shouldn’t be allowed…
WHITE DUDE: So I will be following up, and my guess is, they’re not documented. So my next call is to ICE to have each one of them kicked out of my country. If they have the balls to come here and live off of my money. I pay for their welfare. I pay for their ability to be here. The least they can do, they least they can do is speak English…. If you intend on running a place in midtown Manhattan, your staff should be speaking English, not Spanish.
VOICE 1: Because of people like you, our nation is fucked up…
WHITE DUDE: Honey, I’m calling ICE..
VOICE 1: Call ICE.
WHITE DUDE: Maybe you shouldn’t eat that sandwich today. Take a break from the food.
VOICE 1: Maybe you should get hit by a car, you piece of shit.

So my wife and her best friend Just experience what America is becoming !

They where on there lunch time and ordering there food and just because they where speaking in Spanish to the waiter this asshole jumps in and started to call the waiter and my wife and her best friend all types of names and threatened to call I.C.E on them and the employees !!!!

I wish I was there because clearly this peace of shit need someone to punch him in his mouth !!

What a big man talking down to couple of women and a helpless employee. I wish someone tells me I can’t speak in my native language ! First of all they wasn’t talking to you !! Asshole !

My country !! Haha ?
I love the way people are just throwing that world around lately !!
If you love this country this much ! Why don’t you put on uniform and protect it !!

So please stop !! Because in the end you need them ! But what you need to do is stop trying to control us ! Slavery stopped a long time ago !!

UPDATE, May 16 (hours after LR did a writeup about the video): Looks like Shaun King is using Twitter to try and identify who this guy is. And he has tweeted a name.

Please let Attorney Aaron M. Schlossberg of Midtown Manhattan know I’m trying to get in touch with him. I have a few questions.

If you reach him, ask how often he eats at the Fresh Kitchen next door to his office and if he has a problem with people speaking Spanish there. pic.twitter.com/8pgQ6wZNzi

Also, Gothamist spoke to a witness who was there during the incident. According to Gothamist, the man in the video “seemed like a normal, pretty well off caucasian guy.”

Our witness says that the man was promptly thrown out of the restaurant, while the woman was permitted to stay. “[They] let the lady stay but had the man go, because he was causing the trouble, screaming at people,” the witness told Gothamist.

“I don’t know what to say,” the witness added. “People are taught not to be bystanders, but it’s hard to get involved. This guy was really, really angry.”

The irony of all this? The dude’s law firm says it offers services in (wait for it) Spanish.

Hours after Latino Rebels first published news of this video on Monday, details about the lawyer in the video are starting to surface. And the Facebook reviews are coming in. In summary, they aren’t good.

The Manhattan bigot’s Twitter name is @ASchlossbergLaw in case you want to say hello to him. pic.twitter.com/2EsQwUOO01

Hey guys, you know that disgusting racist who screamed at and threatened the women speaking Spanish at a restaurant in Manhattan? He is a @NYSB lawyer by the name of Aaron M. Schlossberg. You can find him here, @ASchlossbergLaw. pic.twitter.com/QL6VdBj7oE

Anyone talking about how it’s unfair to name and shame @ASchlossbergLaw can have every seat in town.

If you name and shame one person, it may make another person think twice before threatening to call ICE on people.

People aren’t safe under this administration.

May 17 UPDATE: Leave it to the Daily News for capturing the moment on its Thursday front page. 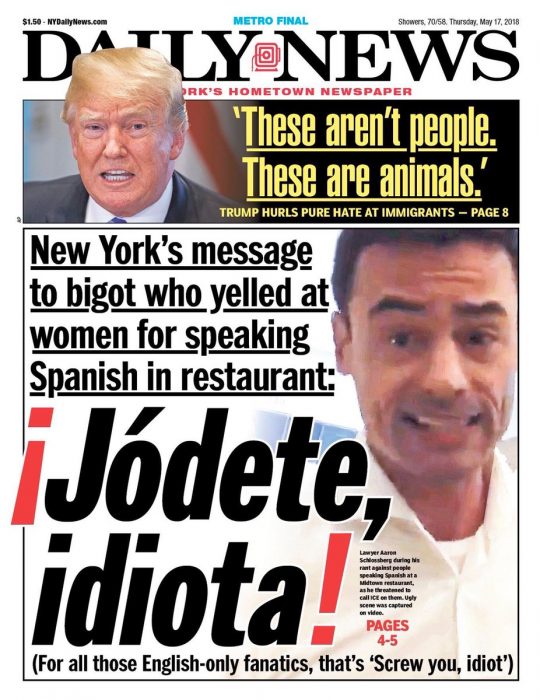 In addition, King is tweeting Thursday morning about new videos that show Schlossberg in all his neo-nativist POV:

“What country are you from?”

“You’re an ugly fucking foreigner, so fuck you.”

-Words of a licensed, practicing attorney, Aaron Schlossberg, to a complete stranger on the streets of Manhattan in 2016

He should be disbarred. https://t.co/K4FnzY1tgC

This is the unedited video from October of 2016 of Manhattan Attorney Aaron Schlossberg assaulting, then calling a complete stranger “an ugly fucking foreigner” on the sidewalk on 5th Avenue.

The man he’s talking to, @morewillie, is a white man from Massachusetts.

And here is New York Post video from Thursday, which explains itself:

Ironically, this is part of Schlossberg’s bio:

Mr. Schlossberg is a published author and a seasoned presenter. He is fluent in Spanish, conversational in French and has basic knowledge of Mandarin Chinese and Hebrew.