National Strike Paralyzes Nicaragua Ahead of New Round of Talks 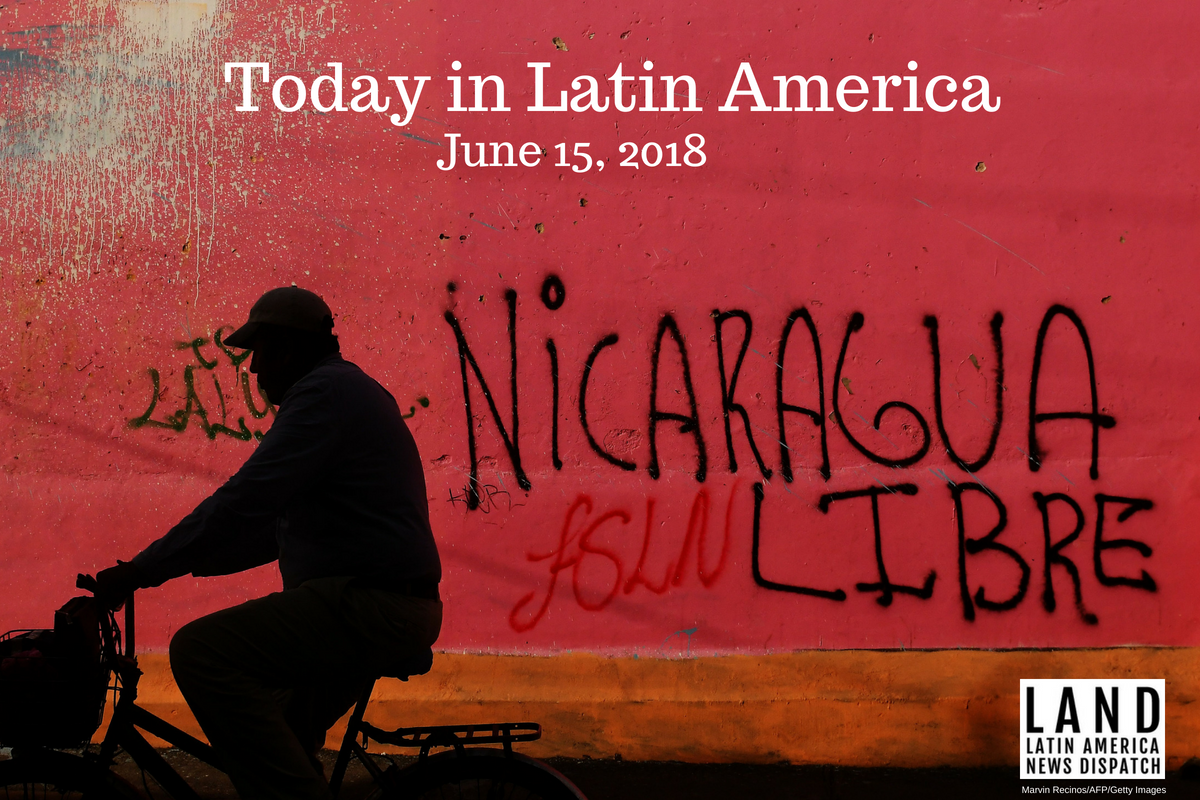 View of the headquarters of the FSLN, which were occupied and looted by a mob of protesters in Diriamba, 40 km from Managua, on June 14, 2018. (Photo by Marvin Recinos/AFP/Getty Images)

NICARAGUA: A 24-hour national strike that began Thursday at midnight and ended last night paralyzed the streets of Nicaragua. It was organized by the opposition “Civic Alliance” and included all economic activities “except those related to the preservation of life and the coverage of basic services for the population,” announced the National Alliance for Justice and Democracy. Schools and universities have been closed for weeks and the Nicaraguan Center for Human Rights raised the death toll to 161 but other human rights organizations still have a lower figure of 148 deaths.

Today, the Roman Catholic Episcopal Conference of Nicaragua will meet with representatives of Ortega’s government and publicly unveil both its proposal, which is said to include a mention of democratizing the country, and Ortega’s answer.

The Inter-American Commission on Human Rights issued a statement on Wednesday condemning “the excessive use of state force” and attacks on protesters by pro-government paramilitary forces. Yesterday, the Ministry of Foreign Affairs of Nicaragua called the IACHR biased.

UNITED STATES: U.S. House Republicans are reviewing a draft immigration bill that includes a citizenship path for “Dreamers,” undocumented young immigrants who entered the United States as children. The wide-reaching immigration bill includes $25 billion for a border wall with Mexico, strengthens enforcement of immigration laws, ends the diversity visa lottery for immigrants from underrepresented countries and limits visas for extended family members shifting towards a merit-based immigration system. But allows the “Dreamers” to apply for legal status for six years and eventually for citizenship.

MEXICO: The National Electoral Institute will allow voters to write the nickname, initials or campaign slogan of a candidate anywhere on the ballot, just as long as the intention of the voter is made clear. Before, Mexicans could only mark an X over the name of their candidate or write in a name inside a special box, but not use the whole ballot. Most parties were against the measure claiming it might lead to confusion as Mexicans will vote in the 1 July elections not only for president but also for a new Congress, nine governors and hundreds of mayors.

CUBA: The U.S. State Department asked senior Cuban officials for their country to solve the mystery of the illnesses suffered by two dozen U.S. diplomats in Havana during a meeting yesterday in Washington. Cuba again denied any involvement or knowledge in the cause of the illnesses and objected to the U.S. reiterated use of the word “attacks,” saying neither U.S. nor Cuban experts have been able to determine the cause of the symptoms and therefore whether it is intentional or not. Carlos Fernandez de Cossio, the top Cuban official present, said the Trump administration is using the incidents as an excuse to reverse the steps taken by Obama to thaw the relationship between the two countries.

CAYMAN ISALANDS: The British-appointed governor of the Cayman Islands, Anwar Choudhury, was recalled to London by the Foreign Office pending an investigation into a number of undefined complaints against him. The Cayman Islands’ elected premier, Alden McLaughlin, said it was “unforeseen and unfortunate” but didn’t give further explanation. Many of Britain’s Overseas territories are in the middle of a tense discussion with London over new tax transparency legislation.

HONDURAS: Federal prosecutors and an Organization of American States-backed mission on corruption have denounced a scheme that diverted funds from the agriculture department and channeled them through foundations to political parties, including the 2013 campaign of President Juan Orlando Hernández (whose reelection last year was marred by controversy). Allegedly $11.7 million in government funds were diverted. Investigators asked the Supreme Court to issue arrest warrants for 38 politicians, officials and private citizens.

PANAMA: Former president Ricardo Martinelli has been returned to jail after a three-day hospitalization for hyper-tension after being extradited from Florida on charges of political espionage and corruption.

VENEZUELA: President Nicolás Maduro reshuffled his cabinet for what he called for a “new start” to his second term. Executive Vice President Tareck El Aissami was demoted to the economic vice presidency and named minister of industries and national production and Delcy Rodríguez, head of the Plenipotentiary National Constitutional Assembly, was named executive vice president. Another ten less important changes were made.

VENEZUELA: The Venezuelan Supreme Court rejected a challenge to the election results presented by former presidential candidate Henri Falcon, who got 22 percent of the votes on May 20. Falcon’s legal team had argued that President Nicolás Maduro and his representatives offered cash incentives to voters and used state media to promote reelection, but on Wednesday the court ruled the appeal inadmissible because it did not “do the narration of the facts in relation to the intended purpose” or “provide any evidence.”

ARGENTINA: Hundreds of workers, including truck drivers and teachers, got together in the Plaza de Mayo of Buenos Aires to protest against President Mauricio Macri’s deal with the International Monetary Fund. Argentine Unions are preparing for a general strike on June 25th.

BRAZIL: The Brazilian police arrested yesterday 61 persons in 14 different states who are allegedly part of Brazil’s biggest and most powerful organized crime gang, the First Capital Command. The group was founded inside the Taubate Penitentiary of São Paulo in 1993 to pressure authorities to improve prison conditions.