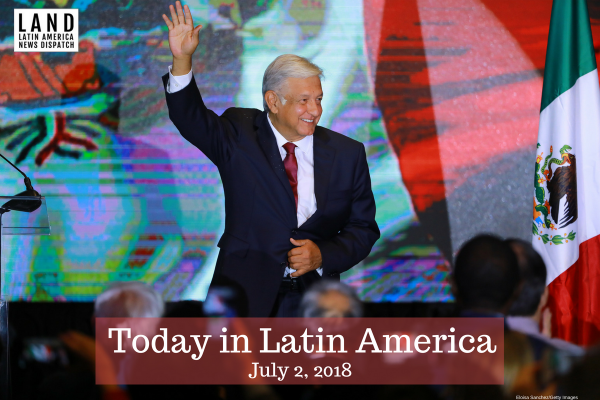 Andres Manuel López Obrador waves before leaving to celebrate after giving a speech for his virtual victory for the presidency of Mexico on July 1, 2018 in Mexico City, Mexico. (Photo by Eloisa Sanchez/Getty Images)

MEXICO: Leftist candidate Andrés Manuel López Obrador won yesterday Mexico’s presidency after he moderated his most radical proposals in his third bid for his country’s leadership. An official quick count released by electoral authorities late last night gave López Obrador between 53 and 53.8 percent of the votes, conservative Ricardo Anaya of a right-left coalition won 22 percent of the votes and the ruling party’s candidate José Antonio Meade only 16 percent. Such a large margin hadn’t been seen in Mexican elections in 30 years. Exit polling by Consulta Mitofsky shows that López Obrador’s party Morena and its allies also won at least four of the eight governor races on the ballot plus the head of Mexico City and between 56 and 70 seats in the 128-member Senate and between 256 and 291 spots in the 500-seat lower house.

After being elected mayor of Mexico City in 2000, López Obrador ran for president in 2006 and alleged electoral fraud when he lost by just 0.56 percent to conservative Felipe Calderón.  López Obrador lost again in 2012 against current President Enrique Peña Nieto. During his political career he has constantly criticized the “power mafia” that has ruled Mexico for decades, but later in this campaign, he promised good relations with the business sector and a full-on attack on corruption. He has promised to expand social welfare programs with the money saved when eradicating corruption and to respect the autonomy of the Bank of Mexico and maintain financial and fiscal discipline.

During the massive election day, where an all-new Congress, state legislatures, eight governorships, the head of government for Mexico City and nearly 1,600 mayors were to be elected, violence and reports of corruption marred the mood. The Attorney General’s Office for Electoral Crimes said it had received 1,106 complaints by mid-afternoon. Four people were murdered during the election day: a militant with the Worker’s Party in Michoacán, a militant with the PRI in Puebla, a militant with Morena in Chiapas and a woman at a polling station in Tabasco. Also, a polling station was set on fire in Michoacán; an indigenous town in Chiapas suspended voting after an armed group opened fire against a station injuring 15; and gangs in the resort town of Acapulco, in Guerrero, hung a banner saying “The vote is free and secret” and threatened to kill whoever influenced votes for any party.

UNITED STATES: Hundreds of thousands staged over 700 different protests on Saturday against the U.S. government’s policy of separating undocumented families that cross the border illegally. Although President Donald Trump’s administration had reversed the policy last week, most of the more than 2,000 children that were taken from their parents have not been reunited. The biggest march was in Washington D.C., where an estimated 30,000 persons gathered across from the White House.

BAHAMAS: The British Council was accused of censorship after it decided to distance itself from a series of exhibitions at the National Art Gallery of the Bahamas called Difficult Conversations, which deal with the U.K.’s involvement in the slave trade in the Caribbean. Although the cultural diplomacy arm of the British Foreign Office only said the decision was made because the material was “too political,” the issue seems to have been with an essay that talked about local concerns about the growth of Chinese influence in the Bahamas. It is not the first time the British Council has been accused of censorship for trying to avoid offending the Chinese government.

PUERTO RICO: On Friday, legislators in the U.S. territory refused to alter labor laws allowing private employers to dismiss workers without having to prove just cause and failed to submit a budget that complied with the fiscal plan approved by the federal control board by a June 30 deadline. So on Sunday, the board approved its own budget plan for Puerto Rico imposing austerity measures that many expect will lead to a court battle.

PUERTO RICO: A judge in Massachusetts ordered to extend vouchers for temporary hotel housing for nearly 1,700 Puerto Rican hurricane evacuees. The order given out on Saturday extended the expiration date on the vouchers from Sunday at midnight to Tuesday at midnight, but the civil rights group behind the lawsuit that led to the order is pushing for a six-month extension.

NICARAGUA: Unidentified gunmen opened fire at the thousands of anti-government protesters who were marching on Saturday through the streets of Managua to honor the lives of the almost 300 victims of the protests that began on April 18. One person died and nine were injured, one of which is in critical condition. A smaller demonstration yesterday was also attacked resulting in one more death.

COLOMBIA: UNESCO’s World Heritage Committee added Colombia’s Chiribiquete National Park to its World Heritage List. The park is located in the north-west Colombian Amazon and is the largest protected area in the country. It was inscribed by UNESCO as a mixed site, both natural and cultural, for its tepuis, table-top mountains similar to the ones in Venezuela that inspired Disney and Pixar’s movie Up, and the over 75,000 paintings, as much as 20,000 years old, that cover the bases of the tepuis.

BRAZIL: Defenestrated former president Dilma Rousseff announced last week that she will be running for a Senate seat representing the state of Minas Gerais. Rousseff, who belongs to Luiz Inácio Lula da Silva’s Worker’s Party, was removed from office in August 2016 for improperly using public bank reserves to paper over budget shortfalls in what she considered a coup by her vice president, the now-president Michel Temer.

BRAZIL: Multinational mining company BHP said on Friday it had agreed to fund a total of $211 million in financial support for a foundation created to help the victims of the Samarco dam disaster, which killed 19 people when it burst in 2015. The announcement comes after Samarco and its parent companies Vale SA and BHP Billiton Ltd signed a deal with Brazilian authorities settling a $5.2 billion lawsuit.