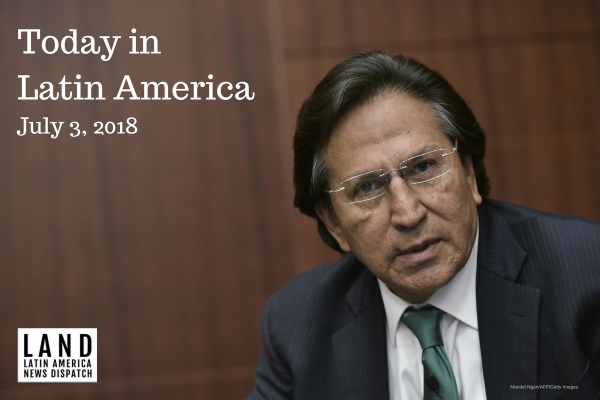 Former President of Peru Alejandro Toledo speaks during a discussion on Venezuela and the OAS at The Center for Strategic and International Studies (CSIS) on June 17, 2016 in Washington, DC. (Photo by Mandel Ngan/AFP/Getty Images)

PERU: A high court rejected a petition by former president Alejandro Toledo to declare invalid a request to the United States for his extradition. Toledo has been living in California on the run from Peruvian authorities for almost a year and a half, but U.S. authorities have not answered to the extradition request, therefore, the international arrest warrant against him is still void in U.S. territory. He is accused of having received a $20 million bribe payment from Brazilian firm Odebrecht.

Toledo’s defense argued that the speed with which the request was processed showed there was a political persecution against him led by now ousted President Pedro Pablo Kuczynski and his government, but the judge rejected the petition outright considering Toledo was never at a disadvantage. Kuczynski’s resignation in March in the face of an impeachment process was also a result of the Odebrecht scandal, which has affected most ofLatinn America but has reached higher echelons of power in Peru.

MEXICO-U.S.: U.S. President Donald Trump and Mexican President-Elect Andrés Manuel López Obrador talked yesterday on the phone for half an hour. Both presidents agreed to begin their relationship on a positive note, López Obrador said “We are going to extend our frank hand to seek a relation of friendship, I repeat, of cooperation with the United States,” and Trump said “I think the relationship will be a very good one.” About 80,000 people gathered yesterday morning in Mexico City to celebrate López Obrador’s victory.

MEXICO: The Tehuacán-Cuicatlán valley in the state of Puebla, in south-east Mexico, was added yesterday to UNESCO’s World Heritage List as a mixed cultural and natural site. The valley is the arid or semi-arid zone with the richest biodiversity in all of North America and where the densest forests of columnar cacti in the world is located. The valley also has the archaeological remains of the oldest water management system in the continent.

PUERTO RICO: Yesterday, Gov. Ricardo Rosselló refused the austerity budget that a federal control board had approved for Puerto Rico and signed into law the version of the fiscal plan by the archipelago’s own legislators instead. Roselló argued the board’s budget is not in Puerto Rico’s best interest but recognized his insubordination was “a symbolic gesture.” Natalie Jaresko, the board’s executive director, said “We will do everything within our means…to enforce the budget. Courts are the first thing that comes to mind.”

NICARAGUA: Two top representatives of the Inter-American Commission on Human Rights arrived in Nicaragua on Monday for a stay of at least six months. The human rights body’s executive secretary, Paulo Abrao, and the representative for Nicaragua, Antonia Urrejola, said they creating an International Group of Independent Experts. Their first visit to the country resulted in a report on the situation that was rejected by the government of Daniel Ortega.

COLOMBIA: In the last week, four community and peasant leaders have been killed in Colombia. Councilman for the Green Alliance Party, Gabriel Correa, was killed yesterday in the early morning in the town of Buenos Aires in the south-western region of Cauca. On Friday, Iván Lázaro was murdered in Tierralta, in the northern province of Córdoba, and hundreds protested against his death wearing white shirts on Sunday. James Alberto Hidrobo, a former councilman and leader of a government program to substitute coca crops, was killed on Thursday in Patía, Cauca. And a week ago on Monday, peasant leader José Abraham García was killed in Ituango, Antioquia, where a dam that almost burst last month is being built.

BRAZIL: President Michel Temer’s approval rating fell to a new low record of only 4 percent in the second quarter of 2018, according to a survey by the firm Ibope and the National Industry Confederation. In the previous quarter his approval had been one point higher. Disapproval of Temer’s administration rose from 72 percent to 79 percent. Meanwhile, the Federal Police of Brazil announced on Friday that it has evidence that incriminates Temer with a corruption scheme. Temer signed a decree apparently to benefit the port sector in exchange for favors from the engineering firm Argeplan which has dealings in the port sector. Argeplan belongs to Temer’s personal friend and former colonel of São Paulo’s military police João Batista Lima and according to the police report the whole firm was put at the service of the president’s private and public needs. Lima was arrested in March for allegedly bribing Temer in exchange for the port decree.