Seven People Murdered in Southwestern Colombia, Raising Questions About Why They Were Killed 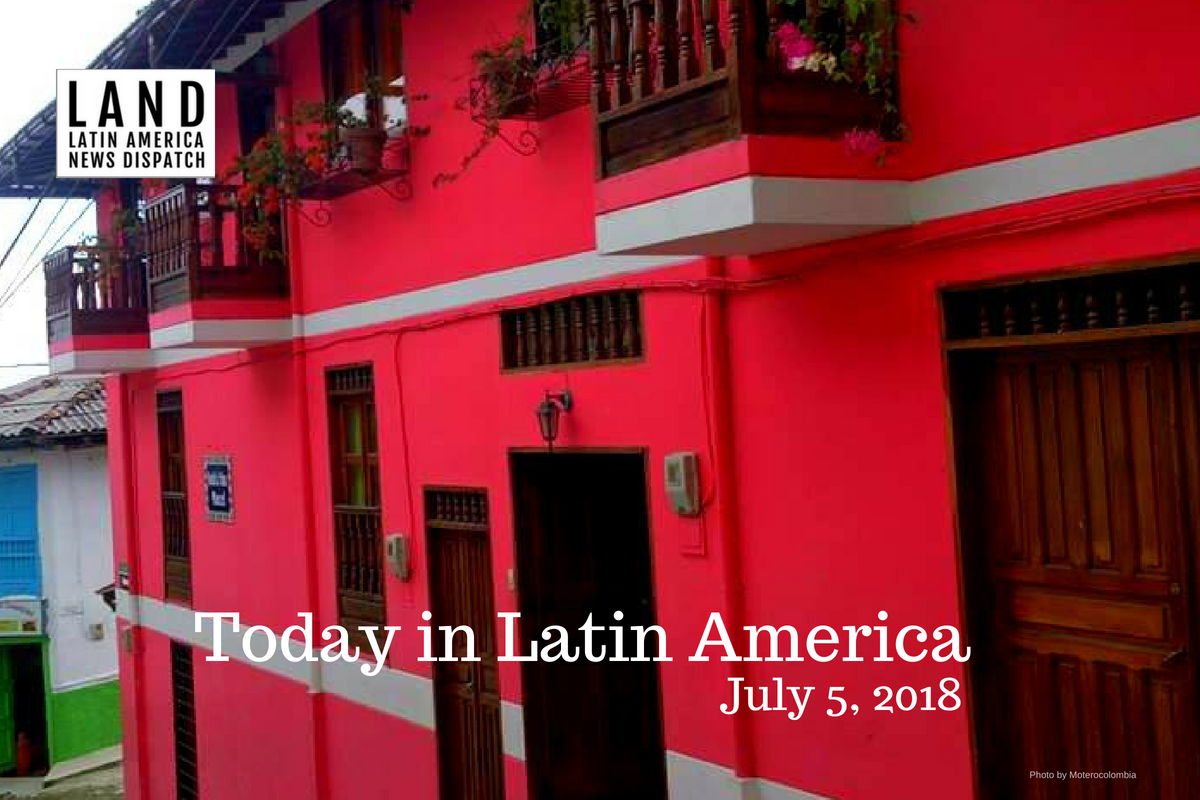 COLOMBIA: The bodies of seven people with signs of torture were found near the village of Argelia, in the southwestern region of Cauca early Monday morning. Local reports say the deceased were were not from the local community and were dumped there by two pickup trucks around 1:30 am. The General Attorney’s Office announced yesterday that six of the seven people had been identified and that two of them were former guerrillas of the FARC and four others had criminal records for illegal possession of weapons.

The area, which used to be under the influence of the FARC, is of strategic interest for drug traffickers because of the coca crops there and because the canyon of the San Juan de Micay River serves as an easy route to transport drugs out to the Pacific Ocean. Initial reports pointed responsibility towards a new group that called itself Popular Commando of Social Cleansing which had put out a menacing pamphlet some days before. Newer reports point towards the ELN rebels, who issued a statement denying their participation in the massacre and calling the Army’s accusations “malicious.” The ELN’s peace delegation restated its determination to continue peace negotiations with the new government of President-elect Iván Duque, who during the campaign said he would only negotiate under a ceasefire. The ELN is also reportedly responsible for a bomb attack yesterday in the Pacific port city of Buenaventura that left eight marine soldiers badly injured, but hasn’t responded to this accusation.

MEXICO: President-elect Andrés Manuel López Obrador met yesterday with businessmen and business chamber leader Juan Pablo Castañón and promised $5 billion for a youth job training program where the government would pay the salaries of apprentices employed by companies. This program, and another $2 billion program that will extend and increase supplementary payments for the elderly, will be the cornerstones of López Obrador’s first year in office.

JAMAICA: The 39th Caribbean Community Heads of Government meeting was inaugurated yesterday in Jamaica. For the first time in a decade, all 15 heads of state of CARICOM countries are expected to attend, including recently elected Cuban president Miguel Díaz-Canel, as well as other heads of state like Chilean president Sebastián Piñera. The meeting will last until tomorrow and the main issued that will be discussed are crime, disaster management and climate change.

PUERTO RICO: Governor Ricardo Rosselló convened the archipelago’s Senate for a special session on Tuesday to try to pass a bill aimed at resolving budget differences with the federal control board to avoid the issue going to court but didn’t succeed. The bill, which was rejected by 18 of the 22 senators, eliminated worker’s protections against unjust dismissals and the board had promised concessions keeping vacation and sick days and not eliminating Christmas bonuses in exchange for its approval.

PUERTO RICO: A judge in Massachusetts granted an extension blocking for three more weeks the evictions of the evacuees displaced by Hurricane Maria living in hotels across the U.S. The Transitional Sheltering Assistance Program was supposed to end last Sunday but a different judge had extended it for three days. The Federal Emergency Management Agency said there were about 1,700 families living in hotels until Saturday but only about 950 remained on Tuesday.

NICARAGUA: Thousands took to the streets of Managua yesterday in a rare day of peaceful demonstrations. There were separate events in support and in opposition to the government of Daniel Ortega. In the morning, the opposition organized a human chain that extended for almost two miles, and in the afternoon, the government called for a “Walk for Peace” attended by thousands of people. Also yesterday, the Nicaraguan Pro-Human Rights Association published a new report raising the death toll from the protests to 309. And the General Attorney’s Office accused 23 antigovernment protestors in the northern cities of Sébaco and Tipitapa of terrorism.

VENEZUELA: President Nicolás Maduro asked the armed forces to stay alert yesterday after reports surfaced that during August and September of last year U.S. President Donald Trump had pressed aides and talked to Latin American presidents on several occasions about invading Venezuela. In addition, the United Nations Human Rights Council issued a declaration supported by 53 countries, condemning the humanitarian situation and the violations of human rights registered by the Office of the High Commissioner for Human Rights. Cuba, Bolivia and Egypt supported Venezuela and criticized procedural aspects of the vote and the politicization of the Council.

CHILE: A court convicted eight retired soldiers on Tuesday for the kidnap and murder of famous Chilean folk singer Víctor Jara and a top government official in 1973, days after the military coup against socialist President Salvador Allende. Jara was arrested the day after the coup, led by General Augusto Pinochet, and taken with about 5,000 others to the capital’s biggest stadium, which has since been renamed after him. He was interrogated, tortured and killed, and his body was found a few days later with broken hands and riddled with machine gun bullets. The former soldiers were sentenced to 15 years in prison for the murders of Jara and of Allende’s prisons chief Littré Quiroga and to three more years for the kidnappings. A ninth veteran was sentenced to five years as an accessory to the murders.

BRAZIL: The police searched the offices of Dutch health technology company Philips in Brazil and detained two people yesterday as part of an investigation into a corruption scheme to win and inflate contracts to supply medical equipment for the Rio de Janeiro state Health Department. The probe was a part of the larger Car Wash investigation that has shaken the country in recent months.