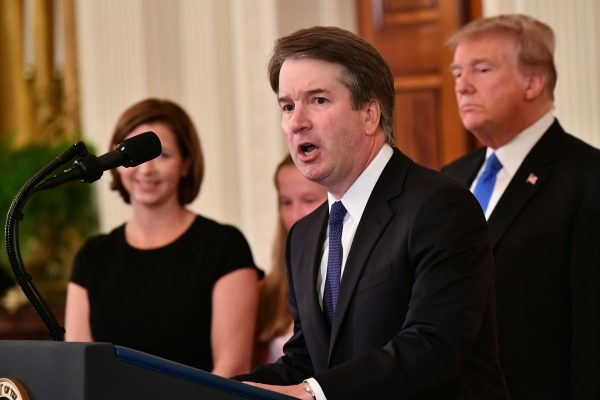 Donald Trump’s nomination of Brett Kavanaugh to the United States Supreme Court has women all over the country in distress. During his election campaign, Trump promised to elect a Supreme Court justice who would overturn the landmark decision of Roe v. Wade, and Kavanaugh’s vote may be the one to do it.

Kavanaugh has neither denied nor confirmed that he would overturn the decision, and has avoided the topic. However, in 2006, Kavanaugh said, “I would follow Roe v. Wade faithfully and fully,” when appointed to the D.C. Circuit’s U.S. Court of Appeals. The likelihood of Kavanaugh sticking to that seems shaky now and many are watching to see if this precedent holds true.

Kavanaugh previously voted against giving an undocumented teen access to abortion in a high profile case. He wrote, along with two other GOP-appointed colleagues: “The Government has permissible interests in favoring fetal life, protecting the best interests of a minor, and refraining from facilitating abortion.”

For women in the U.S., especially for Black and Latina women who suffer the brunt of reproductive issues and oppression, the consequences of this Supreme Court nomination can be deadly. Overturning the Roe v. Wade decision could revoke the legality of abortion. Yet, rescinding the law is more than taking away a woman’s choice, it is taking away her options and violating her fundamental right to privacy.

If the right to abortion is repealed, the power to regulate abortion legislation will go to the states. The leaders in every state will impose their rule of law and uniformity will be non-existent in this case. In some states, the proceedings of Roe will withstand, but in others, restrictive laws will be implemented or abortion will be done away with completely.

The National Latina Institute for Reproductive Health responded to the news in a press release saying, “A Supreme Court justice must protect and uphold the constitutional rights of all people, not a privileged few. With the nomination of Kavanaugh, the balance of the court will almost certainly turn against the legal right to abortion, access to abortion care, and other critical reproductive health care including contraception. For Latinas and women of color, who already face significant barriers to their legal right to abortion, Kavanaugh’s nomination is a pressing threat to our health and safety.”

The History of Roe v. Wade

The right to privacy in accordance with the 14th Amendment is the cornerstone of Roe v. Wade. In 1973 the ruling acknowledged a woman’s right to make personal decisions regarding her pregnancy and maternal health, including the choice to terminate it.

The Texas laws prohibiting abortion were annulled and legalized the medical procedure country-wide. Though, the decision came with implications regarding when a woman could do so depending on how far along she was.

Still, since then, states have tried to weaken the precedent of Roe v. Wade by enacting statutes to contest the legality of abortion. Some of these restrictions include:

Implementing these stipulations became a form of discrimination against women of low-income and impoverished communities. 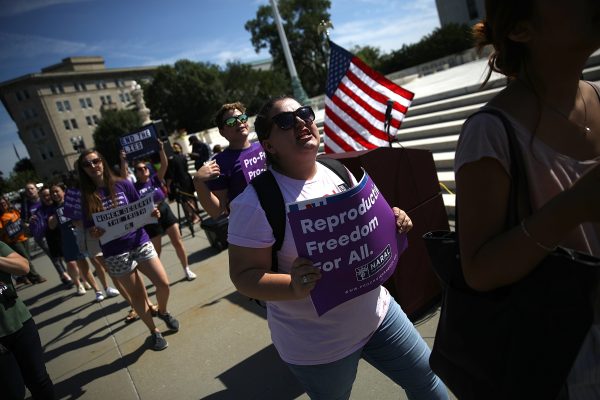 Supporters of women’s rights protest outside the U.S. Supreme Court as the court issues a ruling on a California law related to abortion issues on June 26, 2018 in Washington, DC. (Photo by Win McNamee/Getty Images)

Women who could not afford or have access to the means for an abortion would have to pay for the procedure out of pocket or had to carry the pregnancy to term and struggle afterward. As a result, many of these women resorted to unsafe measures including coat hanger abortions and unhealthy drugs.

Abandoning Roe v. Wade can have perilous consequences for women of color. Research shows that Black and Latina women account for the majority of abortion rates. The rate of abortion is high for women of color, substantially higher than white women, because of systemic discrimination that leads to a lack of quality healthcare and lack of information around healthcare and contraception.

Without safe access to abortion, the number of fatalities will spike too. The staggering numbers show that 56% of pregnancies in Latina women are unintended and for every 10 of those pregnancies, four end in abortion. The teen pregnancy rate for Latinas is over double that of white teens. Studies continuously prove that the reason being is because Latinas’ lack of access to contraception and reproductive care.

The current political climate is showing a disregard for women’s reproductive rights and undoing the justice the 1973 Supreme Court ensured will defy an essential safeguard of women’s rights.

If abortion is made illegal, the government will be forcing women to take matters into their own hands when faced with difficult pregnancies, which can lead down a harmful path.