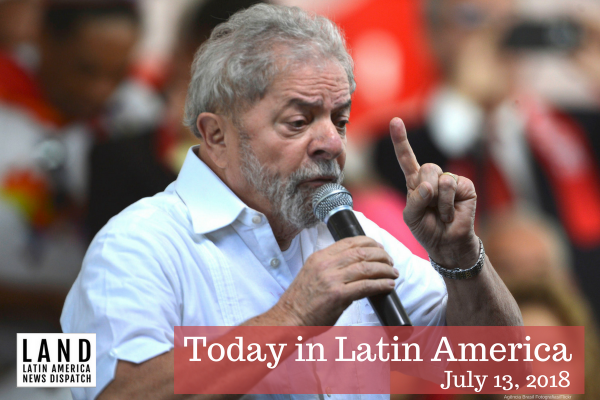 BRAZIL: Former president Luiz Inácio Lula da Silva was acquitted yesterday in one of the seven corruption cases he is facing. He is in prison serving a sentence on another corruption conviction but is the leader in every poll for October’s presidential elections. Lula was accused by Sen. Delcidio do Amaral of asking him to bribe the former international director of Petrobras, Nestor Cervero, to stop him from incriminating Lula in the massive corruption probe known as Car Wash. Do Amaral’s accusation was part of a plea bargain deal that led to his liberation but Cervero, who was convicted of corruption and money laundering, said Lula never asked him for anything. The prosecutors’ office finally asked the judge to acquit Lula of obstruction of justice as the witnesses against him weren’t sufficiently credible and no other supporting evidence was found, Lula’s lawyers said the same reasoning could be applied to the case of which he was convicted last year.

Meanwhile, Judge Laurita Vaz of the Superior Justice Tribunal rejected 143 of the habeas corpus petitions demanding Lula’s liberation that the court received at the beginning of the week.

UNITED STATES: After a court-ordered deadline for reuniting all children under five years old who were separated from their families as a result of the immigration policy had passed on Tuesday, the Trump administration said yesterday that it had reunited all “eligible” children, a total of 57, with their parents. Nearly half of the children under 5 remain in federal custody because of safety concerns, the deportation of their parents and other issues. The court set July 26 as the deadline for reuniting all other children, more than 2,000, with their parents.

MEXICO: A new shopping mall on the south of Mexico City partly collapsed yesterday. People were evacuated in time and major expressway, the Periférico, was also temporarily closed as rubble fell on it, two lanes remained closed the rest of the day causing traffic jams. The Artz Pedregal mall opened in March, although some if it was still under construction, and had already suffered subsoil slides. Mexico city, located where there used to be lakes and swamplands, has notoriously bad subsoil conditions and is also prone to earthquakes.

MEXICO: Gunmen killed three police officers on Wednesday in the municipality of Tezonapa, Veracruz, in an area where three days earlier authorities mounted an operation against fuel thieves. On Tuesday, four people were killed in Coyuca de Benitez, Guerrero, including a 17-year-old boy and an 11-year-old boy. An organized crime group attacked on Monday a team of investigators from the Attorney General’s Office who were delving into forced disappearances in the northern border city of Nuevo Laredo, Tamaulipas, and a shootout ensued when military personnel guarding the team repelled the attack. Four people were wounded and one was killed in the shootout.

HAITI: A spokesman for the International Monetary Fund told reporters yesterday that Haiti should eliminate fuel subsidies gradually to avoid unrest, referring to last weekend’s major protests over the hike in fuel prices that resulted in looting and several deaths. IMF member nations had agreed to provide more direct assistance to Haiti if, among other austerity measures, it eliminated the fuel subsidies that spokesman Gerry Rice said “disproportionately benefit the well-off.” But millions of poor Haitians depend on cheap kerosene to power their stoves and generators as they don’t have access to electricity in their homes.

NICARAGUA: Tens of thousands attended a march yesterday called by the opposition coalition Civic Alliance and by several chambers of commerce to demand the resignation of President Daniel Ortega and his wife and vice president Rosario Murillo. On Wednesday, the Inter-American Commission denounced 264 people have died in the protests, which the Ortega administration refuted, while the Nicaraguan Pro-Human Rights Association said 351 people have died and denounced the existence of at least two mass graves were government supporters have hidden bodies.

COLOMBIA: Three investigators from the General Attorney’s Office were killed on Wednesday by the FARC holdout dissidence of alias Guacho near Colombia’s southern border with Ecuador. The vehicle in which the two explosives experts and a finance expert were travelling was ambushed and set on fire. Alias Guacho, whose real name is Walter Arizala, was a mid-level commander of the FARC who didn’t demobilize with the rest of the organization and became well-known in March when his group kidnapped and killed three Ecuadorean journalists.

COLOMBIA-SPAIN: The European law enforcement agency announced on Wednesday that it broke up two gangs that laundered about $2.9 million of mostly drug money between Colombia and Spain. Police arrested 23 alleged members of the groups, most whom were from Spain, Colombia and Venezuela.

ARGENTINA: While struggling to comply with the demands of the International Monetary Fund to apply austerity measures in the face of massive protests, President Mauricio Macri fulfilled one of his campaign promises by raising the salaries of the armed forces by 20 percent. Since the end of the military dictatorship in 1983, the army, the navy and the air force are forbidden from participating in any issue that doesn’t involve an attack by a foreign country and their salaries had been lowered in relation to those of the other security forces—police, gendarmerie and coast guard. The increase isn’t enough to make up for this year’s inflation or to breach the salary gap with the other forces.