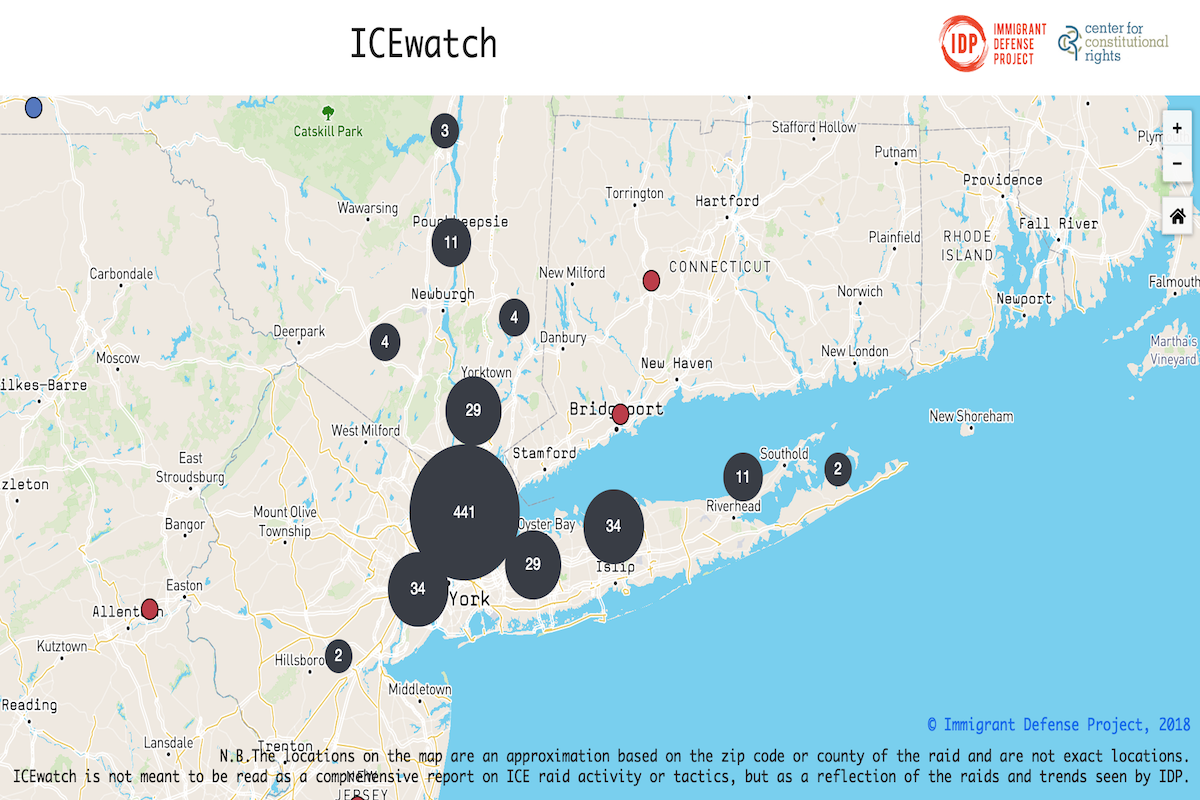 The following media release was shared by the Immigrant Defense Project (IDP):

The Immigrant Defense Project (IDP) today in partnership with the Center for Constitutional Rights launched “ICEwatch,” an interactive map that details ICE’s deceptive and aggressive tactics with summaries of nearly 700 raids, available at raidsmap.immdefense.org. ICEwatch includes raids conducted during the first year and a half of the Trump administration as well as others that have been reported to IDP over the preceding five years. By offering details on ICE practices, ICEwatch aims to shed light on ICE tactics to better equip individuals to exercise their constitutional rights, as well as to highlight the harms associated with the agency’s mass deportation mandate that they fuel through the criminalization of immigrants. Additionally, a supplemental ICE Raids Report highlighting key trends is available here.

“ICE relies on fear-mongering, secrecy, deceit, manipulation, and force to enact its devastating deportation mandate to deport as many people as possible,” said Genia Blaser, IDP Senior Staff Attorney. “By making the reports of their dehumanizing tactics widely available through ICEwatch, we aim to inform the public and community members around the escalation of ‘unshackled’ ICE policing. We also continue to work with allies to challenge the demonization and criminalization that ICE relies on to enact its mass deportation agenda, and to support efforts to defund and abolish this agency.”

“ICEwatch shines a light on ICE’s program of terrorizing communities through raids, ruses, home invasions, courthouse arrests, and other forms of coercion,” said Ghita Schwarz, Center for Constitutional Rights Senior Attorney. “By demonstrating the wide reach of ICE’s destructive and unlawful tactics, we hope to educate and empower immigrants and allies.”

ICEwatch allows users to filter summaries of ICE raids by location* and type of arrest tactic. Six types of enforcement tactics have been highlighted in the map as they are increasingly prevalent under the Trump administration, and underscore egregious and inhumane ICE practices and the agency’s disregard for fundamental rights. These include: (1) warrantless entry into a home; (2) the use of ruses to enter a home; (3) use of force; (4) the use of surveillance; (5) a significant increase in courthouse raids; and (6) an increase in collateral arrests.

In 2013, the Center for Constitutional Rights, on behalf of IDP, filed a Freedom of Information Act (FOIA) on ICE raids. By combining the information produced through this FOIA with the information IDP has collected by monitoring ICE over the past five years, we have extrapolated the key trends in tactics used by ICE to target and arrest immigrants in the New York Metropolitan area.

ICE arrests increased by 30% during Trump’s first year in office. Some examples of the agency’s “unshackling” detailed in ICEwatch include: ICE agents forcefully throwing a 6-month pregnant woman to the ground (Story 430), an ICE agent holding a gun to a man’s neck without identifying himself (Story 272), ICE agents threatening to withhold food and water from a man if he didn’t sign their paperwork (Story 562), a throng of agents storming into a home wearing black masks over their faces (Story 723), and six agents carrying guns and forcing their way into a home without identifying themselves while threatening to arrest everyone inside if they failed to cooperate (Story 322).

Additional information on the history of raid trends, FOIA documents, legal challenges to raids, litigation strategy examples, and a selection of individual stories of people who have been subject to ICE raids, can be found in IDP and CCR’s Defend Against ICE Raids and Community Arrests toolkit, available at: immdefense.org/raids, as well as Know Your Rights training materials and community resources.

* The locations on the map are an approximation based on the zip code or county of the raid and are not exact locations. ICEwatch is not meant to be read as a comprehensive report on ICE raid activity or tactics, but as a reflection of the raids and trends seen by IDP.