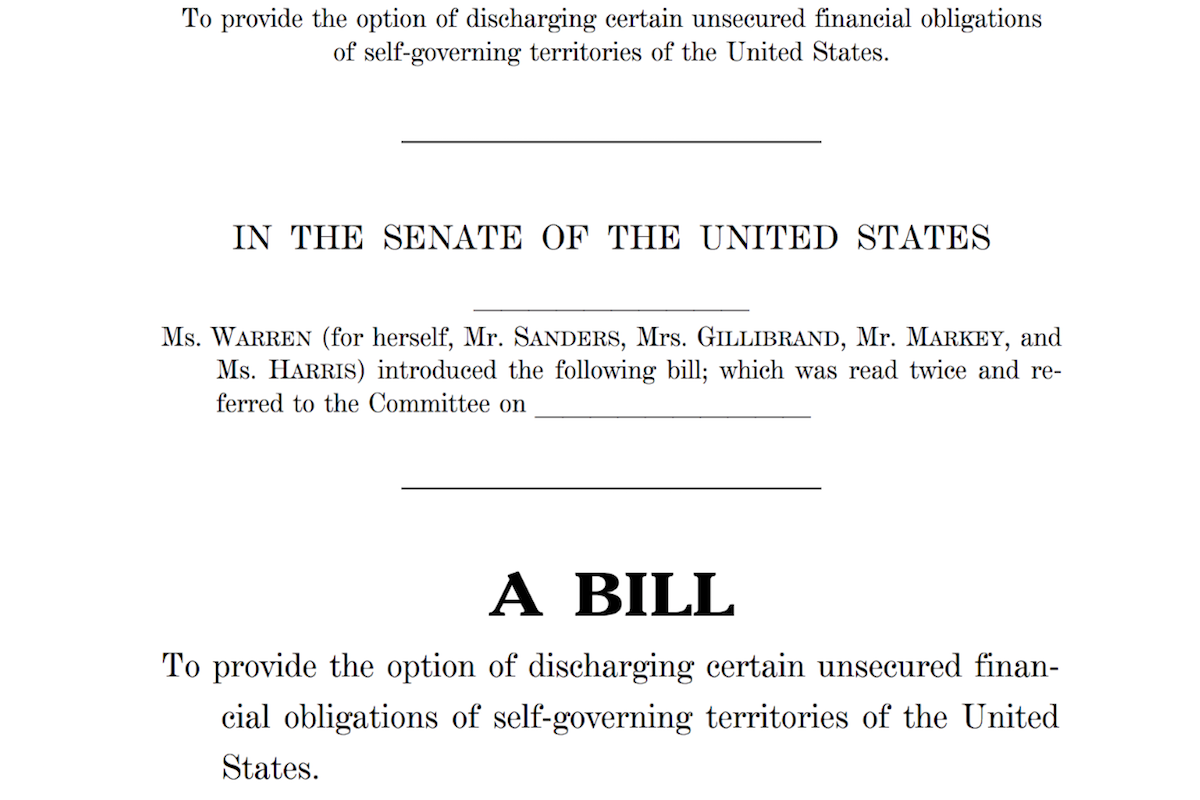 The following release was shared with media on Wednesday morning:

Since Hurricanes Irma and Maria ripped through Puerto Rico and the U.S. Virgin Islands, disaster response and reconstruction have been complicated by the territories’ debt. Few investors are willing to put money into rebuilding if the debt overhang means that the islands have no realistic chance to recover. Congress’s previous attempt to address the Puerto Rican debt crisis —PROMESA— was enacted before the hurricanes, so it was not designed to account for the recent devastation.

“Puerto Rico was already being squeezed before Hurricane Maria hit and will now have to rebuild under the weight of crushing debt. Our bill will give territories that have suffered an extraordinary crisis a route to comprehensive debt relief and a chance to get back on their feet,” said Senator Warren. “Disaster funding and the other resources in struggling territories’ budgets must not go to Wall Street vulture funds who snapped up their debt. Congress should pass this legislation right away—our fellow U.S. citizens are counting on us.”

“Greedy Wall Street vulture funds must not be allowed to reap huge profits off the suffering and misery of the Puerto Rican people for a second longer. It is time to end Wall Street’s stranglehold on Puerto Rico’s future, return control of the island to the people of Puerto Rico and give the territory the debt relief it so desperately needs to rebuild with dignity,” said Senator Sanders.

“Our fellow citizens in Puerto Rico have been suffering through an economic crisis for years, and Congress hasn’t done nearly enough to help,” said Senator Gillibrand. “It’s time to give Puerto Rico new control over what happens on the island and I am proud to support this important legislation to forgive Puerto Rico’s debt and protect Puerto Rico from predatory hedge funds. I urge all of my colleagues to do the right thing, support this bill, and finally help end this terrible economic crisis.”

“Puerto Rico was already struggling to address the island’s fiscal crisis before the devastation caused by Hurricanes Irma and Maria.  In the wake of those storms and failed response by the Trump administration, Puerto Ricans deserves access to every tool to rebuild their home both physically and fiscally. The U.S. Territorial Relief Act will provide some much needed economic flexibility for Puerto Rico and other U.S. territories impacted by these disasters,” said Senator Markey.

“When disaster hits anywhere in America, our government has a basic responsibility to help rebuild our devastated communities,” said Senator Harris. “Government failed at every level to respond to the disasters in Puerto Rico and the US Virgin Islands following Hurricanes Irma and Maria, and it’s time we fix that. This effort will ensure that comprehensive debt relief is available to Puerto Rico and the US Virgin Islands so that our fellow Americans in these communities may rebuild and achieve long-term economic success.”

“After Maria, Puerto Rico needs every tool possible to recover physically and economically.  This legislation provides another path for the Island to get back on its feet and begin the journey toward a brighter future.  I thank Senator Warren for her leadership and I plan to introduce the House companion in September,” said Representative Velázquez.

Millions of U.S. citizens reside in the territories of the United States but have limited or no access to many federal programs like Medicaid, Supplemental Security Income, and the Earned Income Tax Credit. Long economic downturns, declines in population, and natural disasters have made it extremely difficult for territories like Puerto Rico to bear crushing debt burdens.

“Over the past several years, Puerto Rico has been living with an economic noose around its neck due to its crippling debt crisis and the devastation created by Hurricane Maria. The island government simply does not have the means to pay off its debt and prioritize the well-being of its people. Senator Warren’s Territorial Relief Act of 2018 provides Puerto Rico a much-needed mechanism to put its people before financial firms and vulture funds. We look forward to working with Senator Warren and other members of Congress to get this bill passed, and allowing the people of Puerto Rico more control over their own destiny,” said José Calderón, President of the Hispanic Federation.

“The U.S. Territorial Relief Act provides a fair, efficient, and constitutional mechanism for helping long-neglected United States territories regain their economic footing,” wrote seven law professors with expertise in bankruptcy and financial regulation in a letter expressing support for the legislation. “In sum, the bill balances the need for immediate relief for the territories with protections for property interests, due process, and safeguards against abuse.”

“In my opinion, the U.S. Territorial Relief Act is constitutionally sound.  I hope that the bill is taken seriously by Congress and that debate can focus on its merits as public policy rather than being diverted by made-up constitutional objections,” wrote Laurence Tribe, Carl M. Loeb University Professor and Professor of Constitutional Law at Harvard, in a letter about the bill’s constitutionality.

“Puerto Rico needs all the tools available in the federal arsenal to fight poverty and inequality and to create the conditions for sustained economic growth. This bill goes a long way to fairly address Puerto Rico’s debt overhang, return capital to creditors, and create some of the conditions needed for the Island to come out of its long-term economic depression, the devastation brought about by recent storms, and to prepare and rebuild for long-term growth. All U.S. citizens have a stake in the long-term well-being and viability of Puerto Rico,” said Héctor R. Cordero-Guzmán, Professor at the Marxe School of Public and International Affairs at Baruch College of the City University of New York (CUNY).

Here is a one-page summary of the bill:

Here is the complete bill submitted to the Senate: