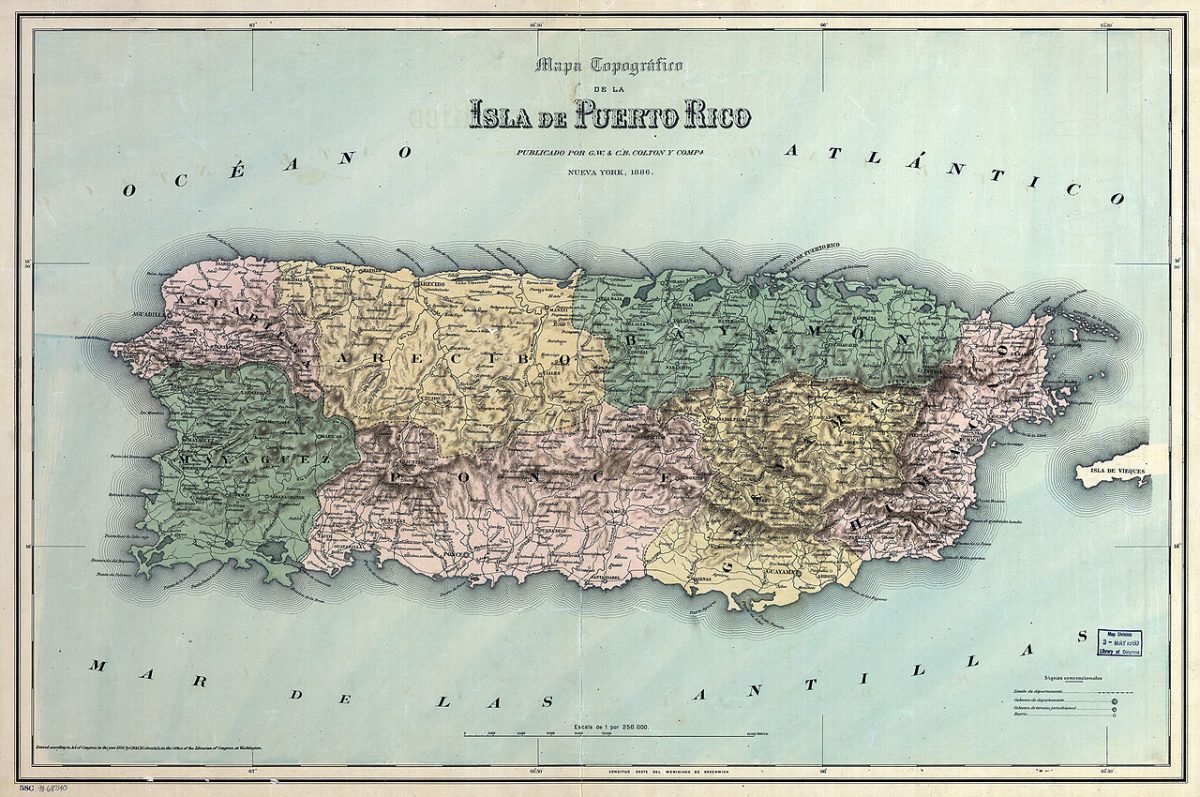 Departments of Puerto Rico under Spanish rule in 1886 (Public Domain)

Colonialism is a death by a thousand cuts. It is administered in snips and slashes, cutting bit by inch into the soul of a people. It is a form of incarceration: the denial of the rights of a nation to exist, to express itself in its natural language and form.

For Puerto Rico, the deepest cut came on July 25, 1898, when the spit-shined boot of the United States clod uninvited and occupied the island as war booty.

As of 2018, Puerto Rico has been a colony of the United States for 120 years. It is this year and this anniversary that a group of prominent Puerto Rican actors, directors, writers, producers and artists have chosen to demand the right to express themselves in their own language and as a nation.

Headed by Puerto Rican producer and director Juan Esteban Suárez, a letter dated July 25 has been sent to the Academy for the Motion Pictures Arts and Sciences (AMPAS), asking it to reconsider and allow Puerto Rico to compete in the Foreign Language Film category for the Oscars.

In 2010, AMPAS disqualified movies made in Puerto Rico from competing in the category of Best Foreign Language Film Oscar. The island had submitted entries since Puerto Rican director Marcos Zurinaga’s 1986 La gran fiesta (The Big Party) was the hopeful in the 59th Academy Awards in 1987.

In 1989, lauded Puerto Rican director Jacobo Morales’ What Happened to Santiago became the first local picture to receive an Oscar nomination. Cinema Paradiso won that year—august company for sure.

The controversy became public when the movie based on the novel America’s Dream by Puerto Rican author Esmeralda Santiago was not allowed to be considered as a possible nominee for Best Foreign Language Film for the 2012 Oscars.

The Oscars rejected it, saying that Puerto Rico, a U.S. territory, is part of the U.S. and therefore ineligible. Or non-existent—depends on how you want to view it.

Ric Robertson, then chief operating officer of the Academy, explained that the decision came from the executive committee that oversees the foreign film entries, and stated that Puerto Rico was an “unusual gray area.”

But for Suárez, and the 17 artists who signed the letter (among them Morales and Zurinaga), the time has come to demand reconsideration, and the right of Puerto Ricans to express themselves in their own language, and on their own terms.

The letter revisits the issue at a time when Puerto Rico faces its biggest challenge: how to transform itself after the devastation of Hurricane María, the blatant negligence and contempt from the administration of President Donald Trump and a new world order vis-à-vis the United States.

The letter states, in part:

Puerto Rico is a Spanish-speaking nation. We have our own culture, our own flag, and our own identity, that has been unquestionably recognized by organizations such as the International Olympics Committee, among others. We proudly represent our nation in other events.

Yes, Puerto Ricans are American citizens, but it is important for the members of the Academy, the foreign film entry committee and the world to understand that this is a result of an unwanted invasion of our island by the United States Armed Forces in 1898.

When asked about the timing of the letter, Suárez told Latino Rebels the following:

“Our letter to AMPAS is just part of the struggle of Puerto Ricans trying to keep our culture alive, because culture and language defines us as a nation. We have been resilient, defending who we really are. To have AMPAS exclude Puerto Rico from competing on the Best Foreign Language Film category on the grounds that the island is a ‘territory’ of the United States is a slap in our face. We found it mind-blowing. What AMPAS did was obviously out of ignorance.”

“We are a foreign country under the control of a powerful nation. We are a colony of the United States. Yes, we are talking about imperialism,” he added. “Our battle to defend our identity intensified after María.”

Morales, considered one of the most influential Puerto Rican directors in the island history, explained why he signed the letter and stands by its message.

“The why of this letter is that the Academy bases its conclusion on something that is just not real. They have a superficial vision of the issue,” he said. “And what happens is that they are very distant from the knowledge, the understanding, that Puerto Rico, even though it might be a colony of the United States, a territory of the Americans, on the other hand, is a nation. It is a country that has its culture and its artistic expressions must inevitably obey these cultural roots.”

“But what I believe is very evident, that what highlights our culture, our identity, does not match with the intention of some to push us to form part of the United States,” Morales added.

For Zurinaga, the decision taken by AMPAS is “another way of punishing us for wanting to be true to our culture and our nation.”

“We have been fighting this now for more than 30 years. After all that has happened, the need to change our relationship with the United States, ‘esta a flor de piel,’ is on the surface of the skin,” he said.

“We represent a nation, a nation that speaks Spanish and that expresses itself in Spanish,” Zurinaga noted.

With isolation, comes control. And that has been the overriding ethos of the United States foreign policy towards Puerto Rico. Basically, the island is their colony. They might not know what to do with it, but it’s better not to let the Puerto Rican voices be heard.

María did away with all of that.

The full letter is below: 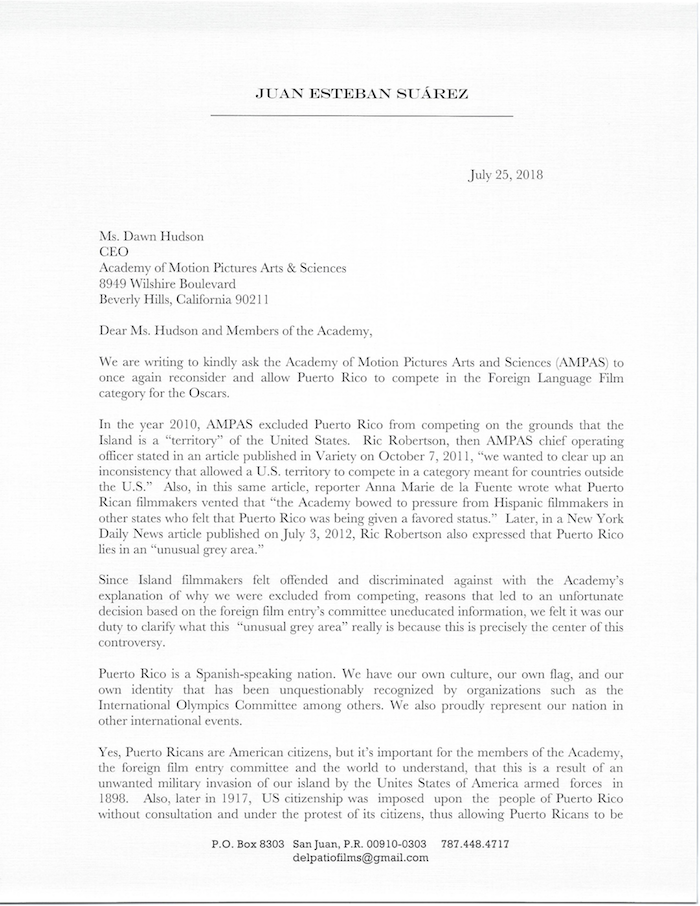 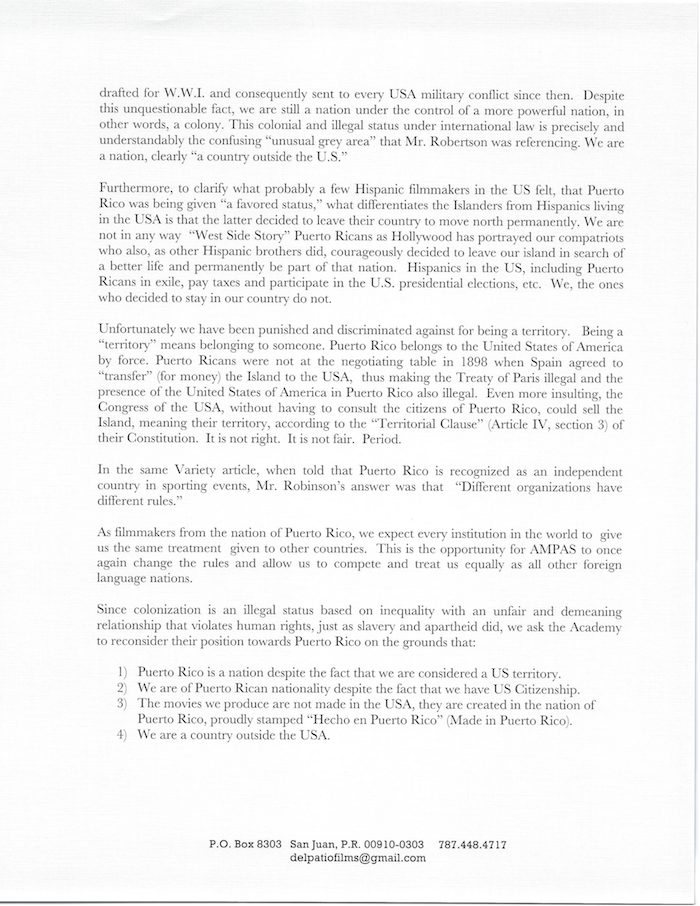 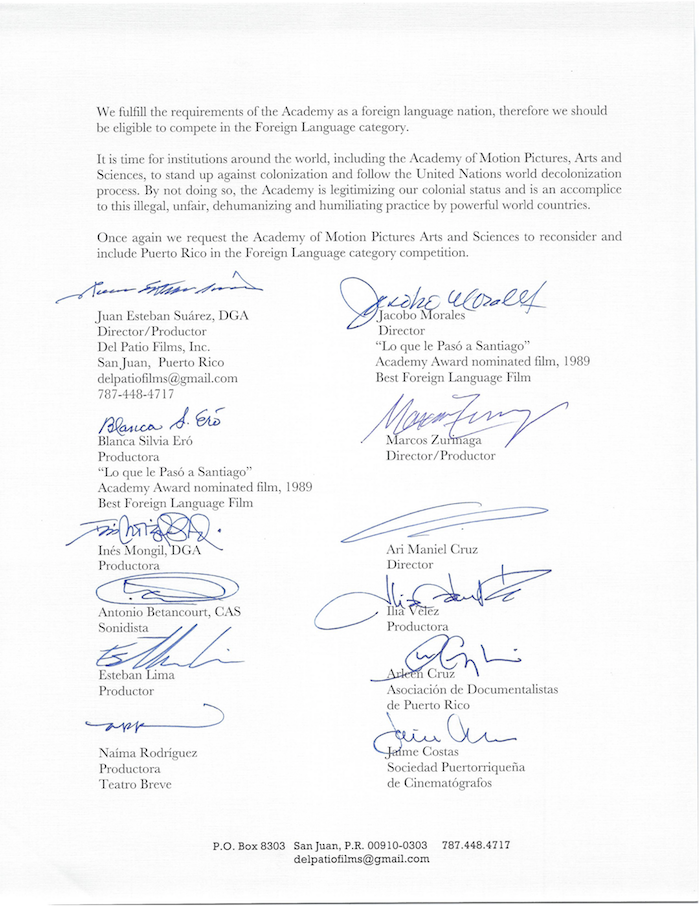 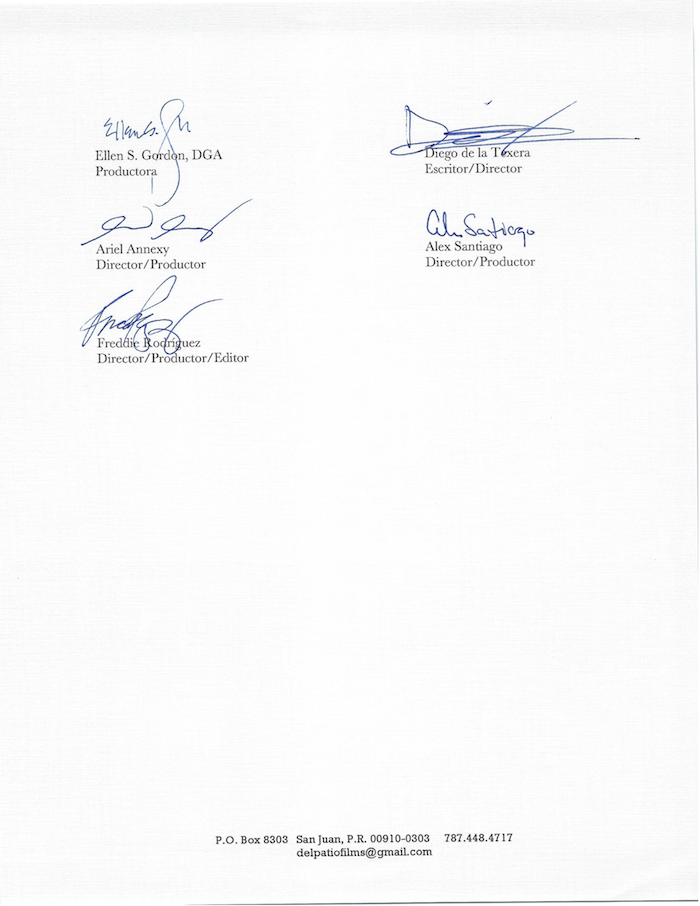