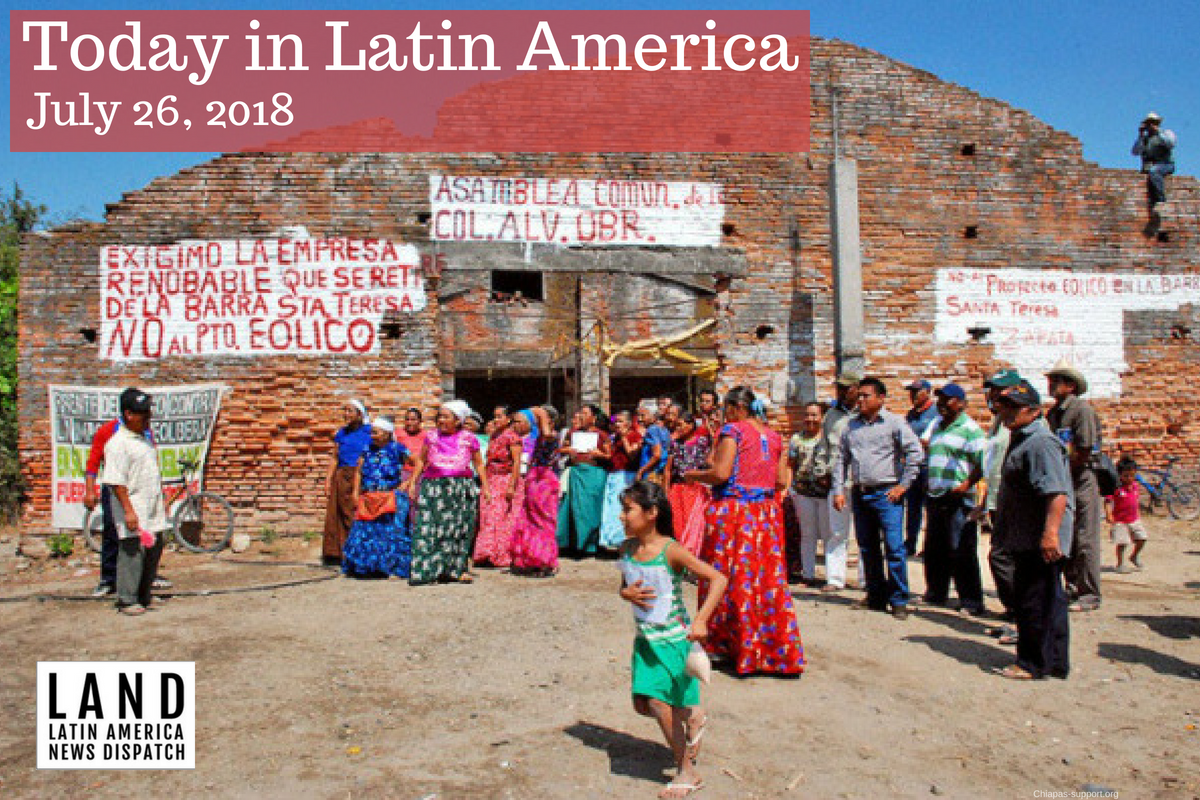 MEXICO-BRAZIL-HONDURAS: An indigenous community police officer was murdered in Mexico on Sunday in the community of Álvaro Obregón, in Juchitán, Oaxaca. The National Indigenous Congress of Mexico and the Indigenous Governing Council condemned the murder and said in a statement that, “He was cowardly murdered by a masked person, apparently a member of Juchitán’s municipal police.” Rolando Crispín López, an Indigenous Binniza (also called Zapoteco, in Spanish), was part of several community organizations that have been fighting since 2012 plans by wind energy company Mareña Renovables to build a plant in the area.

Watchdog group Global Witness released a report on Tuesday saying killings of land and environmental activists rose worldwide in 2017, with Mexico registering a sharp spike rising from three to 15 and Brazil breaking the record for the highest number of murders in a single country with 57 people killed. The group linked the spike in Mexico to organized crime and a generalized climate of impunity and criticized Brazilian President Michel Temer’s administration for rolling back environmental protections and cutting funding for institutions that promote rights of indigenous people and small landholders. Temer’s office responded on Tuesday evening calling the report “fake news,” saying some of the killings were related to drug-trafficking disputes and arguing it was stigmatizing the entire agribusiness industry on account of a few isolated conflicts. Meanwhile, Honduras ceased to be the deadliest country per capita for land activists as only five activists were murdered there in 2017, compared with 14 the previous year. That improvement followed an outcry over the 2016 murder of Berta Cáceres, a winner of the prestigious Goldman Environmental Prize.

MEXICO-CANADA: Mexican and Canadian officials said yesterday after a meeting in Mexico City that the North American Free Trade Agreement will continue to be a trilateral pact. Canadian Foreign Minister Chrystia Freeland and Mexican Economy Minister Ildefonso Guajardo said they disagreed with proposals by U.S. officials to negotiate separate deals and of a so-called “sunset clause,” which would require the agreement to be renegotiated every five years. Although Mexican officials are traveling to Washington this week to meet with their U.S. counterparts, Guajardo said that a deal between all three countries remained the goal.

PUERTO RICO: Gov. Ricardo Rosselló declined to attend a hearing held yesterday by the U.S. House Committee on Natural Resources in Washington where federal lawmakers demanded that Puerto Rico quickly privatize its bankrupt power company. Roselló issued a statement saying it was “unnecessary and inappropriate for Congress to give the Department of Energy control of PREPA [the Puerto Rico Electric Power Authority], effectively robbing the island of a critical resource at a perilous time.”

HONDURAS: Government officials negotiated with transport unions during a truce to the national transportation strike which shut down all transport across the country since last Thursday. Strikers originally demanded a fare increase of 25 cents, but after a public outcry changed their demand to lowering gas prices by 96 cents per gallon. The government of President Juan Orlando Hernández first offered to reduce prices by 10 cents per gallon and the offered a fuel subsidy of up to $37 per month for taxi drivers and $107 per month for bus drivers, but both proposals were rejected by union leaders. The strike is set to restart at 5:00 p.m. on Friday afternoon.

VENEZUELA: President Nicolás Maduro announced yesterday his government will issue new money with five fewer zeros. A previous plan to eliminate three zeros after Aug. 4 was pushed back to Aug. 20 as the number of eliminated zeros was increased. In 2008, then President Hugo Chávez eliminated three zeros from the bolivar, renaming it bolívar fuerte, or strong bolivar. The new money will be called bolívar soberano, or sovereign bolivar. The new paper bills will have denominations ranging from 2 up to 500, the lowest represents 200,000 current bolivars and the highest stands in for 50 million. A simple lunch, which with current inflation can cost 3 million bolivars will cost 30 sovereign bolivars.

BOLIVIA: The Supreme Tribunal requested yesterday that the Legislative Assembly authorize a trial against former president Carlos Mesa for causing the state to lose over $40 million that had to be paid to the Chilean mining company Quirobax when in 2004 Mesa annulled its concession rights to the Salar de Uyuni salt flat in southwest Bolivia.

COLOMBIA: Former president and senator Álvaro Uribe, who on Tuesday announced he would quit the Senate amid a criminal investigation but hasn’t yet formalized his resignation, accused yesterday the British intelligence agency MI6 of colluding with his former protégé and turned political opponent current president Juan Manuel Santos to supply recordings that implicate him in crimes. Uribe tweeted it is a ruse created against him by foreign authorities.

CHILE: About 40,000 people marched through the streets of Santiago last night demanding the right to safe, free and legal abortions in support of a bill that was introduced to Congress earlier in the day. Pro-choice supporters wore green bandanas like the ones used by activists in Argentina during last month’s massive marches. Three women and a police officer were stabbed during the demonstration.

BRAZIL: Facebook announced yesterday it had removed a network of pages and profilesin Brazil used to spread misinformation and foment divisiveness ahead of October’s presidential elections. The network of 196 pages and 87 profiles was handled by the Free Brazil Movement, a right-leaning organization that was one of the main promoters behind the protests against former left-wing president Dilma Rousseff before she was impeached in 2016.