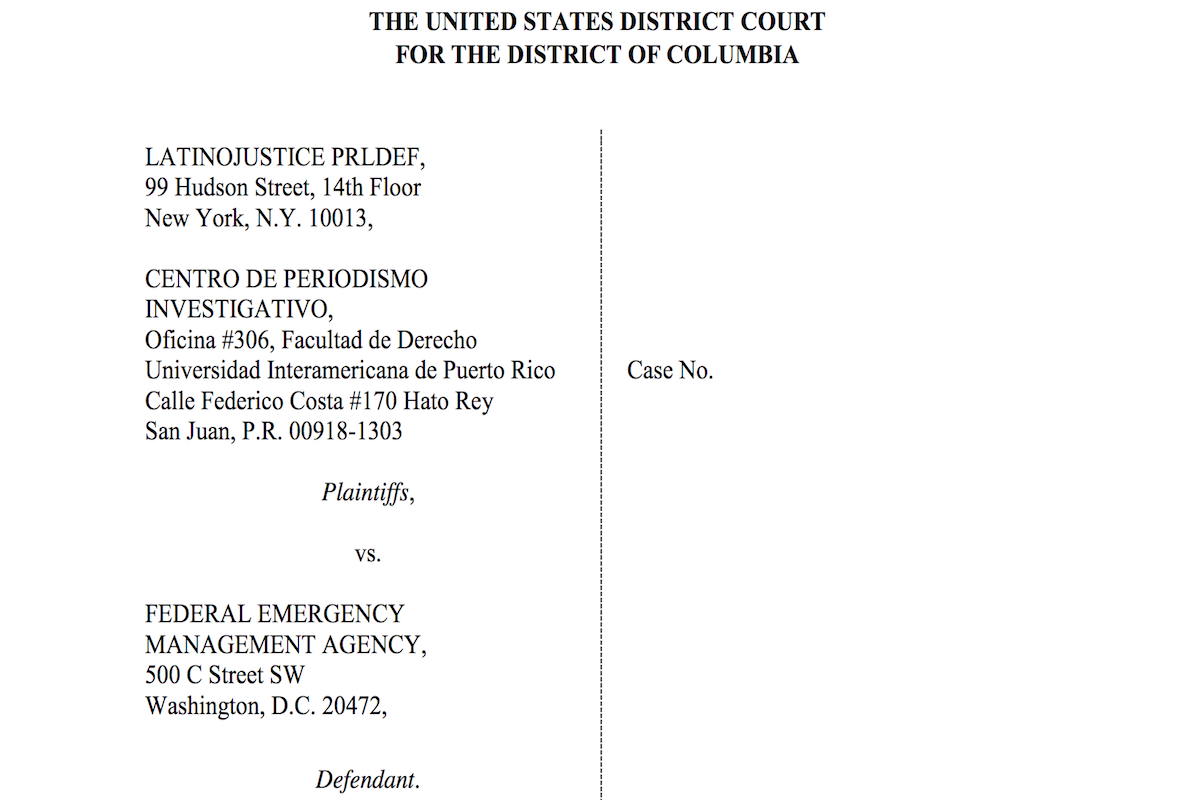 San Juan, P.R. | Washington, D.C. — On behalf of the Center for Investigative Journalism in Puerto Rico and LatinoJustice, Democracy Forward Foundation filed a lawsuit on Tuesday against the Federal Emergency Management Agency (FEMA) for failing to release records detailing information about its response to the disaster.

“FEMA has tried to escape accountability, dismissing our information requests for nearly six months now and trying to ignore our FOIA petitions. That agency is in part responsible for the slow and ineffective recovery process that we have documented and that people have experienced in Puerto Rico, and we want to discover why. Why is it that housing assistance has been denied to so many people on the Island? Which are the towns with more denials? What is the demographic, racial and gender profile of those who have requested assistance and have not received it? These are only some of the unanswered questions that FEMA has to address. That is the purpose of this lawsuit,” said Carla Minet, Executive Director for the Center for Investigative Journalism.

The Freedom of Information Act (FOIA) requests, which were submitted nearly six months ago, seek records relating to FEMA’s preparation for and response to Hurricane María. The Administration has not provided any records in response to the requests, even though the deadline to do so has long since passed, violating its duties under the FOIA.

“The lack of transparency or release of basic information about a disaster that killed thousands and harmed millions is part of a larger continuum of negligence by the federal government, particularly FEMA. Puerto Ricans have a right to access information concerning how the agency prepared for, responded to and assisted the island after one of the worst natural disasters in U.S. history,” said Natasha Lycia Ora Bannan, Associate Counsel of LatinoJustice PRLDEF.

Today’s push for answers follows public remarks by President Trump, including in the immediate aftermath of the hurricane, in which he dismissed Hurricane María as not a “real catastrophe.” Such remarks cast doubt on the seriousness with which the Administration approached its emergency relief duties in Puerto Rico and underscore the need for additional transparency and scrutiny.

The case follows reports that FEMA was “sorely unprepared” and “lacked situational awareness” during the response. Despite President Trump’s assertion that his administration “leapt into action,” FEMA itself documented numerous ways in which it fell short.

“The Trump Administration’s response to Hurricane María is a national shame. And the scant information FEMA has so far released detailing the extent of its role in disaster relief stops far short of transparency requirements,” said Democracy Forward Litigation Director Javier Guzman. “The millions of Americans in Puerto Rico deserve to understand precisely how the federal government responded.”

On September 20, 2017, Hurricane Maria made landfall on Puerto Rico, where it knocked out the island’s power grid and led to thousands of estimated deaths. This makes the natural disaster among the deadliest in American history.

The full lawsuit is below:

Editor’s Note: The Center for Investigative Journalism is a contributor to Latino Rebels.