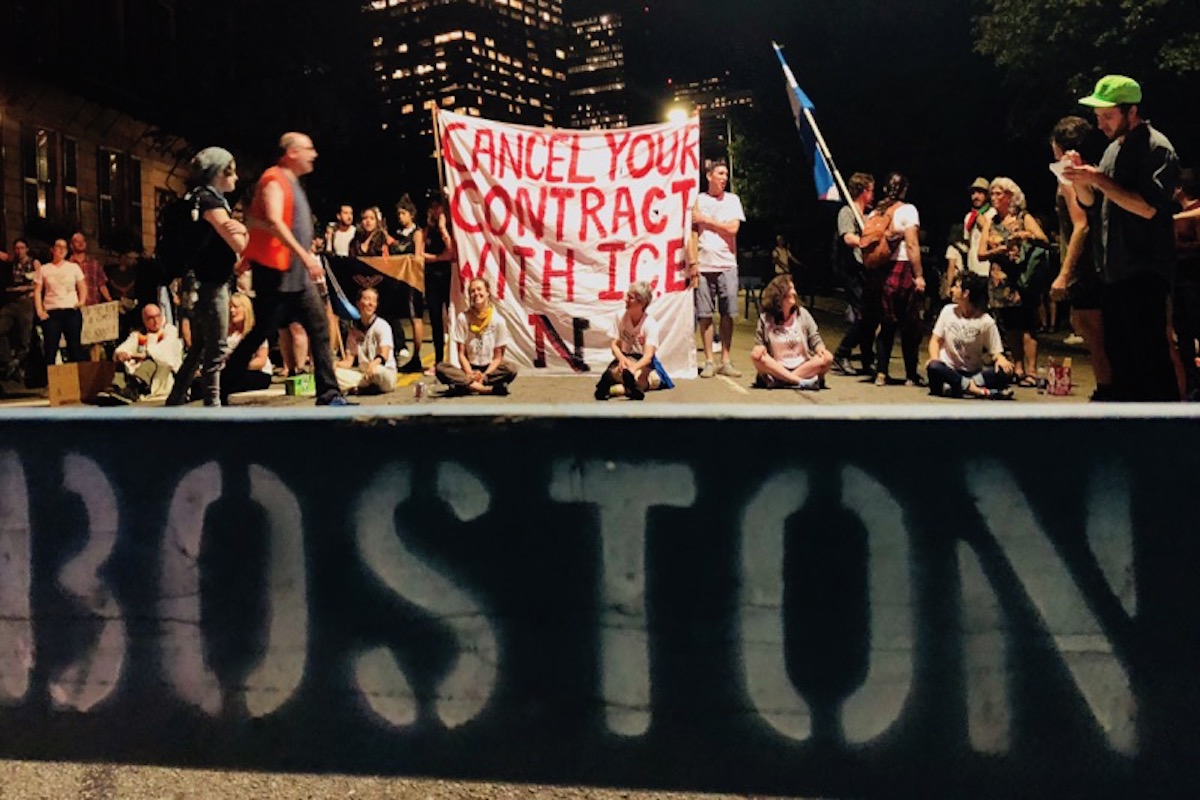 July 31 protest in Boston (Via @CosechaMovement)

The following media release, photos and video come from @CosechaMovement:

On Tuesday, hundreds of immigrants and community members joined rallies, direct actions and events organized in more than 10 cities across the country, targeting local governments and corporations that do business with Immigration and Customs Enforcement (ICE).

The national day of action was coordinated and supported by Movimiento Cosecha, under the banner “#WeWontBeComplicit with ICE’s deportation machine: End all business with ICE!”

Actions resulted in 28 arrests across locations.

UPDATE: 28 people were arrested yesterday demanding Amazon, Northeastern & all the rest cancel contracts with ICE! If you keep doing business w ICE, we wont let u do business at all #WeWontBeComplicit https://t.co/xvH9QER510 pic.twitter.com/beAvxa2Stt

In New York City, Cosecha activists were arrested after blocking the entrance to the Amazon store in downtown Manhattan. The direct action came after a rally that Cosecha, Science For the People and other partners organized targeting Microsoft, Salesforce, and Amazon for their contracts with ICE. 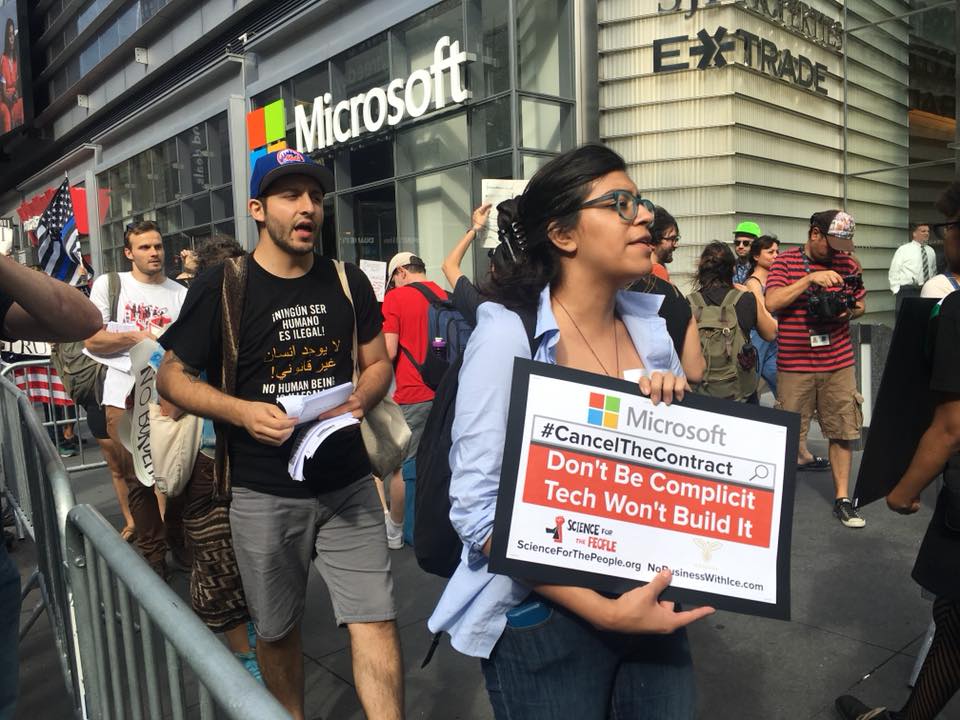 “We are targeting Microsoft, Salesforce and Amazon for their contracts with ICE and their complicity in the violent separation of families and overall abuse of immigrants. Amazon continues to develop technology for ICE and knowingly enables ICE to persecute thousands of families, like my own” said Lucia Allain, an organizer with Cosecha. “If Amazon continues to do business with ICE, we won’t let them do business at all.” After much pressure to cut ties with ICE, Amazon recently responded by proclaiming unwavering support for law enforcement and intelligence agencies.

In Boston, a rally of hundreds turned into an occupation outside of the Northeastern University President’s home. In Philadelphia, activists were arrested for blocking the entranceways at Comcast Headquarters. In Palo Alto, activists rallied and tried to enter Palantir HQ but were locked out. They delivered a letter to Palantir HQ demanding Palantir end its contract with ICE.

“We know that ICE relies on so many institutions and companies to function day in and day out. And we know that if our counties stopped allowing ICE to use the jails, if local agencies stopped sharing data with ICE, and if companies stopped selling technology to ICE, it would be impossible for ICE to function,” said Maria Fernanda Cabello, an undocumented organizer with Cosecha. “We are rising up to say that we will no longer be complicit with ICE. We will demand an end to county contracts with ICE. We will target companies that do business with ICE. And we will show that the American public is on the side of immigrant families—not Trump and his deportation machine.”

“We know the history of academic institutions enabling human rights abuses, and we are saying we won’t be complicit in this persecution,” said Carlos Gabriel, a Cosecha organizer and Boston community member. Hundreds of students, faculty, and community members rallied and 10 blocked a street in front of the Northeastern University President’s home. Northeastern has a multi-million dollar contract and a student work program with ICE. “We are demanding Northeastern cut all ties with ICE and calling on the community to continue to take action until they do so.” Students and community members are now occupying the President’s home and will continue to take action.

“Every year, my county government is paid thousands of dollars to help ICE kidnap members of our community,” said Gema Lowe, an undocumented mother and Cosecha organizer in Grand Rapids, Michigan. “So many immigrant families have been torn apart and destroyed. We cannot stand by and be complicit in this any longer. That’s why hundreds of Kent County residents are telling our commissioners to end the contract now. We went to their meeting in June, we went to their meeting in July, and we will keep making our voices heard until they end the contract.” Last Thursday, a large crowd of community members attended the board of commissioners meeting to testify and present a petition with over 1,600 signatures in favor of ending the contract.