NHMC and NLMC Target Paramount Pictures for Their Lack of Latino Actors, Writers and Directors

PASADENA, CALIF. — Today, the National Hispanic Media Coalition (NHMC) and the National Latino Media Council (NLMC) announced its plans to target Paramount Pictures for their lack of Latino actors, writers, and directors. NHMC and NLMC are asking the public to join them in a series of actions to be taken against Paramount, including a social media campaign and demonstrations nationwide until and if they sign a memorandum of understanding (MOU) with NHMC/NLMC, detailing how they plan to solve their Latino exclusion problem. 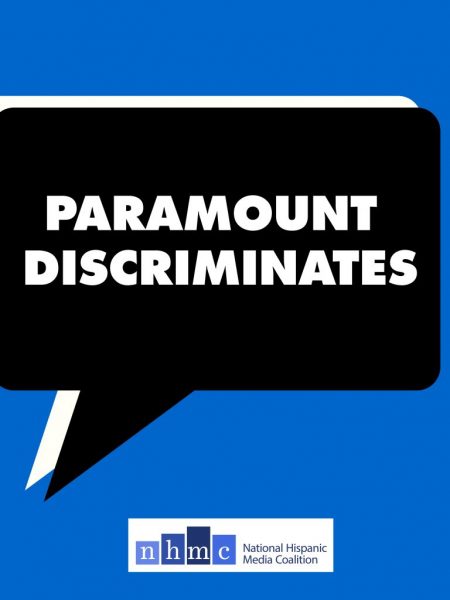 Alex Nogales, President & CEO of the National Hispanic Media Coalition made the following statement: “Latinos can no longer wait for the film companies to, as they say, bring us into their films ‘organically.’ Latinos must be part and parcel of the film industry. The talent is there and as a community, we need the positive stories and sensitivity of our actors, writers, and directors to counter the anti-Latino rhetoric and actions of the Trump administration who has influenced a large portion of the population to look at us as the dregs of society.”

Gloria Molina, former Los Angeles County Supervisor, who spoke at the press conference, said, “With only 2.7% of Latinos being in films in 2016, according to a report from UCLA’s Bunche Center, the lack of representation of Latinos by the film studios is an embarrassment and a disservice to our community. The unfair portrayal of our community paired with our current political climate is putting us at harm to how the world sees us. It’s time for Latinos to be included, time for people outside our community to see what makes the Latino community truly great.”

“Severe underrepresentation in media, to the point of near total exclusion, of any significant community has real consequences, including encouraging unscrupulous political demagogues to target the excluded community in campaigns and rhetoric,” said Thomas A. Saenz, MALDEF president and general counsel and NLMC chair. “The Latino community understands these consequences and will hold the media companies with the worst records of underrepresentation accountable for their complicity in the denial of civil rights to the Latino community, the nation’s largest minority group.”

“My message is for the Latinx community. We are more than 57 million people in the United States with a purchasing power of more than 1.5 trillion dollars. Latinos purchase 24% of all tickets sold at the box office. That’s REAL power!” said Brenda Victoria Castillo, President & CEO-Elect of the National Hispanic Media Coalition. “Do not be compliant and accepting of the way the film studios discriminate against us Latinos. Resist the way Hollywood depicts us in negative stereotypes. Rise Up, Stay Woke, and Take Action!”

Matt A. Barreto, Ph.D., Co-founder and Managing Partner of Latino Decisions, attended the press conference to present recent poll findings from NHMC commissioned report, “Latinos, Movie Watching, & Views on Representation in Film.” Latino Decisions surveyed 423 adults in the United States who self-identified as Latino or Hispanic, with data collected from May 21, 2018 to May 29, 2018. The focus of the poll was to probe Latinos about their movie consumption patterns in the last 12 months, in theater and in home, views on Latino representation in film, and their willingness to act in response to poor representation.

The full results are the poll are below: