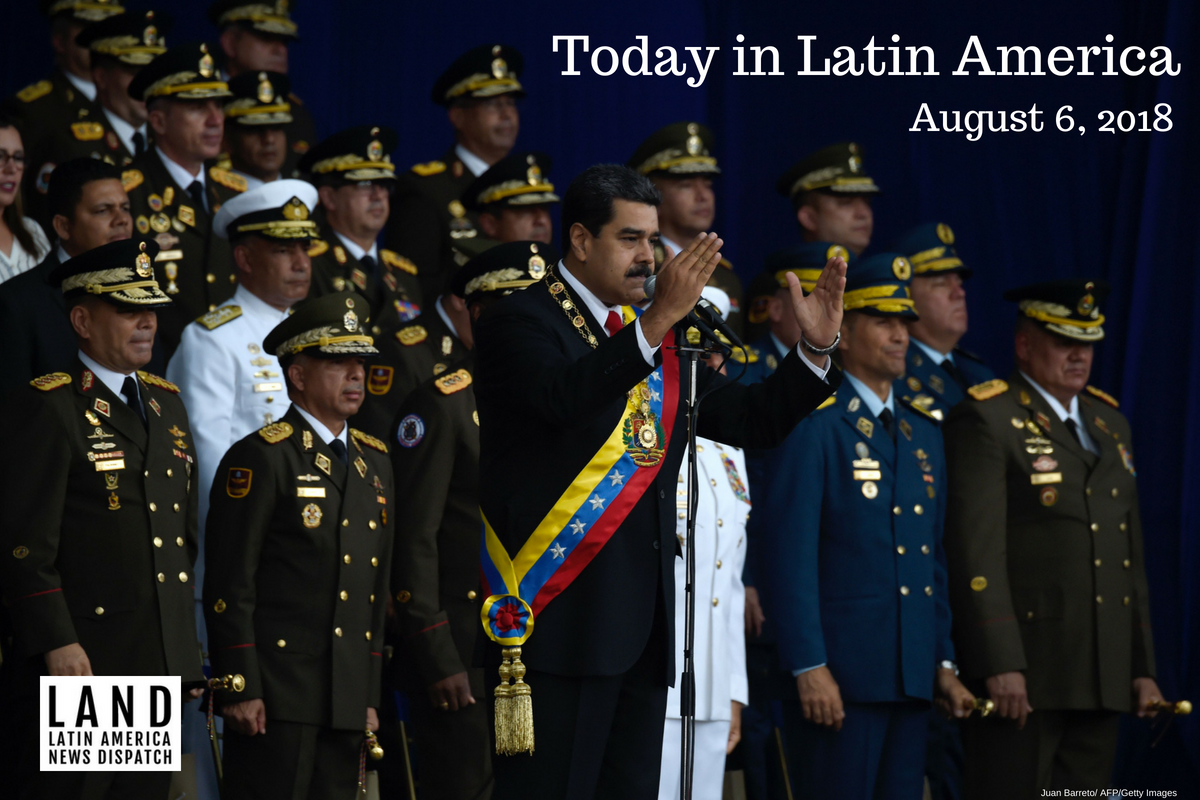 VENEZUELA: Drones exploded near President Nicolás Maduro in an apparent assassination attempt while he was delivering a televised speech at a military event on Saturday. Interior Minister Néstor Reverol later said two drones, each packed with over two pounds of C-4 plastic explosive, were aimed at Maduro, First Lady Cilia Flores and the military high command. One of the drones exploded near the podium were Maduro was speaking but not close enough to injure him and the other one crashed into an apartment building two blocks away. Reverol said security services were able to take both drones off-course electronically, injuring seven National Guard soldiers, with no deadly harm.

After the attacks, Maduro accused the Venezuelan “far right,” outgoing Colombian president Juan Manuel Santos and the United States of being behind the attack, without providing any proof. The coalition of opposition groups in Venezuela known as the Broad Front issued a statement saying “It’s evident that the initial reaction of the government isn’t aimed at attempting to clarify what happened, but rather to take advantage of the situation and irresponsibly and sweepingly attack the ‘opposition.’” Colombia’s foreign ministry denied the government was involved, saying such allegations were “absurd” and “lacked any foundations.” And U.S. National Security Adviser John Bolton said there was “no U.S. government involvement.” An obscure group calling itself Soldiers in T-shirts claimed responsibility but news agencies including the Associated Press could not independently verify the authenticity of the message. On Sunday, the Interior Minister announced six people had been detained but didn’t provide their identities.

The National Press Workers’ Union confirmed that journalists of private and international media including the Associated Press, Noticias Caracol, Globovisión and Telemundo were detained for several hours by the National Guard and military counterintelligence while they were attempting to report on the explosions. Images of the attack, including that of a bleeding official, come from Russian and Chinese news agencies.

MEXICO: Eleven people were murdered on Friday at a home near a prison on the outskirts of border city Ciudad Juárez in the northern state of Chihuahua. Authorities said the bodies of the eight men and three women were found tied up and with signs of torture. The state Attorney General’s Office is launching an investigation.

GUATEMALA: Former president Álvaro Colom has been freed on bail after spending nearly six months in jail under investigation for alleged corruption. The terms of Colom’s release, who was president from 2008 to 2012, had him pay $133,000 and prohibit him from leaving the department of Guatemala, which includes the capital city.

DOMINICA-BARBADOS: A medical school based in Dominica that sustained millions of dollars in losses after Hurricane Maria announced on Friday that it is relocating to the Barbadian capital of Bridgetown. U.S. students make up 90 percent of Ross University School.

NICARAGUA: The Nicaraguan Pro-Human Rights Association, a rights group that has been very active in documenting the death toll of the recent months of political unrest, announced late on Saturday that it is closing its offices in Managua due to threats and harassment by illegal armed groups and judicial persecution, but that it will continue to attend to complaints online. The group accuses government security forces and allied paramilitary groups of most of the 448 deaths it has documented, the highest among other similar counts.

COLOMBIA: Authorities said on Friday that three police officers and a soldier were kidnapped by the ELN in a remote jungle community in the western Chocó province. Only days before, the administration of outgoing president Juan Manuel Santos and the leaders of the ELN had failed to reach a ceasefire agreement during peace negotiations in La Habana, Cuba.

ARGENTINA: The Grandmothers of the Plaza de Mayo human rights organization announced on Friday that they have found and confirmed the identity of the 128th baby stolen during the military dictatorship. DNA tests determined that a 42-year-old man is Marcos Eduardo Ramos, the son of Rosario del Carmen Ramos a militant who opposed the dictatorship. Military and police authorities in the northern province of Tucumán kidnapped Ramos with two of her sons, Marcos who was five months old and Ismael, who was older and was able to escape, in 1976. Ramos was disappeared and Marcos was given to a family close to the regime. Officials during the dictatorship have been convicted of organizing the systematic theft of babies from political prisoners, the grandmothers organization continues to look for about 500 or so newborns who were stolen and raised by surrogate families.

BRAZIL: The Workers’ Party chose former president Luiz Inácio Lula da Silva as its presidential candidate at a convention in São Paulo on Saturday. Lula leads the polls by a large margin but has been in jail since April on a corruption conviction and is likely to be barred by Brazil’s electoral court. He denies any wrongdoing and claims it is a political persecution. Surveys suggest voters would lend their support to another Workers’ Party candidate if he cannot participate.