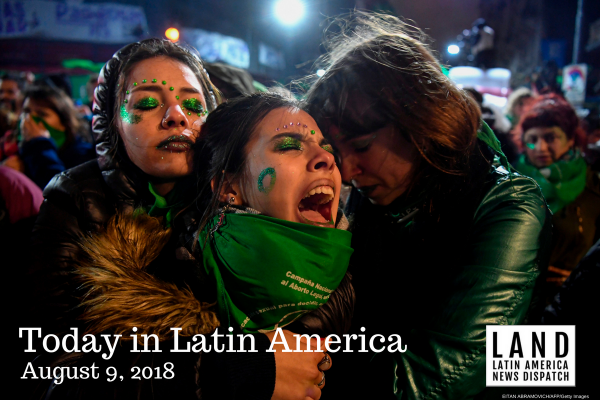 Activists in favour of the legalization of abortion outside the National Congress in Buenos Aires. (Photo by Eitan Abramovich/AFP/Getty Images)

ARGENTINA: The Senate narrowly rejected a bill to legalize abortion during the first 14 weeks of pregnancy today. Senators began debating the bill yesterday morning to avoid the discussion going late into the night, as it did a month ago when the bill was approved by the lower house. Still, the discussion lasted 16 hours and ended at 3 a.m. when 38 lawmakers voted against the bill, 31 voted in favor and two abstained. Meanwhile, thousands of detractors of the bill wearing sky blue handkerchiefs and thousands of supporters wearing emerald green kerchiefs gathered outside Congress despite the cold weather, and the Roman Catholic Church held a “Mass for Life” at the Buenos Aires Metropolitan Cathedral. When the result was announced the blue side celebrated with fireworks and the green side lit fires and threw rocks at the Senate building shortly clashing with police and leading to an unspecified number of detentions.

The current law dates from 1921 and allows abortion only when pregnancy is the result of rape or when it poses grave risks to the woman’s health. But estimates say between 350,000 and 500,000 women get clandestine abortions every year and complications from these abortions are the leading cause of maternal deaths in the country, accounting for 18 percent of these deaths.

The pressure of the Catholic Church against legalization was fundamental to the final result of the vote. Pope Francis, who was archbishop of Buenos Aires before being elected Pope in 2013, described abortion as the “white glove” equivalent of the Nazi-era eugenics program a few weeks ago and personally requested some anti-abortion legislators to lobby to reject the bill. Argentina would’ve been the biggest country in the region to legalize abortion. Currently, only Uruguay, Cuba, Guyana and Mexico City allow early-term abortion without restrictions.

MEXICO: A federal court dismissed embezzling charges against the former leader of the country’s most powerful teachers’ union. Elba Esther Gordillo, once one of the most powerful people in Mexico as the leader of the 1.5 million-member Mexican teachers’ union, spent almost five years in prison and another few months in house arrest awaiting trial accused of embezzling about $160 million until yesterday a court determined there weren’t sufficient grounds to proceed with the trial. Gordillo always described herself as a political prisoner.

DOMINICAN REPUBLIC: The trial against the seven people accused of receiving the $92 million in bribes that Brazilian construction firm Odebrecht confessed to having distributed in the nation was postponed yesterday by Supreme Court justice Francisco Ortega. The pre-trial hearing was rescheduled for August 21 after former minister of public works Víctor Díaz Rúa, one of the accused, asked for the possibility to review the evidence against him.

GUATEMALA: Jailed former president Otto Pérez Molina was taken to a hospital after experiencing trouble with his pacemaker while playing sports on Tuesday. The medical center’s director said he is in stable condition. Only one week ago a judge had ordered Pérez Molina to be sent back to pre-trial detention after a three-month-long hospitalization when the National Forensic Sciences Institute declared his heart issues could be treated on an outpatient basis.

BOLIVIA: Hundreds of protesters gathered outside the main plaza of Potosí on Monday to protest the government’s official celebration of Bolivia’s independence day. Twenty-five opposition groups led the call to object President Evo Morales’ plans to run for a fourth term in 2019 despite a national referendum which opposed the constitutional amendment that would have granted him another term.

COLOMBIA: During his last days in government, former president Juan Manuel Santos silently recognized Palestine as a “free, independent and sovereign state.” Yesterday, a day after the new government of Iván Duque took office, Palestine officials made the letter signed by former Colombian foreign minister Maria Ángela Holguín public. Colombia was the last South American country to give this recognition to Palestine, but the new foreign minister Carlos Holmes Trujillo said the new government will “carefully analyze that decision.”

CHILE: Former president Michelle Bachelet was nominated yesterday by United Nations’ secretary-general Antonio Guterres as the next U.N. human rights chief. A vote will take place in the General Assembly tomorrow morning where the nomination is virtually certain to be approved. Bachelet was the first head of U.N. Women between her first tenure as Chile’s president in 2006-2010 and her second tenure in 2014-2018.