*This piece was written jointly by Jesús Iñiguez and Nancy Meza.

The original UndocuMedia team officially came together in 2011. The current iteration of UndocuMedia does not reflect the values and leadership that the original team had envisioned for the platform. And given Iván Ceja’s resignation and that his uncle, Francisco J. Barragán (a U.S. citizen and the self-appointed chairman of UndocuMedia’s board), has been charged with nepotism and obstructing accountability, we are asking for UndocuMedia, as a name and platform, be returned to its founders, the people who built it, and the undocumented community.

Back during its inception, UndocuMedia wasn’t an entity. It wasn’t a hashtag nor a social media platform. It wasn’t incorporated; it wasn’t even an organization.

UndocuMedia was a philosophy; a way of thinking and carrying ourselves and our work that was born from the observations, revelations, experiences, and ideas from the members of the original group of undocumented creatives and organizers. It was an approach to presenting undocumented narratives that we all carried into all of our work in the years that followed its founding. 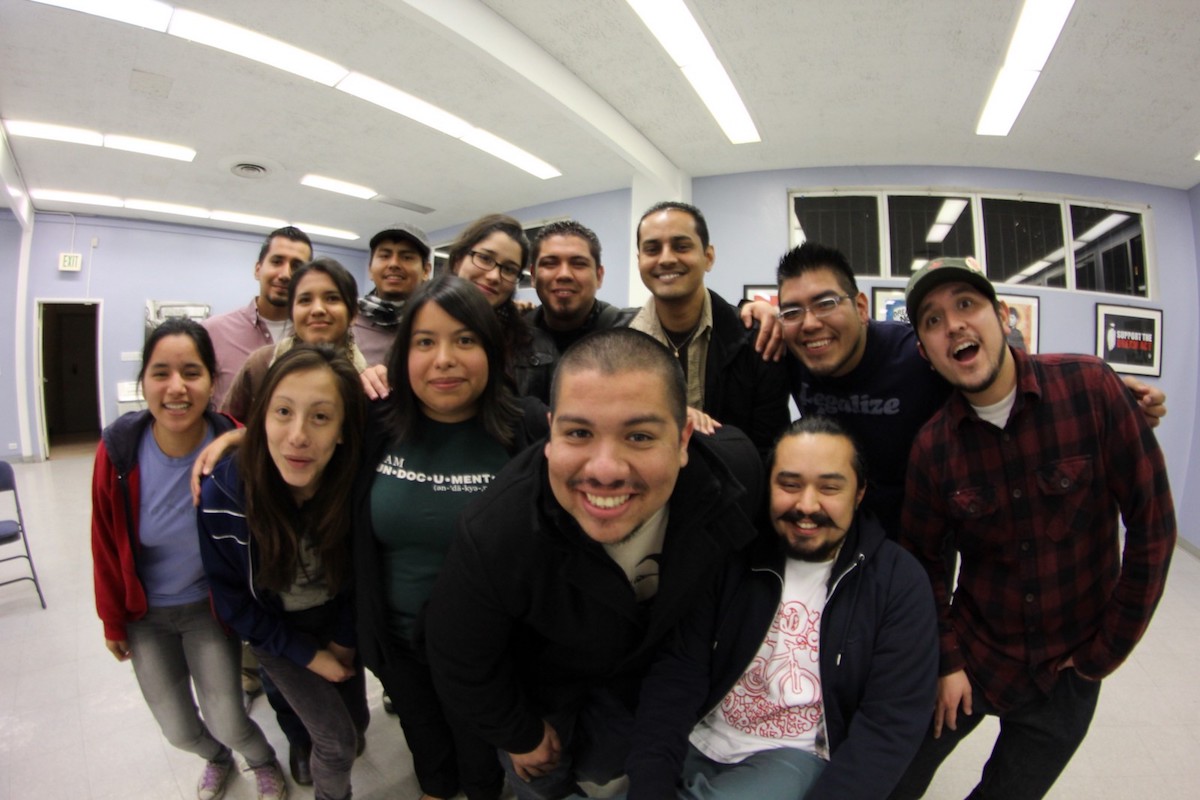 The undocumented experience is vast. It encompasses many different experiences, locations, and people from every corner of the world and from all walks of life. It isn’t a homogenous experience nor is it unique to one border. It isn’t just one single diaspora. It’s an ongoing experience and it looks different for every person. And as abstract and silly as it is to think that human beings are entirely defined by paperwork —or lack thereof— the political consequences are very real and they manifest physically on our bodies. For many people, it’s the difference between life and death.

Yet, at the time, the media was focused on two single narratives when it came to undocumented people: it was either illegal Mexicans flooding across the border to become leeches on the American taxpayer, or sad innocent undocumented college-bound youth who were brought into the country “through no fault of their own” by their irresponsible law-breaking parents. The nuances and complexities of our experiences were perpetually ignored or purposefully hidden by media. Academics, in their effort to publish papers that would humanize the undocumented experience, often fed into the latter “good immigrant” narrative. Politicians focused on highlighting the stories of those who their base would sympathize with the most. And in the process, our parents and everyone else who didn’t fit the “good immigrant” narrative were condemned to the shadows, cast to become the fodder that would feed Obama’s (and now, Trump’s) raging and well-oiled deportation machine.

This is why the original team of UndocuMedia first came together: to channel the rage of feeling powerless over our own narratives and lives, and create the types of media and messaging we knew were needed for our humanity and freedom. 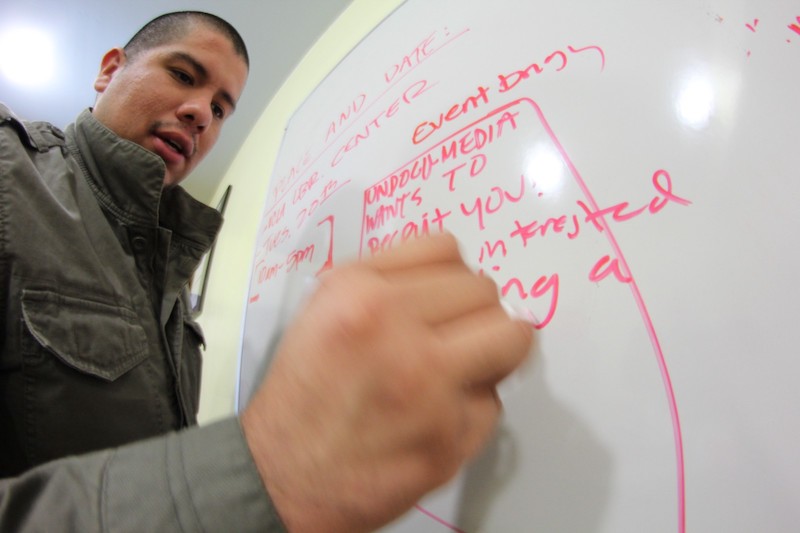 December 4, 2011: Julio Salgado drafts the layout for what would go on to be the flyer for the first UndocuMedia retreat.

At first, the gatherings were a set of skill-sharing trainings: videographers taught their techniques, bloggers walked organizers through how to set up an online presence. There were software trainings, hands-on workshops, and rounds of ideation about the next tech breakthrough that we could utilize to “document the undocumented.” But it quickly molded into a team of creatives who began to put together a framework that was about centering undocumented artists as advocates for themselves through the use and creation of various forms of media and art. 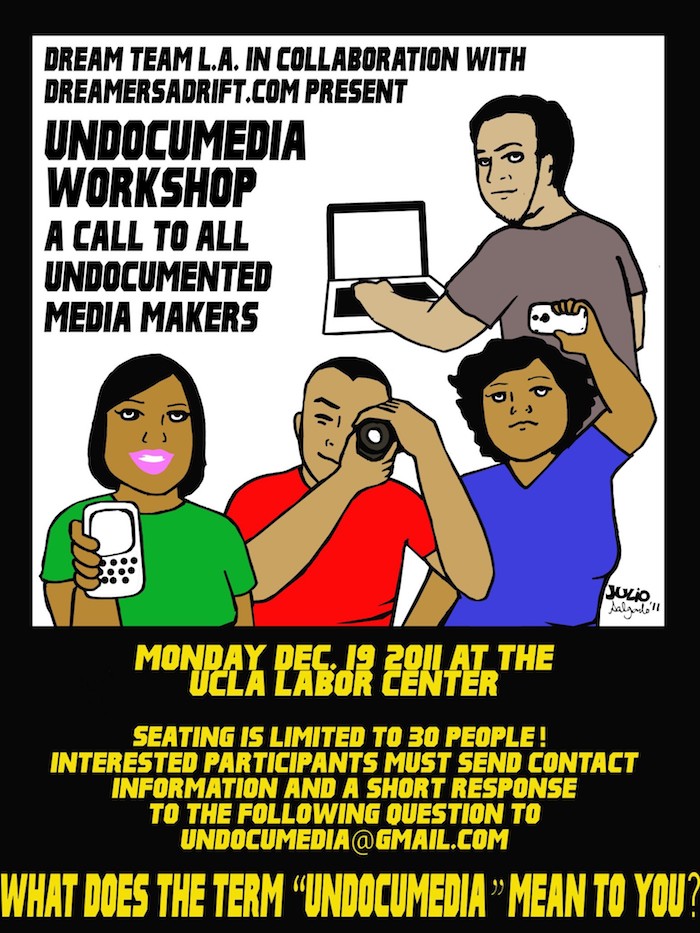 Original flyer for the first public UndocuMedia training as created by Julio Salgado in 2011.

Our mission was fairly simple and direct. We were working to:

Being the subject of someone’s documentary or news segment didn’t cut it anymore; we’d grown tired of our lives and experiences being used to elevate the work of others and not our own. We also needed to be behind the camera, directing, reporting, and working in the editing rooms.

We didn’t just want to see a few art pieces from one undocumented artist to be featured in a gallery as the token “barrio story.” We wanted to curate ENTIRE SHOWS featuring art from various undocumented visionaries from different backgrounds and disciplines, with undocumented organizers leading on all of the processes that it takes to open a quality show.

We didn’t want our trauma and our economic contributions be the focal points of why undocumented people should be considered as full human beings in this country; we wanted to be free to be the complex three-dimensional people that we are. We wanted to allow ourselves to exist and embrace the full spectrum of the human condition.

UndocuMedia was more than just stepping out of the shadows. It was about taking back the only thing that truly belongs to us: our stories.

To create content with this mission in mind, UndocuMedia realized the following principles:

This approach carried over into the work that every creator who underwent the UndocuMedia trainings went on to do in the years that followed. Whether it was crafting messaging and running campaigns in the immigrants rights sector, building out positions in non-profit organizations to open opportunities for undocumented youth, applying UndocuMedia framework in arts organizations to onboard and work with undocumented artists, creating rapid response work to engage in a media moment, supporting and elevating new content by undocumented creatives, it all began with adopting the mission and principles of UndocuMedia.

UndocuMedia never belonged to one single person or group of people. UndocuMedia, from its inception, was a result of countless collaborations and input from many different community members. UndocuMedia was created by the people and for the people in a time of chaos and uncertainty.

Ivan and Francisco have a moral obligation to return UndocuMedia to the immigrant community.

One response to “UndocuMedia: Humble Beginnings”