NAHJ Issues Final Statement on Washington Post’s ‘White, and in the minority’ Story

The following statement was issued on Thursday afternoon by the National Association of Hispanic Journalists (NAHJ). It is a follow-up to the concerns NAHJ had about a Washington Post story called “White, and in the minority,” a story we here at Latino Rebels believe was one very poor example of modern journalism. And just so you know, the Post is not really listening to anyone about this. FYI, the official Post response, is the same one we published earlier this week. 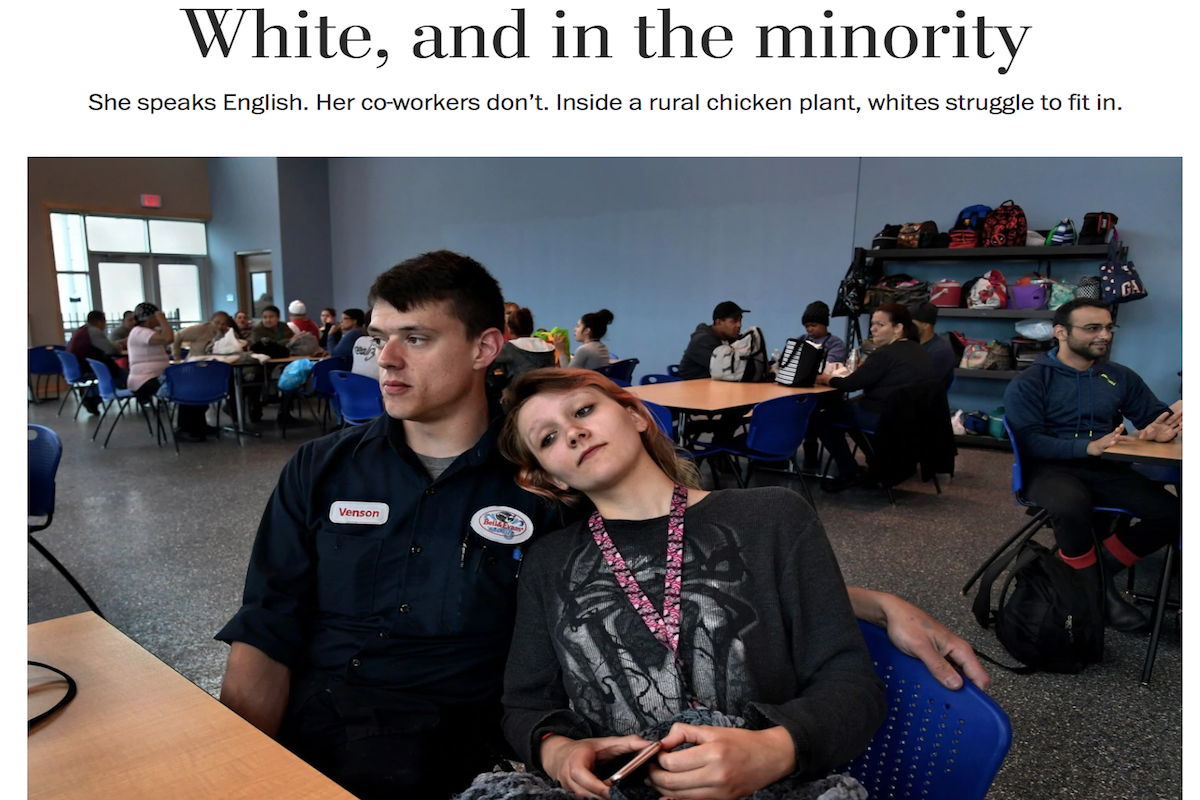 WASHINGTON, D.C. – NAHJ National President Hugo Balta led a phone call with The Washington Post‘s Executive Editor, Marty Baron, to address the story ‘White, and in the minority,’ published on July 31. NAHJ previously expressed concern regarding the ethics of journalism within the story due to an unbalanced viewpoint and lack of context.

After releasing the first statement, NAHJ leadership received a response from The Washington Post communications team:

“The Washington Post has a long tradition of narrative reporting on the experiences of immigrants and minorities in America, as recent work by a number of Post reporters vividly demonstrates. Many of their stories recount the experiences of immigrants as they adapt to America and confront discrimination, shifting policies and other challenges. Terrence McCoy’s story captured the perspective of those who feel displaced by demographic change, by conveying what it is like for two white Americans who must themselves adapt to a new America. McCoy portrays their fear, resentment and xenophobia—as well as their responses to the attempts of their Latino co-workers to interact with them. McCoy’s work will continue to explore the emergence of a multicultural majority in America.”

While NAHJ understands the author of the ‘White, and in the minority’ story intended to explore the cultural anxiety experienced by the white couple featured in the piece, mentions of the workers do not translate into a reflection of those voices.  It is unethical as journalists to humanize particular individuals, while leaving out context regarding others in an attempt to foster the understanding of one point of view.

During the exchange, both Balta and Baron took turns explaining their perspectives on the story in question. Baron stated many points in his conversation including, but not limited to:

Upon Balta’s request for The Washington Post to consider a follow-up series on the initial piece, Baron replied he would not assign a reporter to do a follow-up of the story.

The approval and justification of a story such as ‘White, and in the minority,’ reaffirms the mission of NAHJ to advocate for more Latinos in management and the importance of not only diversity, but inclusion in the newsroom.  To simply have stories edited by a person of color, does not guarantee fair and accurate coverage. Moreover, the dearth of Latino decision makers results in incomplete and tone-deaf journalism; an empowered committee, group or council of diverse individuals on the newsroom floor is an essential element in 2018.

“Story development from concept to completion must not only take into consideration narrative, but fairness and accuracy, which this piece is lacking,” said NAHJ President Hugo Balta.  “While I understand that Mr. Baron’s position on the intent of the piece was not to fan flames of division in this country, the necessity of diversity and inclusion is clearly not recognized nor understood in this instance.”

“It has left those applauding this piece shortsighted,” he added.

The NAHJ leadership thanked Marty Baron for his time to speak about the significance of the industry’s concern and expressed their ongoing commitment to working with the newsroom leaders in the future.

In a piece about the Post piece published Thursday by the Columbia Journalism Review, Balta added more details about his conversation with Baron: “It is frustrating to try to explain to news managers that are overwhelmingly white and male that there is a huge gap between intent and impact. And not acknowledging that storytelling with a narrow focus is feeding into the continuing polarization of a community —key to the future of this country— is frustrating. Newsrooms will continue to miss the mark in doing basic storytelling that’s fair and accurate until they do a better job at being inclusive of the diversity they have within those newsrooms.”